Skip to the content
HomeWritten PostWilliam Goldman’s Adventures in the Screen Trade! 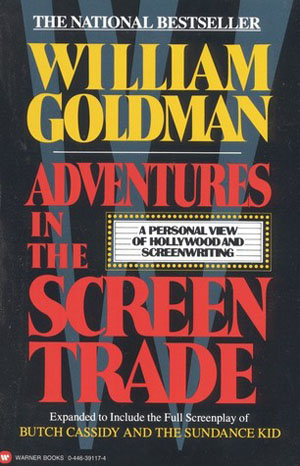 I just finished Adventures in the Screen Trade, and let me tell you: it is magnificent!  This is a must-read for anyone interested in behind-the-scenes stories of how movies get made, as well as the art of writing.

The book is a combination of two very different goals: spinning yarns about Mr. Goldman’s many wild experiences in Hollywood and providing instruction on how to write.  (Mr. Goldman’s focus is on how to write screenplays, but many of his points are applicable to writing of any kind.)  Both aspects of these books are wonderful and ridiculously enjoyable.

The book is divided into four sections.  The first section is a somewhat randomly-ordered description of many of the different types of players in Hollywood (directors, producers, studios, stars, agents, etc.), as well as Mr. Goldman’s ruminations on other aspects of the biz (meetings, etc.)   One might think that this would be of zero interest to someone not interested in pursuing a movie career — but one would be wrong!  Within the first thirty pages I was hooked.

Mr. Goldman’s writing style is conversational and fall-on-the-floor hilarious.  This is not a dry tome — the book truly feels like Mr. Goldman is right there chatting with you, with his chair back and his feet up, telling funny and horrifying stories of all the crazy Hollywood bullshit he’s experienced over the years.  And boy oh boy does he have some wild stories to tell.

The second section serves as something of a memoir of Mr. Goldman’s years as a screenwriter, including his experiences on All The President’s Men, Marathon Man, The Right Stuff, The Stepford Wives, and several other films that I hadn’t ever seen.  This section of the book is FASCINATING.  I think it’s my favorite part of the book (though it’s all good)!  Mr. Goldman is brutally honest, describing his experiences on movies that came out great (All The President’s Men) and those that, well, didn’t (The Stepford Wives).  This part of the book contains story after story of the behavior of stars and producers that flat-out astounded me.  It’s a wonder that ANY good movies get made in this environment!!  Most of this stuff is very funny, though you can also sense Mr. Goldman’s pain in a lot of these moments as he describes the long torturous process of a screenplay’s journey, through maaaany other hands, into (maybe) being an actual movie that you can see in a theater.  (When he describes what he calls “a gutless betrayal” by Robert Redford during the making of All The President’s Men, you can tell that it still hurts.)

Aside: I learned something in this section about the film adaptation of All The President’s Men that floored me.  I’ve seen the film a number of times, and I’ve always loved it.  But something has always seemed off to me about the ending.  The last major sequence in the film depicts the one major misstep that Woodward and Bernstein made in their investigation of Watergate.  It’s a dramatic and wrenching moment.  But the film ends, in a way that to me has always felt out-of-left-field sudden.  I’ve always felt the ending came way too fast, in what felt like we were still in the middle of the story.  Lo and behold, Mr. Goldman admits that, in an attempt to provide a structure to his adaptation of the lengthy and complex book, that he decided to end the movie in the middle!  Mr. Goldman writes of how he felt this was a dramatic beat to end on, and that, because the audience knew that Woodward and Bernstein were ultimately successful in their investigations, the audience would be able to fill in the rest of the ending on their own.  Wow!  That reasoning makes sense for the time, but for me watching the film decades later, I find that the sudden ending leaves me feeling incomplete and unsatisfied.  At least now I finally know why!!  End aside.

The third section of the book is a deep dive into the screenplay of what was probably, at the time, Mr. Goldman’s most successful (creatively and financially) project: Butch Cassidy and the Sundance Kid.  (Rob Reiner’s adaptation of The Princess Bride hadn’t happened yet when this book was written.)  Mr. Goldman presents a number of fascinating behind-the-scenes stories from the creation of this screenplay and the film, and then the screenplay in its entirety.

(Full disclosure alert: I must admit that I skimmed the screenplay, since my primary goal in reading this book wasn’t to learn how to write screenplays.)

When I arrived at the full screenplay for Butch Cassidy, I thought I was done reading the book.  But there’s a fourth section that follows, that I found intriguing and hugely enjoyable.  In an effort to both explore the art of adapting a prose story for the screen, as well as an exploration of the other important contributors to a finished motion picture beyond just the screenwriter and the director, Mr. Goldman does something quite fascinating.  He presents a short story he’d written years earlier, called Da Vinci, and then a screenplay for an adaptation of that story, written specifically for this book.  Then, Mr. Goldman interviews five key collaborators he’d worked with in the past — a designer, a cinematographer, an editor, a composer, and a director — both to get their feedback on his script and also to explore their very different viewpoints on making movies.

I adored Mr. Goldman’s short story, Da Vinci.  The joy I got from that story was a delightful surprise here in the final section of this book.  And the interviews that followed were fascinating.  I loved hearing from these talented craftspeople and seeing the very different ways they reacted to Mr. Goldman’s draft screenplay, identifying its strengths and weaknesses as well as the challenges in bringing it to life on screen.  (Hilariously, the fifth and final person interviewed, George Roy Hill, absolutely hated Mr. Goldman’s draft screenplay.  That Mr. Goldman includes Mr. Hill’s “withering” comments is both brave and a powerful example of the pain artists go through when someone criticizes their work.)

This was a fantastic read, and I highly recommend it.  I’m not planning on pursuing a career as a Hollywood screenwriter, but the book is filled to overflowing with wonderful tips and lessons from Mr. Goldman about how to be a good writer, in whatever media in which you choose to work.  And, as someone who loves movies, I delighted at all of the juicy behind-the-scenes stories of Hollywood craziness contained within.  Most of all, I adored Mr. Goldman’s writing style, and the way the book allowed me to feel as if I was truly getting to know him, listening to him recount these tales of his adventures in Hollywood as if he was speaking directly to me.