Skip to the content
HomeWritten PostStar Trek: Hearts and Minds 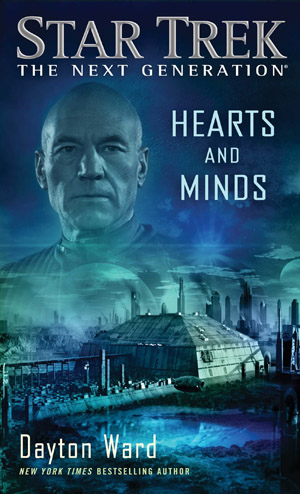 With his novel Hearts and Minds, author Dayton Ward has returned again to the world of From History’s Shadow, his spectacular novel that explored the secret history of aliens on Earth in the twentieth century.  I adore that novel, which was a masterpiece of Star Trek continuity, weaving together plot-threads and characters from across the many Trek TV series into a fantastic, clever new story.

While I would have loved to have gotten a straight sequel to that novel, in Mr. Ward’s two follow-up books he has chosen not to continue with the main characters from From History’s Shadow, but rather to, for the most part, introduce new characters and situations while telling a similar type of story, with parallel action set in Earth’s past as well as in the present-day of the Trek universe.

And so, in Hearts and Minds, as he did with Elusive Salvation, Mr. Ward has written a sequel that is more of a thematic sequel rather than a direct follow-up.  With the exception of the Vulcan Mestral, a character introduced in the Enterprise episode “Carbon Creek” who has appeared in all three Forgotten History novels, Mr. Ward has again introduced a whole new cast of characters, heroes and villains, for us to follow.  And in another difference, while the Enterprise side of Mr. Ward’s first two stories in this series took place in Kirk’s era, this one is set on board Picard’s Enterprise, at approximately the same time as the events of David Mack’s novel Section 31: Control.  (As such, this book is set at the leading edge of Pocket Book’s post-Nemesis-set continuity of new Star Trek stories.)

Hearts and Minds is a great book.  It tells a fascinating story in which it appears that a secret mission, unbeknownst to the human population of the time as well as 24th century historians, might have led to the nuclear near-annihilation of an alien world.  The way the novel slowly peels back the truth of those events is a great mystery and a wonderful spine for the story, putting Captain Picard in a real tough spot.

While Hearts and Minds fits nicely into Mr. Ward’s own Forgotten History trilogy of books, the novel also feels very much of a piece with the continuing post-Nemesis saga of Star Trek books, moving forward the stories of the characters from Next Generation, Deep Space Nine, and Voyager.  Mr. Ward’s novel found many opportunities for the continued development of the Enterprise command crew, with nice moments for Worf (who has to exercise patience and diplomacy when Picard and the Away Team are taken prisoner), Geordi, Taurik, T’Ryssa Chen, and Dina Elfiki.

Speaking of novel continuity, it was nice to see the events of the end of Section 31: Control finally catch up to Picard at the end of this book.  I hope the ramifications of this are explored further in future TNG novels.

One aspect of the novel that confused me were the events in the early part of the story in which Admiral Akaar makes Taurik privy to certain secret information rather than Picard.  From where did Akaar get his info?  Why tell Taurik rather than Picard?  There is an allusion to Taurik’s pre-existing knowledge of future events, which he obtained in Dayton Ward’s earlier novel Armageddon’s Arrow, making him the most trustworthy person to have this secret information.  But that doesn’t ring true to me.  How could Taurik possibly be more trustworthy than Picard?? Also, it doesn’t seem that any of the info that Akaar gave Taurik wound up being at all helpful in the unfolding mission, so I don’t understand the point of any of this.  I’ll also comment that while I appreciated that this book took up the plot point from Armageddon’s Arrow of Taurik’s having inadvertently discovered information about the future, the events of this book don’t actually tell us anything more than we knew from Armageddon’s Arrow, so I hope this plot point will be picked up, and better explained, in a future novel.  As of now it feels like a bizarre loose thread from both of those novels.

I was somewhat surprised that the novel ended without Mestral and Kirsten Heffron’s learning the truth about the secret mission launched by General Markham in 2044 to destroy the Eizand home planet.  It seems tragic for them to never know what actually happened, and especially disheartening for Mestral, after a century on Earth, to think that humanity might have been responsible for the annihilation of another world.  I was surprised the story was left that way.  I have loved the way Mr. Ward has developed these characters and I grew to love them, so I was sad that the book left them in a place that, to me, felt like a sad ending.

I did love the final chapter with Mestral, reunited at last with Gary Seven.  That was a lovely, emotional moment and a beautiful way to close out the story.

I was intrigued that the book leaves open the question of how long the Aegis (the organization behind Gary Seven) continued to operate on Earth after the 21st century.  Are there still Aegis agents on Earth in Picard’s time?  This would be a great topic for a future story!

I found it somewhat weird how the book glosses over the events of World War III, a huge event in the Star Trek timeline. Was Mr. Ward reluctant to pin that down to specific dates, as our real life era creeps ever closer to that part of Star Trek’s fictional history?  I was under the impression, from the fleeting canonical references we’ve gotten over the years to Earth’s third World War, that the conflict spanned decades in the mid twenty-first century, in the years before first contact with the Vulcans (as depicted in Star Trek: First Contact) in 2062.  This novel’s flashback chapters take place during those years.  But the book’s twenty-first century chapters go right through that time period without our seeing any evidence of this enormous global conflict.  It’s just briefly alluded to, at the very end of the book, as something that happened.  For a novel, and a series, so steeped in the minute of Star Trek history, this seemed like a bizarre choice (and a missed opportunity) to me.

Particularly considering how, throughout much of the rest of the book, I was bowled over by Mr. Ward’s attention to Trek continuity.  I loved the way Mr. Ward, in reconstructing this mostly unexplored era of Trek history, was able to incorporate references to the launching of the Ares IV mission (from the Voyager episode “One Small Step”), the Charybdis (from the Next Generation episode “The Royale”), and Friendship One (from the Voyager episode “Friendship One”).  (Actually, at first, I thought the reference to a lost astronaut on an Ares mission was a reference to Andy Weir’s wonderful novel The Martian, but actually that was established in Voyager‘s “One Small Step” long before Mr. Weir’s novel was published!!)  I liked how Mr. Ward also worked in a reference to the ECON (the Eastern Coalition) mentioned as a faction during World War III in the premiere episode of Star Trek: The Next Generation (“Encounter at Farpoint”), as well as in Star Trek: First Contact.

I loved how this novel, following up on Mr. Ward’s previous novels, as well as the novels of Greg Cox and Christopher L. Bennett, have continued to explore the Aegis (Gary Seven’s mysterious employers, as introduced in the Original Series episode “Assignment: Earth” and named by Howard Weinstein in DC Comics’ Star Trek comic book series from the eighties and nineties).  I was intrigued by the introduction of the idea of a human character who had become embittered against the Aegis because, despite her work for them, Gary Seven and the Aegis did not take action to prevent her father’s death on 9/11, despite the Aegis’ willingness to interfere elsewhere in human history (such as saving Shaun Christopher).  That’s a fascinating moral conundrum and a logical extension of what we know of the Aegis from previous stories.

Speaking of Shaun Christopher, I was glad he got a few mentions in the book, and also that his mission to Mars on the Lewis & Clark (hinted at in the Original Series episode “Tomorrow is Yesterday” and explored in Greg Cox’s novel The Rings of Time) was also referenced.  Once again, Mr. Ward’s attention to detail was masterful.

I have thoroughly enjoyed all three novels in Dayton Ward’s loose Forgotten History trilogy.  I’d love for Mr. Ward to continue with more, but if Hearts and Minds is the conclusion, I am very satisfied.