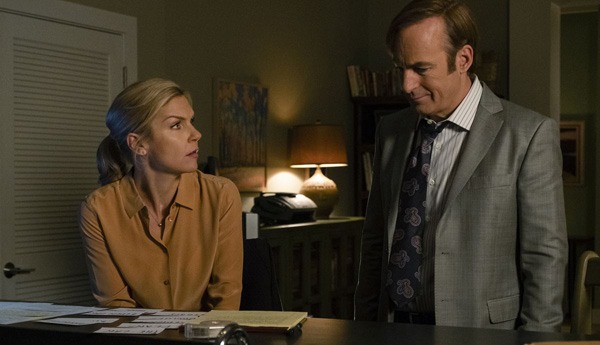 They made us wait over a year after the end of Better Call Saul season three for the start of season four, but boy was the wait worth it.  Season four was another home run from this show, one of the rare spinoffs to be as good if not better than its fantastic, much-loved predecessor.

When Better Call Saul premiered, I was surprised that Bob Odenkirk’s character had a different name and a very different personality than the Saul I had come to know and love on Breaking Bad.  At first I was antsy for Jimmy McGill to transform into Saul Goodman, but the genius of Better Call Saul is that I very quickly grew to love Jimmy so much that his eventual transformation into the morals-free, criminal lawyer (emphasis on criminal) Saul Goodman became something I started to dread.  On the mothership, Breaking Bad, Walter White’s transformation from “Mr. Chips to Scarface” was a tragedy, but though I knew things wouldn’t end well, I was generally eager to see Walt break fee of his inhibitions and embrace his dark side.  But on Saul, I have been fearing it.  I want to see the kind-hearted Jimmy, and also Kim Wexler (who has become the character on the show I am most rooting for), to somehow find a happy ending, even though we know from Breaking Bad that this is (most likely) not going to happen.

Here in season four, co-creator and co-showrunner Peter Gould stepped into the forefront, as Vince Gilligan (the mastermind behind Breaking Bad who also co-created and co-ran Saul for seasons one through three) stepped back from showrunning to focus on other projects.  This might have been a cause for concern, but I didn’t detect the slightest shift in quality.  If anything, the show was even better this year than it had ever been.

The first season of Saul had a lightness that I loved, in contrast to the grim, often hard-to-watch Breaking Bad.  As Jimmy McGill has slowly slipped into darkness, the show has darkened, with season four representing the show at its most emotionally wrenching so far.  I was absolutely gripped, from start to finish.

After the season three finale, I wondered if Michael McKean was truly out of the show.  I miss this great actor, but I am glad they didn’t walk back the events of that finale in an attempt to maintain the status quo.  I am pleased that the writers had the courage to allow the show, and the charaters, to move forward.  (They did find a way to bring Mr. McKean back briefly, in some heartbreaking flashbacks in the finale.)

Bob Odenkirk continues to impress me with the subtleties of his performance.  Mr. Odenkirk is an extraordinary comedic actor, but his dramatic skills were on full display in this season.  Rhea Seehorn, meanwhile, has become this show’s secret weapon.  Her Kim Wexler is now the character I am most rooting for, and most worried about.  More than any other character, I desperately hope that Kim is able to somehow escape the end of this series with something approaching a happy ending.  (If I let myself care anout who does/doesn’t receive Emmys or Oscars, I would be shouting at the rooftops about the injustice that Ms. Seahorn has never been nominated for an Emmy for this role.)

When Better Call Saul began, the story of Jimmy McGill had several points of intersection with that of Mike Ehrmantraut (Jonathan Banks), but for quite a while now Mike’s story has been completely separate from that of Jimmy.  (Is there another show which has told two almost completely separate stories over the course of multiple seasons?)  One of the many things that this show does incredibly well is the way that both halves of the show are so strong, so that I never get impatient for one half to end so I can return to the other.  (I was pleased that this season did allow Mike and Jimmy’s story to intersect once, when Jimmy tried to get Mike to help him steal the figurine.)

Mike’s descent into crime has been an even more gradual story than that of Jimmy’s, but this season saw just as many critical moments in Mike’s transformation as it did for Jimmy’s.  We saw Mike step fully into the role of Gus Fring’s henchman (which is how we met him in Breaking Bad), and his cold-blooded murder of poor Werner in the finale was chilling and so sad.

Speaking of Gus, I am so happy that Giancarlo Esposito has been incorporated into this show, reprising his iconic role from Breaking Bad.  I loved every moment with Gus.  I wish we saw him even more frequently!  I’d love to be allowed to get more deeper into his psychology, but the show has made the choice to keep Gus as a distant and enigmatic villain, as he was in Breaking Bad.  I understand this choice (even though that’s meant we haven’t gotten much deeper into Gus than we did back in Breaking Bad).  I spent a while this season wondering why Gus seemed to assist in Hector’s recovery, rather than letting him die… eventually we understand that Gus want Hector to suffer for a long, long time.  That is cold!

Speaking of whom, I’ve loved getting to see more of the loathsome Hector Salamanca (Mark Margolis).  It was satisfying getting to see how Don Hector fell into the invalid state in which we saw him in Breaking Bad.  While I usually hate the way prequels tend to over-explain tiny detals that I never really needed to know about, I have to admit that my heart lept in pleasure when Lalo gave Hector his iconic bell (in the season’s penultimate episode, “Wiedersehen”).

Michael Mando’s character Nacho has been lingering around the edges of this story for a while now, since the very beginning of the show.  I was delighted that, in the first half of this season, he stepped into the center of the story in a big way.  Poor Nacho became one of the more sympathetic characters on the show, caught between Hector and Gus.  I was disappointed that Nacho sort of vanished from the show in the final run of episodes.  I hope we see lots more of his story in season five.

In the Breaking Bad episode that first introduced Saul Goodman, Saul mentioned Nacho and another character named Lalo.  To the delight of hardcore Breaking Bad fans everywhere, Lalo was finally introduced here in season four.  I loved this new character, who seems at the same time to be the friendliest Salamanca we’ve met so far, and also the most dangerous.  I can’t wait to see where Lalo’s story goes from here.  We know that Lalo will still be in play during the Breaking Bad era, so he is probably going to continue to be a problem for Nacho, and also Gus and Mike, for the forseeable future.

While watching season, I spent a lot of time speculating about where and how the characters on this show will end up come the end of the series, when the timeline finally intersects with that of Breaking Bad.  Is there any way that Kim is still together with Jimmy during the Breaking Bad years, even though she was never mentioned on that show?  It seems unlikely, but you never know what these clever writers have in mind.  At the end of “Let’s Do it Again,” when Kim threatens to break bad, telling Jimmy “let’s do it again” after they pull off a scam, I thought I saw a possibility for Jimmy and Kim to still be together when the show catches up to Breaking Bad.  I’d been assuming all along that she would leave Jimmy when he finally became Saul.  But now a new possibility occurred: maybe Kim was a grifter at heart, just like Jimmy/Saul?  Maybe she COULD still be with Jimmy/Saul during the Breaking Bad years?  (However, critic Alan Sepinwall suggested a far darker take — that Kim might follow Jimmy/Saul into criminal lawyering, but get caught and have her life destroyed, which is why she was not still around during the Breaking Bad days.  Oy!  I hope that’s not what happens!!)

* I loved the scene in “Quite a Ride” that took place during the Breaking Bad era, showing us a moment we’d never seen before: Saul and Francesca frantically packing as Saul prepares to go into hiding and change his name.  That was such a surprising moment!!

* The post-Breaking Bad “Cinnabon Gene” scenes continue to be a wonderful tease.  I’d love for the show to start spending more substantial time in that timeline, rather than the drip-drip teases we’ve been getting.  Will we eventually get a whole episode, if not multiple episodes, set entirely after the events of Breaking Bad?  I hope so!

* We didn’t get to see too much of Howard Hamlin (Patrick Fabian) this year, as the story has moved away from him.  But I loved every short moment we got with Howard this year.  I am amazed how the great writing and Mr. Fabian’s great performance have transformed Howard from a character we hated into one who is, now, so sympathetic.

* I did not expect such a huge chunk of this show to be devoted to the story of the construction of the superlab Gus had for Walter White, but I loved that choice!  Another great example of this show’s incredible attention to detail, and the way they’re willing to take the time to show us exactly how things get from A to B to C.  I loved learning about the enormous effort it took to construct that gorgeous underground lab we saw in Breaking Bad.

* I loved the glimpses we got of Gale (David Costabile) this season!

* Wow, how about that incredible montage in “Something Stupid,” in which nine months unfolds, and we see Kim and Jimmy gradually drift apart?  Amazing.

The season finale, “Winner,” gave us the moment we’d been waiting for since the series premiere: Jimmy’s official transformation into Saul Goodman.  And yet the story is far from over.  (Kim’s look of shock when she realizes that Jimmy’s speech before the appeals board was insincere was one of the most heartbreaking events of the show’s run.  What a moment.)  I am counting the days until season five…!