Skip to the content
HomeWritten PostCatching Up on 2017: Josh Reviews Three Billboards Outside Ebbing, Missouri 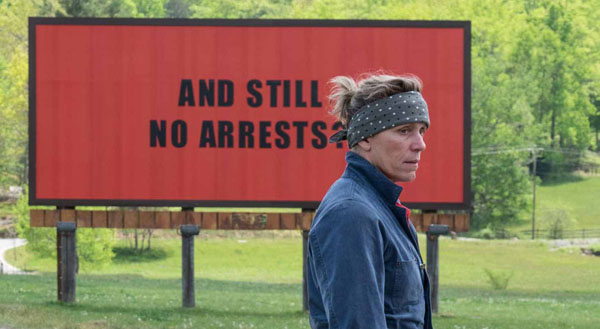 Catching Up on 2017: Josh Reviews Three Billboards Outside Ebbing, Missouri

I missed Three Billboards Outside Ebbing, Missouri when it was first released, but I was able to finally catch it right before the Oscars. I am glad I did. The film is a fascinating, funny, heart-wrenching character study about a group of flawed men and women in a small town in Missouri and the way a tragedy brings some of them together and pulls some of them apart.

The film is anchored by the fierce, magnetic performance of Frances McDormand as Mildred Hayes. Angered by the police’s inability to identify the person who murdered her daughter, Mildred pays for three huge billboards that excoriate the town’s chief of police, Bill Willoughby. There are a lot of great performances in this movie, but without question Three Billboards belongs entirely to Ms. McDormand. She creates in Mildred a towering presence, giving her tremendous strength and endurance while also showing us all the ways that she has been broken and hollowed out by the murder of her daughter. Ms. McDormand is well-served by Martin McDonough’s fantastic script, which allows Mildred to be heroic in her strength while also, at times, despicable in the way she allows hate to drive her to some ugly actions. Ms. McDormand plays every note of the script and the character to absolute perfection. She deserves every accolade she received in the end-of-2017 awards season.

The film could have rested on Ms. McDormand’s performance alone, but what makes it great is that it didn’t. The film is populated by a number of multi-faceted, fascinating characters, brought to life by a wonderful ensemble.

I have been a fan of Sam Rockwell’s ever since Confessions of a Dangerous Mind, and he is fantastically compelling as the dim-witted, violent, racist police officer Dixon. This is a tricky role, in that Mr. Rockwell’s comedic skills make Dixon a very funny character at times, even though he is probably the most hateful main character in the film. Mr. Rockwell walks that line perfectly and, just as Ms. McDormand does, allows the audience to see many different sides of Dixon. Some have criticized Mr. McDonough’s film for this character, arguing that the film doesn’t explore the important themes of racism and bigotry that this character introduces in enough depth. Others criticize the film’s ending for giving Dixon a redemption that he doesn’t earn. I didn’t see it that way at all. Without going into spoilers, I will say that I don’t think Dixon is redeemed at the end of the film. I just think that the film, and Mr. Rockwell’s nuanced performance, allows us to see, by the end, the human being inside this pitiable, disgusting man. This is part of what makes Three Billboards such a complex and interesting film, for me.

Woody Harrelson is equally magnificent as Sheriff Willoughby. The film starts in Mildred’s point of view, and so of course we accept, at first, that the chief is either evil or incompetent, or both. But the film wisely establishes, very early on, that the chief is not a terrible man. He is no hero; he is flawed, as is every other character in the film. But it doesn’t seem that the police’s inability to find the man who raped and killed Mildred’s daughter was due to the chief’s failings, but rather the harsh reality that these sorts of crimes are often difficult to impossible to solve. And then, of course, just as we’re starting to have sympathy for the chief and see him as, just maybe, a good man, he takes an action about halfway through the film that shocked me. Once again, I was impressed at the way Mr. McDonough’s script was able to create characters with many different sides, and Mr. Harrelson’s compelling and humanistic performance takes us along on this journey.

There are so many other great performances in the film. Peter Dinklage plays James, who appears to be one of the only people in town who actually likes Mildred. John Hawkes plays Mildred’s ex-husband. Lucas Hedges (so impressive last year in Manchester by the Sea, and who also did great work in Ladybird) plays Mildred’s son Robbie. Željko Ivanek plays the hapless local police desk sergeant. The great Clarke Peters (The Wire, Treme) pops up towards the end in a role which I won’t spoil. And there are many more beyond them.

Martin McDonough is a talented writer/director. His 2008 film (I can’t believe it was so long ago!) In Bruges was very good, but Three Billboards Outside Ebbing, Missouri is a far more complex and mature piece of work. I am very glad to have seen it (after several attempts over the previous months that never worked out for a variety of reasons). This is a film that gives the audience a lot to digest and discuss, which is always something I appreciate.

One last comment: when I saw the film, several audience members were noticeably, vocally upset by the note on which the film ended. But I felt the ending was just about perfect. Yes, there is much that the film leaves unresolved, but that feels very true-to-life for me. I felt the film gave us everything we needed to know, and the journey that brought those two characters to that car trip together felt rich and complete to me. I thought the last line of dialogue was fantastic, giving me lots to think and wonder about as I left the theatre. Bravo.