Skip to the content
HomeWritten PostCatching Up On 2018: Josh Reviews Song of Back and Neck 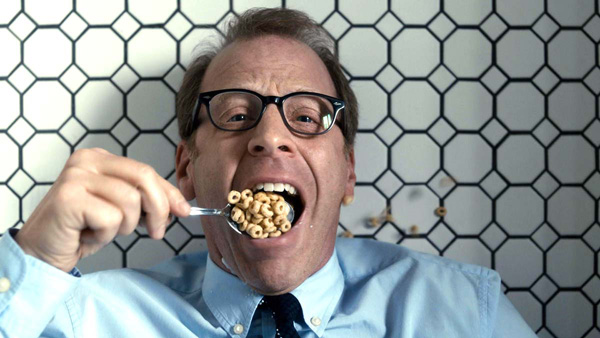 Catching Up On 2018: Josh Reviews Song of Back and Neck

Wait, what, I never got around to posting a review of one of my favorite films of 2018?  Time to remedy that immediately!  I’m talking about Song of Back and Neck, the small, sweet, funny, weird film written by, directed by, and starring Paul Lieberstein (Toby from The Office).

Song of Back and Neck is a wonderfully bizarre and idiosyncratic movie about a sweet, mousy man named Fred Trolleycar (Paul Lieberstein) who suffers from debilitating chronic back pain.  His journey to deal with that pain leads Fred to some delightfully unexpected places.  The film takes some wonderfully weird turns that I don’t want to spoil.  But I will say that the film allows Fred to form a strange and surprising connection with music (the “Song” in the film’s title does connect to some of what actually happens in the film, though not in the way you’d probably expect) as he goes on this journey that results in his facing some of the psychological wounds that he had tried to bury.

The film is loosely based by Mr. Lieberstein’s own personal experiences with back pain, and how he addressed what he discovered were the psychological underpinnings of his affliction.  I’m not sure I quite buy any of that, but Mr. Lieberstein makes a strong case for the truth behind his own personal experiences in this wonderful, lengthy in-depth interview on Kevin Pollak’s Chat Show, which is where I first discovered that this movie existed.  (Mr. Pollak’s wonderful, and deeply missed podcast led me to a number of great little films last year that I never would have known about, such as Jenna Laurenzo’s Lez Bomb.)

I was taken by this film right from the wonderfully funny opening sequence, in which we see the crazy lengths that Fred has to go through in order to get dressed and out the door in the morning.  The story that follows is funny and sad and sweet and moving.  I wouldn’t call this film a comedy, per se, but it is very, very funny at times.  It’s not a straight-up drama, either, though the film has some touching and painful dramatic moments.  There’s a slightly fantastical twist that the film takes at one point, but it’s all very grounded in the reality of life for real, every-day people.  It’s weird, but it all works.

Mr. Lieberstein is terrific in the leading role.  I always loved his performance as sad-sack Toby on The Office, and it’s fantastic to see Mr. Lieberstein in the center-ring spotlight of his own movie.  I also knew, by paying attention to the credits on The Office, that Mr. Lieberstein was clearly a terrific writer, and it’s fascinating to see what he has come up with when freed to create a story all his own.  The film is a fantastic showcase for all of his skills, and he acquits himself well as director, writer, and actor.

The supporting cast is dynamite as well. Rosemary DeWitt (Rachel Getting Married, Your Sister’s Sister, La La Land) plays Regan, a woman with whom Fred strikes up a friendship that is surprising to both of them.  Ms. DeWitt is terrific in showing us the slow steps of Regan’s growing connection to Fred, and also in slowly revealing that although she seems on the surface to be a lot more together than Fred is, that she also is damaged in many ways.  It’s a wonderfully nuanced, gentle performance.  Paul Feig slays in several painfully funny scenes in which he plays Fred’s doctor, and Ike Barinholtz (Neighbors, Late Night, Brooklyn Nine-Nine) is also great in the small role of a nurse.  Brian d’Arcy James (Spotlight, Molly’s Game, First Man) is perfect as an anti-Fred type character who emerges as an unexpected obstacle late in the film.

Mr. Lieberstein has produced a very personal and unique piece of work.  I’m so glad to have seen it.  I highly recommend you give this film a chance.  (It’s available on Amazon Prime!)