Skip to the content
HomeWritten PostCatching Up With Powers: Bureau 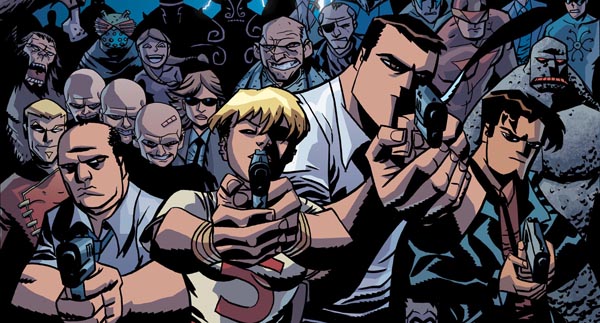 Catching Up With Powers: Bureau

Brian Michael Bendis and Michael Avon Oeming’s comic book series Powers has been, since it’s inception way back in 2000, one of my very favorite comics.  The series’ hook is fiendishly simple: it’s the story of cops in a world of superheroes.  Christian Walker and Deena Pilgrim are homicide detectives who investigate murders that are connected to Powers — that is, super-powered people — either the death of a Power, or the death of a normal human being at the hands of a Power.

Mr. Bendis’ mastery of dialogue combined with Mr. Oeming’s gorgeously stylized artwork caught any interest immediately from issue #1, and I have loved the series ever since.  It’s helped that, ever few years, Mr. Bendis and Mr. Oeming like to turn over the applecart of their series and transform the status quo.  This keeps the book feeling alive and vibrant, as opposed to so many other major long-running comic book series, where the characters can feel as if they’re treading water.

I’ve written about Powers before.  My first look at the series was here, back in 2010.  My review of the first two runs of Powers can be found here.  My review of Powers volume three, which ran from 2009 to 2011, is here.  Powers also was adapted for TV, running for two seasons on the Sony Playstation Network.  I eagerly watched the first season, but was a bit let down.  Nevertheless, I wanted to watch season two, but somehow I never quite got around to it.  I still very much intend to watch those episodes someday.

Powers was unfortunately not included in the recent launch and re-launch of several creator-owned books by Mr. Bendis after his move from Marvel to DC.  This is particularly a shame because the previous run of Powers, published by Marvel’s Icon imprint, cut off in the middle of a story.  I really hope this gets finished someday!

After reading these new series Mr. Bendis has recently launched at DC (Pearl and Cover, as well as continuations of Scarlet and The United States of Murder, Inc. — all four of which, by the way, are terrific and well worth your time), I decided to dig back into Powers and reread the series from the beginning.  I was blown away all over again.  I love this series.

Since I’d previously written about Powers volumes 1-3, I thought I’d pick things up with my thoughts on Powers volume four — Powers: Bureau.  These 12 issues were published from 2013-2014.

As I wrote in my previous review, I thought Powers volume 3 was the weakest point of the series so far.  Mr. Oeming’s usually spectacular artwork seemed rushed and sloppy (particularly in the first several issues of the run); the flashbacks showed Walker acting in what seemed to me like a very out-of-character way; and the conclusion in issue #11 felt incredibly rushed, with interesting story ideas and characters quickly brushed aside.

After Powers volume 3 #11, the series relaunched as Powers: Bureau.  This “season” of Powers would run for twelve issues.  Immediately this run felt to me like a return to form.  I loved it. 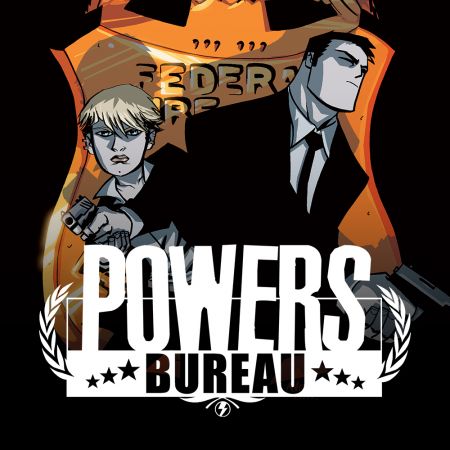 Mr. Oeming’s artwork was right back where it had always been for me: incredibly impressive.  Right away in Powers: Bureau #1, there were so many spectacular images that all of my complaints about volume 3 were washed away.  From the shot of the unfortunate FBI agent’s stomach exploding (after contact from Powers sperm — yuck) to that great closing full-page spread of Walker & Nick Roberts in Triphammer’s lab, I was hooked.  And there was so much more great stuff to come.  I particularly love the full-page spread at the end of issue #8, a long-shot of the plane Walker and Pilgrim were taking to the West Coast, leaving poor Calista alone at a tough moment.  (And don’t think I didn’t notice how the panel of Calista fallen to the ground on the previous page of issue #8 had her in the same pose as the death of the original Retro Girl, a call back to the last page of the series’ very first issue.  Nicely done.)  This series also featured some of Mr. Oeming’s best covers.  Every cover of this run was a masterpiece, an iconic Powers image.  Great stuff.

Following the devastating events at the end of volume three, Powers: Bureau re-set the series by having Walker and Pilgrim get “drafted” into working for the FBI.  With all Powers cases now considered Federal cases, it was time for these two homicide detectives to move up to the “big leagues.”  I liked this new twist to the series.  It was fun seeing the ways in which Walker and Pilgrim did and didn’t mesh with the FBI establishment and the new way of doing things.

Right away with issue #1, we’re thrown into a classic sleazy Powers case, in which someone is selling Powered sperm to women who want superpowered babies.  Unfortunately, some of these women are blowing up.  Ha, this is exactly the sort of envelope-pushing stuff that Mr. Bendis & Mr. Oeming made their bones on, and it was delight to see the series back in prime form.

I enjoyed the way this volume of Powers, especially the early issues, played around with the timeline, jumping forwards and backwards in time, sometimes by a few days, sometimes by a few years.  This was a new way of telling Powers stories, and I loved it.  It was interesting to see the story unfold not-exactly chronologically, and I loved the flashbacks to Walker and Deena specifically, showing more about what they’d been up to between volume 2 and volume 3 (which is when Pilgrim joined the FBI), and between volume 3 and this latest run.

Issue #7 is a fantastic stand-alone tale, about a woman who can create multiples of herself, who then starts murdering her multiples when they start living more successful lives than her own.  Wow!  This is classic Powers — a dark twist on the type of super-power that we’ve seen before in mainstream superhero comics.

Speaking of a dark twist to mainstream superheroes, I loved the character of “Extreme” introduced in the “Icons” storyline in issues #8-12.  This play on Cable and the designs of Rob Liefeld’s “Extreme” Studios from the nineties was note-perfect, most especially Mr. Oeming’s brilliant Liefeld-style double-page spread in issue #9 of Extreme and Diamond jumping into battle back in the day.  Amazing.

Issue #10 was a highlight of the series for me — a very dramatic, intense issue in which Walker and Pilgrim were set up to take the fall for the murder of a super-team.  Not knowing that the FBI wants Walker to go down, Pilgrim comes perilously close to incriminating herself instead.

If I have a complaint, it’s that just like the end of volume 3 felt way too rushed to me, so too did the last issue of Bureau.  This incarnation of Powers built to a whopper of a revelation: that Powers were secretly controlling the entire FBI organization that was supposed to be policing them.  That’s a fantastic twist.  But after the terrific issue #10, the series rushed towards its conclusion without much chance to explore that revelation.  Pilgrim is able to overpower Agent Lange and… that’s it?  What does this mean for the world?  Are the evil Powers still in charge?  Surely arresting Lange doesn’t mean that all the secret Powers have been defeated, right?  Are those evil behind-the-scenes Powers just letting Pilgrim and Walker walk free?  And whatever happened to Erika Broglia and Agent Meltzer?  It was a fun surprise to see young mobster Erika Broglia (who was involved at the start of volume three) again, but I didn’t quite understand how she was tied up in the whole Powers sperm business… and then she totally dropped out of the story at the end.  (We see her testing Agent Meltzer at the end of issue #6, threatening him with payback if he doesn’t get her out of jail — but then we never see her again!)  I hope future stories will give us better closure on Broglia & Meltzer.

Powers: Bureau wasn’t the end of Powers.  I’ll be back soon with my thoughts on Powers: volume five and also the Powers novel: The Secret History of Deena Pilgrim!