Skip to the content
HomeWritten PostChecking out the Star Trek: Picard Backstory 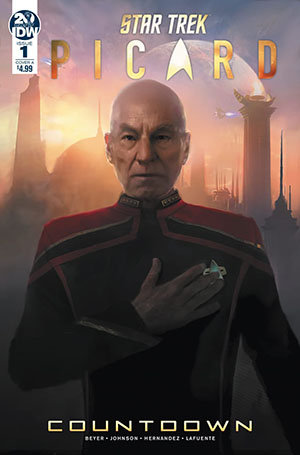 I was very lukewarm on the first season of Star Trek: Picard.  It was amazing seeing Patrick Stewart back in this role, something I never ever expected to see.  The rest of the cast was strong, and the production values were great.  But I thought the story-telling was, mostly, a mess, and I was disheartened by both the overall lack of attention to continuity and also by many of the choices made by the show’s creators regarding what happened to these beloved characters, and the overall Star Trek universe, in the decades since the end of Next Gen.  When I read about the comic-book series Picard: Countdown, and the new novel Picard: The Last Best Hope, I was interested but dubious.

I have read and loved many Star Trek comics and novels over the years.  In the comics world, Peter David’s long run on DC Comics’ Star Trek series in the eighties and nineties is spectacular, and the amazing graphic novel Debt of Honor by Chris Claremont and Adam Hughes is one of my favorite non-canon Trek stories of all time.  In the novels world, readers of this blog likely know that I deeply love the interconnected series of Trek novels that Simon & Shuster has been publishing for the past decade-plus.  But one of the reasons those novels have been so great is that they were free from having to adhere to the status quo of in-production new Trek shows or movies.  I have usually found that books/comics/etc. based on shows that are currently running tend to be lame, for the most part, because they’re not free to risk contradicting anything the show might do in the future.  But I have enjoyed IDW’s previous Countdown mini-series (which connected Spock’s appearance in the 2009 Star Trek film with the post-Nemesis status quo), and I was excited that Picard: Countdown was co-written by Kirsten Beyer, a talented Trek novelist who is also one of the Picard series’ co-creators.  And Una McCormack, who wrote Picard: The Last Best Hope, is one of my favorite Trek novelists.  So I gave both a try.  I’m glad I did, because both are terrific reads, and both are far more successful at telling an original story that fits well into pre-existing Trek canon, in my opinion, than the Picard TV series was!

Let’s start with the three-issue comic-book series Picard: Countdown.  This mini-series, written by Kirsten Beyer & Mike Johnson, and illustrated by Angel Hernandez & Joana Lafuente, tells the story of how Jean-Luc Picard met the two Romulans, Laris & Zhaban.  This is a key piece of backstory that I was shocked the series never gave us, after introducing the intriguing notion of two skilled Romulans working at Picard’s vineyard who apparently owed him a great debt.  The mini-series takes place during the attempted evacuation of the Romulan Empire, a mercy mission spearheaded by Admiral Picard.

The backstory of the Picard series is that this mercy mission was prematurely ended by the Federation after the Synth attack on Mars, which led to Picard’s resignation from Starfleet and much of the general misery and disarray we see in the galaxy during the time of the Picard series.  I wish the show had better developed this backstory, so it’s cool to see Picard and Rafi in action during this time period here in the comic.  The mini-series tells a compelling short-story of a mission to evacuate a Romulan colony that does dangerously awry.  I’d have loved to have had a few additional issues to better flesh out the story, but I’m very happy with these tight three issues that we got.  I loved getting to see Picard in command of this mission, on board a new starship, the Verity.  I loved that they included a few series with Geordi.  (Geordi wasn’t seen in the Picard series, but this mini-series establishes that, while Picard was on his mission in Romulan space, Geordi was overseeing the production of the new fleet at the Utopia Planitia shipyards, which is cool.)  The art is terrific, with strong likenesses of the characters and a crisp, clear style.  This was a very enjoyable comic book story! 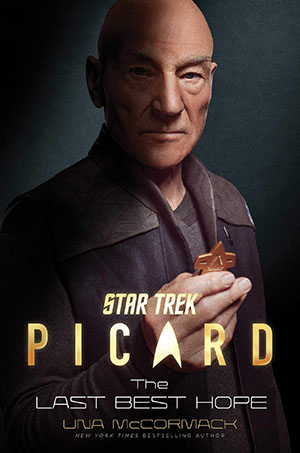 Una McCormack’s novel Picard: The Last Best Hope, is exactly the deep dive into how the status quo of the Picard series came to be that I wish we’d gotten from the show itself.  I have issues with the show’s basic set-up that I’m not sure it’d ever be possible to fully justify.  (As I wrote in my reviews, ultimately, this boils down to the fact that I just didn’t believe that Picard would completely abandon all of those Romulan innocents who he’d pledged to protect.)  That being said, Ms. McCormack’s ripping yarn does about as good a job as I could have imagined at justifying how the status quo at the beginning of the Picard series might have come to be.

The novel takes place over several years, from Starfleet’s first learning of the Romulan supernova, through several years of Picard and Raffi’s work leading a fleet of rescue ships into Romulan space in an attempt to save as many Romulans as they could, all the way to the tragic events that ended that mission prematurely and led to Picard’s resignation from Starfleet.

I enjoyed the epic scale of the story, and the way that Ms. McCormack fleshed out many of the characters we met in the Picard series as well as an ensemble of new ones.  It’s great to get to see Raffi in her prime, ably serving as Picard’s right-hand woman, and also to see everything she gave up to spend years assisting Picard on the Romulan rescue mission.  This helps explain how angry she was when she was first introduced on the Picard series.  I loved that Geordi, unseen in the Picard series, was a major player in the novel.  It makes sense that Picard would choose his trusted officer Geordi to play a key role in developing the technology and resources needed for the unprecedented size of this galactic rescue mission.

I loved that the Picard series picked up the character of Bruce Maddox, but I was bummed they didn’t actually wind up doing much with him.  So it’s fun here to get the full story of how Picard and Geordi roped him into their plan of developing Synths to help build the ships.  The Picard series established that the Federation was using Synths as a work force on Mars, which was a big surprise to me.  This seemed wildly out of character for the Federation, and inconsistent with the end of the classic TNG episode “The Measure of a Man”.  I’d expected that the show would explain that development, but that never happened.  The novel, though, gives us the full story of how these Synths came to be, and it works nicely with pre-established Trek continuity.  I also enjoyed seeing the development of Maddox and Agnes Jurati’s romantic relationship, an important piece of backstory suggested by the show.

It was a shock when that Starfleet admiral cursed at Picard in the series’ premiere episode.  I loved that Ms. McCormack made this unlikable one-note character into a major player in the book, giving us an arc to her story and showing us how and why she came to dislike Picard.  (And I like that the book establishes her penchant for what Spock would call “colorful metaphors”.)  I also like that Ms. McCormack develops some rationale for how and why members of the Federation opposed the Romulan rescue mission.  The book explains, far better than the series did, why the Synth attack on Mars meant the end of the Romulan mission.

I was curious to see if Ms. McCormack would try to connect her story in any way to the long-running continuity of Simon & Shuster’s Star Trek novels.  Unsurprisingly, she did not do that.  While Ms. McCormack does take a few cues from that continuity by, for instance, establishing Starfleet’s Commander in Chief as an important player in the story, she introduces a new character as the C-in-C rather than using anyone from the novel continuity.  Nor were there any other overt connections that I noticed.  While I, as a huge fan of the novel continuity, would have loved to have seen some connections drawn between those stories and the new status quo of the Picard series, I totally understand the choice not to tie this book to the past decade-plus of novel continuity.  (The only place this really pained me was in the scene of Picard’s farewell to Beverly Crusher after leaving the Enterprise.  This awkward goodbye depicts a Picard still unable or unwilling to admit his true feelings for her.  I have loved that Picard in the Trek novels has moved past this, and that he and Beverly have built a life and a family together.  I missed this here.  And in the Picard series!  I was extremely disappointed that Dr. Crusher didn’t even warrant a mention in the Picard series itself.)

One thing that caught my attention in the novel was the suggestion, made several times, that the Romulan supernova might not have been a naturally-occurring event.  That’s a notion I had ever since the supernova was introduced back in J.J. Abrams’ 2009 Star Trek film.  The ridiculous speed at which the supernova destroyed Romulus read false to me, and in an attempt to find an in-universe explanation for what could be suggested was lazy writing, I’d wondered if there might not be a story behind that supernova’s having been intentionally caused.  I’d LOVE for the next season of Picard, or future novels, to explore this idea!

Speaking of the 2009 film, I’d wondered whether the disappearance of Spock (into the alternate “Kelvin” timeline) would be mentioned.  I was surprised that, though Spock does appear in a small role in the novel, his disappearance following the destruction of Romulus never came up.

There are a few places where, despite all of Ms. McCormack’s efforts, I didn’t quite buy how the status quo of the Picard series came to be.  For example, I like that she attempted to provide an explanation as to why Picard wouldn’t have remained in command of the Enterprise, with his trusted allies like Geordi and Worf and Dr. Crusher right there by his side, when he began the Romulan rescue mission.  Still, it rings false to me that, after decades in command of the Enterprise, Starfleet would transfer him away at a snap.  But these are minor quibbles — overall, I was deeply impressed by the great pains that Ms. McCormack took to try to provide explanations and context for the backstory of the Picard series.

Both The Last Best Hope and Countdown were fun reads!  I was delighted by how they each told new stories that, nevertheless, felt like they fit smoothly into all of the pre-established Trek history, from TNG onward.  I wish the Picard show had been able to do that as effectively.