Skip to the content
HomeWritten PostJosh Reviews Living with Yourself 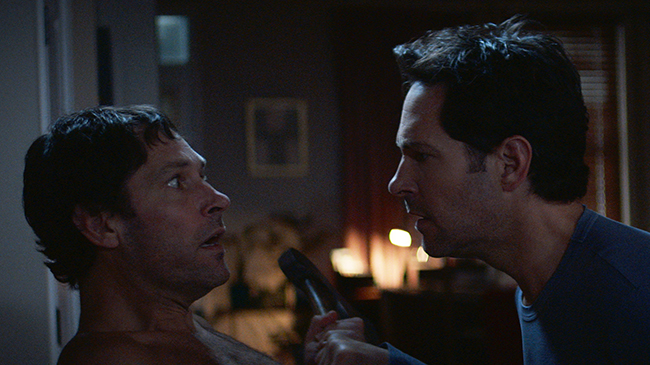 Josh Reviews Living with Yourself

In the Netflix mini-series Living with Yourself, Paul Rudd stars as Miles Elliot.  Miles has a lovely wife, a nice house, and a good job.  And yet, he is deeply unhappy.  When we meet Miles in the first episode, he seems to be locked in a cycle of misery and mediocrity.  Desperate for something to change, he takes a co-worker’s advice and visits a mysterious spa for a treatment.  During the treatment, Miles falls asleep; he awakens to find himself mostly buried, alone in the woods.  Distraught and confused, he eventually makes it back to his house, only to discover that he has been replaced by an identical clone of himself.  Except this clone is a far better version of himself than he ever was!

This is a nutty premise, but one of the best aspects of Living with Yourself is how wonderfully far the show runs with this set-up!  I love how deeply the show explores the reality of this crazy sci-fi notion.  I love how grounded every other aspect of the show is, with the exception of this crazy cloning premise!  (In that respect, the show reminds me, quite favorably, of Eternal Sunshine of the Spotless Mind.)

Paul Rudd is fantastic in the dual role of Miles and his clone.  Mr. Rudd is perfectly cast, and he’s every bit as great as I’d wanted him to be.  I love how perfectly Mr. Rudd is able to differentiate these two different versions of Miles.  There is never any question about who is who.  This is an acting triumph.  (The seamless special effects are spectacular and also really help sell the reality of the show.)

The series was created by Timothy Greenberg, who wrote all eight episodes.  All eight episodes were directed by the team of Jonathan Dayton & Valerie Faris, who directed Little Miss Sunshine and Battle of the Sexes.  These are names I’ll be paying close attention to, after having watched this series!

Living with Yourself is a very funny show, but this isn’t a silly spoof.  The show is based firmly in drama, and in exploring the emotional complexities of this situation and of the affected characters.  Mr. Rudd’s skills are perfectly suited to striking this delicate tone.  He is able to be absolutely hilarious one moment, without undercutting the drama and emotion of the next moment.

The eight episodes are beautifully structured.  I love how we’re continually shifting back-and-forth between the different perspectives of the two Miles (and then eventually, in one of my favorite episodes, into the perspective of Miles’ beleaguered wife Kate).  In less-capable hands, these perspective-shifts might have been confusing, but they’re beautifully well-executed on the show.  I was never confused about where we were in the timeline or who we were following.  On the contrary, the way these perspective-shifts allow us to inhabit and explore the different characters is at the heart of why the show works as well as it does.

As fantastic as Paul Rudd was, I also quickly grew to adore Aisling Bea as Miles’ wife Kate.  Ms. Bea has to play the “straight-woman”, for much of the show, to all of the clone-related shenanigans, but she does this so effortlessly and skillfully, bringing life to this character who, at first, is mostly on the periphery.  I love how funny Ms. Bea is, and also how beautifully rich she is able to make this character.

It’s great to see Arrested Development‘s Alia Shawkat as Miles’ unflappable half-sister Maia.  (I wish we’d seen more of her in the show!)  Jon Glasser (Councilman Jeremy Jamm from Parks and Recreation) is hilarious in a small role as Maia’s husband Henry.  Desmin Borges is very funny as Dan, Miles’ friend turned rival turned sort of friend again at work.  Rob Yang and James Seoul are a hoot as the bickering duo who work at the cloning facility/spa.

My only tiny teensy complaint about this season is that the finale felt to me like it left a lot of story still to tell.  We get an ending, but I didn’t feel things all tied up quite as neatly as in Russian Doll (another terrific eight-episode Netflix show with a sci-fi premise, which I’d recently watched).  I’d thought this would be a one-and-done mini-series, but perhaps the creative team is hoping to make a second season?  (A second season has not yet been announced, but click here to hear from the show’s creators as to how they left the door open to the possibility of another season.)

I throughly enjoyed Living with Yourself; I’m so glad to have caught up to it!  I highly recommend this very weird, very funny, very heartfelt show.