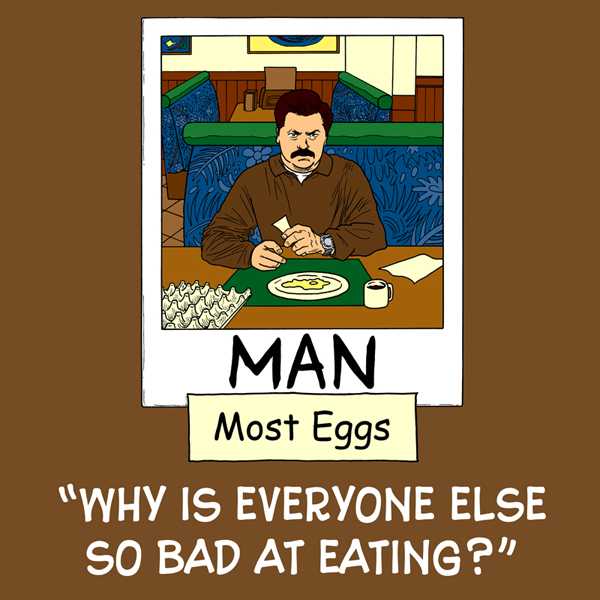 Last week Parks and Recreation signed off after seven pretty fantastic seasons.  I can’t believe how sad I am that the show is over.  It has hugely grown on me over the years, to the point that it is now one of my very favorite TV comedies of all time.

I barely made it through Parks and Rec’s first six-episode season.  It launched back when the American version of The Office was in its prime, so I was excited to see what had originally begun as an Office spin-off.  What aired was not a direct spin-off of The Office (Rashida Jones transitioned from The Office to Parks and Rec, but she was playing a new character), though both shows felt cut from the same cloth.  Both used the fake-documentary style, and both focused on a clueless main character who was a source of ridicule for his/her co-workers and the audience.  I was not taken with the new show.  The episodes were more painful to watch than they were funny.

But then, interestingly, Parks and Rec made exactly the same type of course-correction that The Office did after its first sub-par six-episode season.  The tone of the comedy shifted from laughter centered around awkward/painful moments to more heartfelt humor.  More importantly, they shifted the character of Amy Poehler’s Leslie Knope from someone who was pathetic and socially oblivious and pretty much a failure to someone who was actually damn good at her job.  She was still something of a weirdo and a social outcast, but suddenly we liked Leslie because of her incredible good nature and her drive to do good.  Leslie’s force of personality began to cause her co-workers to look up to her, rather than ridiculing her, and just like that the seeds for the show’s magic were sown.  In the early first-season episodes we’d hear Leslie describe her aspirations of being a great leader who would stand with the great women of the planet, and those dreams were pathetic because of how inconsequential Leslie actually was.  But gradually those dreams became to seem not nearly so far-fetched, and we the audience saw Leslie as easily standing among those great women she idolized, even though she just worked in the parks department of a small Indiana town.

The season two premiere was an immediate and powerful announcement of the show that Parks and Rec could be.  Leslie performs a fake marriage of two penguins at the Pawnee Zoo as a stunt to promote the zoo, only to cause a huge uproar because it turns out both the penguins were male, and thus Leslie had performed a gay marriage.  It’s such a great hook for the episode, and immediately the shift in the show’s tone was clear.  (This was also the beginning of the show’s expansion of the crazy citizens of Pawnee.  One of the great joys of the show has been the way the series has populated Pawnee with a hugely bizarre and lovable group of kooks and weirdos.  Many writers have taken to comparing the rich development of Pawnee to that of The Simpsons’ Springfield, and I heartily agree.  Not only did the writers create some marvelous characters, but they seemed to know just how to handle these wonderful recurring characters, bringing them back enough to be memorable but without ever wearing out their welcome.  Parks and Rec’s ensemble of supporting characters is insanely rich and deep.  Jean-Ralphio & Mona-Lisa Saperstein, and their father.  All of the Tammies.  Perd Hapley.  Joan Callamezzo.  Crazy Ira and the Douche.  Brandy XXX.  Jamm and all the other city councilmen.  Ethel Beavers.  The surly Dr. Harris (Ann’s boss at the hospital).  All the people with the last name Lerpiss.)  I really liked that episode, far more than anything we had seen in the first season.  Things continued quickly uphill from there.  All of the characters underwent a similar shift in tone to what I have been describing happened to Leslie.  Andy went from an insensitive jerk, a pox on the life of poor (beautiful) Ann, to a goofy, lovable, heart-of-gold lunk.  Ron Swanson went from being almost the villain of the show, as Leslie’s main obstacle, to one of the most remarkable TV characters ever created, a much-loved source of wisdom and incredibly quotable statements.  And on and on.

Season three of the show — with its harvest festival story-line — was the high-point of the show for me.  That season was an incredible comedy roller coaster, with one spectacular episode after another.  It stands as one of the greatest TV seasons of any show ever.  Hitfix’s Alan Sepinwall, who has always showered a lot of love on Parks and Rec and who went above and beyond last week in the days leading up to the show’s finale with one amazing feature on the history of the show after another after another, has asserted that the show’s amazing run of phenomenal episodes (one after another with nary a clunker in sight) lasted 42 episodes, from “Leslie’s House” in season two to “Dave’s Return” in season four.  I think he is right on the money.  That is an incredible run for a weekly network TV series to go without a miss.  Parks and Rec was on fire.

That might have been the high point of the show, but Parks and Rec never slumped in its later years the way The Office did.  This seventh and final season, in particular, has been a marvelous victory lap.  OK, the time jump thing has been a little over-used in shows in the decade since Battlestar Galactica used the device so shockingly and so magnificently.  But all of the little 2017 jokes woven throughout the season have been a hoot, and the shake-up to the characters’ status quo gave the start of the season a nice new dynamic energy.  (Though boy it was painful to watch Ron and Leslie argue.  I am glad that got resolved very quickly in the season.)  Once things settled down, I was impressed by the confident way in which show-runner Mike Schur and his talented team of writers managed to wrap up all of the characters arcs.  Everyone got some time in the spotlight, and everyone got a nice, satisfying resolution to their journey.  I was particularly pleased by how deeply the writers dipped into the show’s huge bench of wonderful supporting characters, bringing so many of them back to each get a great final scene or moment somewhere in this last season. (All the Pawneeans who I mentioned a few paragraphs back popped up, along with deeper cuts like casino-owner Ken Hotate, Typhoon, those accountants who Ben constantly disappoints, Eagleton Ron, Bobby Newport, and so many others.)  This final season was a phenomenal salute to the gloriously rich universe of Pawnee that this show had created.  And the episodes were consistently as funny as the show at its best.

As for the actual finale itself, “One Last Ride,” I was deeply satisfied.  The show borrowed the device of the final minutes of the Six Feet Under finale (which I must admit I have never seen, but I’m aware of it from pop-culture osmosis) and expanded it throughout the entire length of the episode.  Any points deducted for lack of originality are gladly awarded back for the satisfying, emotional reward of this journey backwards and forwards through time as we get to see how all of the characters’ lives play out in the years after their time together in the Pawnee parks department.  I have written a lot on this blog about series finales (a few years ago I ranked my ten favorite series finales), and I feel strongly that one of the most important aspects that determines the success or failure of a series finale is the degree to which we, the audience, are satisfied with the endings given to all of the characters who we have grown to love.  In this way, the Parks and Rec finale succeeded admirably.  I love where all of these characters ended up.  I was glad to see that they all found happiness in their personal and professional lives.  (Though on that note, the only off-note in the finale for me was the absence of Ron’s wife Diane, played by Lucy Lawless.  I guess she wasn’t available?  That was a bummer of an absence.)

This finale wasn’t as funny as most Parks and Rec episodes.  Instead, the creators clearly decided to go for a more emotional, heartfelt tone.  It worked for me.  There were several wonderfully emotional scenes in the show.  My favorite was Ron’s grin of pure joy when we see him canoeing off alone in the park that he now oversees.  Magnificent.

The episode was stuffed full of great little moments and nods to the history of the show.  Some of my favorite bits included:

Of course, the return of Chris and Ann.  I wish they’d been in more of the finale (it would’ve been nice, for example, to see them sitting watching Leslie’s valedictory speech at the end), but I was happy with what we got.

That Garry Gergich’s beautiful blonde wife and children don’t appear to have aged, even when he had reached ninety.

The marriage of Craig and Typhoon.  Phenomenal.  (Ron as the delighted best man for Typhoon was a brilliant touch.)

I’d been waiting for Shauna Malwae-Tweep to return all season long, so I was thrilled we got to finally see her again in the finale.  (Giving Leslie one final chance to pitch her some headline ideas.)

That one serious moment between Jean-Ralphio and Leslie.  Such a great out-of-left-field little bit of business!!  Loved it.

The mystery of Leslie’s final job was wonderful.  Was or is she the President?  Vice-President? Or perhaps is it Ben — who so selflessly agreed to let Leslie run for governor in his place earlier in the episode — who had reached that high level of political office, one that would carry with it a secret service detail?  I love that the show left this to us as a small mystery.

Considering how often this show was on the verge of cancellation (show-runner Mike Schur famously wrote quite a number of previous episodes to work as series finales if the network’s axe fell), it is a miracle that we got to enjoy seven seasons of Parks and Rec.  And considering how much I enjoyed so many of the previous great episodes that had been written to be series finales (from the great “Harvest Festival” onward), it’s amazing that this final, for-real-this-time series finale was so satisfying.  I love this show, and I will miss it dearly.  I look forward to re-watching it all over again from the beginning some-time soon.