Skip to the content
HomeWritten Post“Of my friend, I can only say this…”

After reading of Leonard Nimoy’s passing, I knew I needed to watch some Star Trek.  Star Trek II was too painful to consider.  I thought about watching Trek III or Trek IV, both of which were so marvelously directed by Mr. Nimoy.  I thought about Trek VI, which is probably my favorite of all the Trek films, and which features one of Mr. Nimoy’s very best on-screen performances.  (His heartbroken delivery of the line “She does not know” absolutely kills me every time.)  But I decided what I wanted was some classic Trek, so I could see Mr. Nimoy — and the iconic character with whom he has been so indelibly associated for almost 50 years, and now will be forevermore — in his prime.

So I decided to watch “Amok Time,” from the second season of the Original Series. 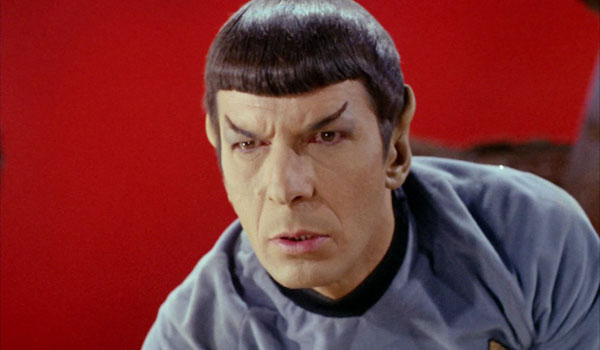 “Amok Time” is one of the most famous Trek episodes.  I’ve seen it countless times, but I hadn’t watched it for several years.  It’s astonishing how great this half-century-old TV show looks and sounds on blu-ray, and re-watching the episode I was once again impressed by the show’s boundless creativity, and the high-quality of the production across every area.  This happens to be a very sharply-written episode, filled with some of the very best and most well-known Spock lines.  (Spock’s final statement to the Vulcan Stonn is particularly wonderful: “After a time, you may find that having is not so pleasing a thing after all as wanting.  It is not logical, but it is often true.”  There is great wisdom there.)  The amount of world-building in this episode is astounding, as we make our only visit to Vulcan in the series’ run and, in so doing, learn so much about Spock and his people.  It’s all super-cool, everything from our glimpse of the elderly stateswoman T’Pau to those awesome Vulcan weapons (which Trek fans well-know are called the Ahn-woon & the Lirpa) to all the great details in (and fun, made-up Vulcan words for) all the aspects of the Vulcans’ complex mating rituals.  (Again, all true Trek fans know all about Pon Far and the Koon-ut-kal-if-fee and Plak Tow.)  This episode features one of the very best Trek scores of them all, with the incredible theme music for the Vulcan combat.  (I love how we can hear this music playing, very soft and slowly, when Spock first speaks to Kirk on the Enterprise of Pon Farr.)  The episode feels a little of-the-past in the unsettling-to-a-modern-viewer way that the Vulcan combat ritual involves the woman’s being given to the victor.  On the other hand, one can see and respect the groundbreaking-for-its-time way in which this episode presented Vulcan as a matriarchal society.  The elderly T’Pau is honored and respected by everyone (from all the Vulcans, to Kirk, and even Kirk’s superiors in Starfleet Command as revealed in a nice bit at the end of the episode), and even T’pring, though she is certainly cold-blooded in the way she plays with Spock and Kirk’s lives, is revealed as being completely in control of the entire situation.  The whole episode is about her choosing to defy tradition and marry the man she loves (even though we might not like the way she goes about it).  It’s hard not to respect that for a sixties television show.

But, truly, this episode — and, stepping back to consider the broader picture, so much of the enduring success of Star Trek — comes down to Leonard Nimoy.  Staying with “Amok Time” for a moment, the episode is a magnificent showcase for the way Mr. Nimoy brought this character to life, playing him with so many layers of complexity.  The magic of the Spock character (something not fully understood by many of the other actors who have played Vulcans over the years) is that Spock was not a creature without emotions, but one who continually struggled to control his emotions.  This episode is one of the best showcases for that struggle, as the Pon Farr rips away at Spock’s control.  Mr. Nimoy is magical in the way he shows us, in every moment of the episode, Spock’s increasingly desperate efforts at controlling his biological impulses.  In this episode we get to see Spock angry and out-of-control, but we also get to see his honor and his sweetness (in the way he gently asks Nurse Chapel for some plomeek soup, in the way he asks his friends Kirk and McCoy to accompany him to the ritual even though off-worlders are not wanted, and in the way he begs T’Pau to exclude Kirk from the trial by combat because he knows what Kirk and the audience do not, that is to-the-death).  The moment in which Spock, convinced that he has murdered his captain and is friend, sees Kirk alive and well up on the Enterprise, and exclaims “Jim!” with a huge grin on his face, is one of the most profound, heart-warming moments of any incarnation of Star Trek over its nearly 50-year history.

Quite a few wonderful articles about Leonard Nimoy from the past 24 hours have made the point that, more than any other actor or creator, or any other aspect of the show, it was Leonard Nimoy as Spock who was central to Star Trek’s enduring success.  I agree.  It’s not a coincidence that Spock was the only character from Gene Roddenberry’s original failed Star Trek pilot to be carried over into the second, successful pilot that launched the Star Trek we all now know and love; that Spock was one of the few original characters brought back to reprise his role on Star Trek: The Next Generation; and that Leonard Nimoy as Spock was the only actor from the original ensemble brought back to be involved with J.J. Abrams’ reboot.

Much has been written over the decades of Star Trek’s history about the way that Spock as an outsider character touched the hearts and minds of fans world-wide, connecting with that part of all of us that feels like we don’t belong, like we are different from everyone around us.  And much has been written about Leonard Nimoy’s dignity, and the humanity that he brought to this character, the one alien on the original Enterprise bridge.  I’m not sure I can say any of this any better than all those other writers who have sought to find the reason for Star Trek’s incredible, enduring success.  I can only assert that Leonard Nimoy was certainly one of, if not THE, key reasons for the magic of Star Trek.  Surely, Spock is one of the most indelible, iconic, and beloved fictional characters of the past century.  And more than any other actor from the Original Series — all of whom also embodied iconic, beloved characters — I believe that Leonard Nimoy himself was most inextricably combined with his character.  J.J. Abrams’ movie proved that other actors could portray these iconic characters (something that fans of Trek fan-made film series like Star Trek: Phase II already knew).  But while all of the new actors did a great job, Spock was the only character where I felt something was missing.  This is not in any way a knock against Zachary Quinto, who is a marvelous actor and gave his all to the performance.  His Spock is great, but he is not exactly MY Spock.  In some special, magical way, the look, the voice, and the soul of Leonard Nimoy were critical elements in the creation of Spock, and I don’t think his performance can ever be duplicated.

For decades I have also been a fan of Mr. Nimoy’s work as a director and a writer.  And he has certainly been involved in many other projects that I have enjoyed, from In Search Of… to Three Men and a Baby.  But I have loved Star Trek dearly for as long as I can remember, since I was a little kid, and just as it was for so many millions of other fans, loving Star Trek meant loving Mr. Spock.

I can do nothing more now but thank Mr. Nimoy for all of the joy that his work has given to me, and to so many others across the world.  My heart is with his family and his friends.  Though Mr. Nimoy himself is gone, his work will endure.  It will certainly be a part of my life for as long as I live.

Here are some more great articles about Leonard Nimoy:

Mr. Nimoy’s New York Times obituary. (I love that the large photo of Spock at the top of this article is from “Amok Time.”)

From Davin Faraci at badassdigest.com.

A collection of tweets following the news of Mr. Nimoy’s passing.  More remembrances are here.  How awesome is what President Obama had to say??