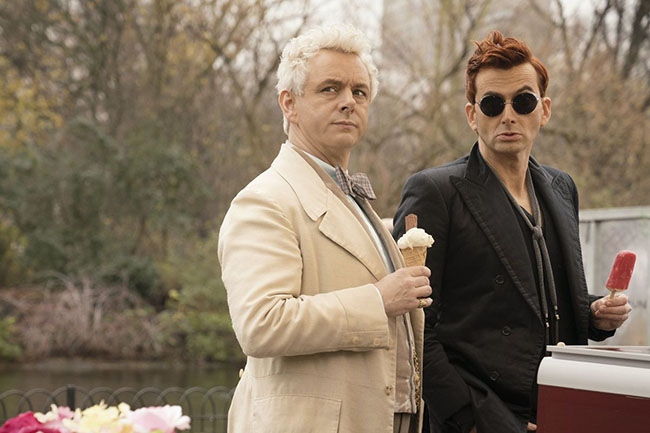 This past summer, Amazon released a six-episode adaptation of Good Omens: The Nice and Accurate Prophecies of Agnes Nutter, Witch, the wonderful novel by Terry Pratchett and Neil Gaiman.  I love the novel.  It’s a deliriously funny, clever romp that reminds me very much of the work of Douglas Adams.  The mini-series, like the novel, charts the unlikely friendship between an angel, Aziraphale, and a demon, Crowley.  When the Antichrist is born on Earth, and the sides of Heaven and Hell ready for war, Aziraphale and Crowley, having grown to quite like life on Earth, realize they have no choice but to work together to try to prevent the end of the world.

In the mini-series adaptation, Michael Sheen plays Aziraphale and David Tennant plays Crowley.  This is genius casting for both characters, and what I liked best about this mini-series was seeing these two characters brought to life so well, and watching them bounce off one another.  Both Mr. Sheen and Mr. Tennant are absolutely perfect, and they both have tremendous comedic timing which is put to good use here.  I loved their scenes together.  I was particularly taken by episode three, “Hard Times,” one of the few times in which the show diverged from the novel, showing us the history of Crowley & Aziraphale’s strange friendship over the centuries, from Noah’s ark through the time of Jesus to the modern day.

This mini-series is one of those curious projects which is incredibly faithful to the source material and yet still, somehow, winds up missing the certain spark that made the source material so special.  The mini-series lacks the comedic pulse of the novel, and its light tone.  Most importantly, the novel is so, so funny, and unfortunately the mini-series isn’t.  It’s a shame, because I was generally impressed with how carefully they adapted the story.  The six-episode length gave the show plenty of time to fit in almost all of the novel’s many twists and turns.  They even included the narration, using the great Frances McDormand to play the narrating voice of God.  This inclusion of the narration is a great example of where the mini-series wound up going just a tad bit astray.  Including the narration — unusual for a TV show to have — allows the mini-series to include many of the book’s best jokes.  But on the other hand, I found the narration slowed down the show and prevented me as an audience member for connecting as deeply with the characters as I might have expected.  The narration kept me at a distance.  And as such, I found the jokes in the narration didn’t land nearly as well as they did in the novel.

The show’s supporting cast was mostly strong, though not quite as spot-on as the two leads.  Let’s start with Michael McKean, who was gloriously perfect as Witchfinder Sergeant Shadwell.  I loved every moment he was on screen.  Mr. McKean perfectly embodied Sergeant Shadwell’s shaggy, paranoid, set-in-his-ways stubbornness.  I also quite enjoyed Jon Hamm (Mad Men) as the Archangel Gabriel.  This character was mostly created for the show, but he fit in very well with the larger story, and Mr. Hamm’s chiseled good looks were perfectly utilized as a counterpoint for the actions of this rather nasty angel.  Mr. Hamm is a very funny comedic actor (a skill he didn’t get to show off too often in his mostly very serious role on Mad Men), so it’s fun to see him in this type of project.  Miranda Richardson (Empire of the Sun, The Apostle, Sleepy Hollow, and she was Reeta Skeeter in the Harry Potter films) was a lot of fun as the sweet medium and, er, part-time courtesan Madame Tracy.

Jack Whitehall was solid as Newton Pulsifer, the sheepish young man who gets thrust into this end-of-the-world situation.  Mr. Whitehall nailed the nebbishy, bumbling aspect of Newton, though he wasn’t quite as endearing as I’d expected.  Adria Arjona played the descendant-of-a-witch Anathema Device.  Ms. Arjona played Anathema quite differently than I’d expected from how I’d imagined Anathema when reading the book — she came on stronger, and overall seemed far more put-together than I’d pictured Anathema as being.  That took me some getting used to, and in the end I was never quite satisfied with her portrayal of this character.  I think we the audience needed to like and invest more heavily in the puppy-dog romance between Anathema and Newton than I wound up doing when watching the mini-series.

It was fun to see Nick Offerman (Parks and Recreation) as Thaddeus Dowling, the US Ambassador who pops in and out of the story, and I liked hearing Brian Cox as the voice of Death.

The series’ production values are decent.  The sets and costumes and props all looked terrific.  (I particularly loved the look of both Aziraphale and Crowley.)  The CGI effects, when they came, were a little more dodgy.

The series’ major divergence from the novel was the ending.  Happily, I didn’t mind these changes at all.  I liked that the gang’s final confrontation with Adam’s demonic father was larger in scale and more exciting than what we got in the book.  I also liked the surprise of the final switcheroo that Crowley and Aziraphale played on their comrades in Heaven in Hell.

If you’re a fan of the novel, Good Omens is worth checking out.  It’s an enjoyable six episodes.  But unfortunately the mini-series doesn’t come close to capturing the magic of the novel.  My recommendation: skip the show, read the book.