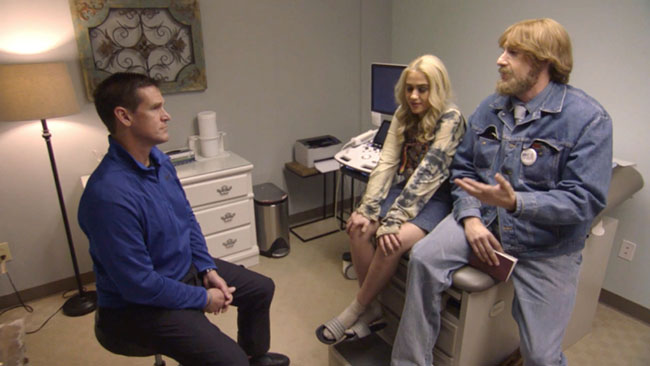 I was surprised and delighted when news broke, only a few weeks ago, that Sacha Baron Cohen had secretly filmed a Borat sequel!  In an age of internet spoilers and movie studios who spend months to years hyping their upcoming films, that any movie could be created in secret — let alone a sequel to a hit film like the original Borat — is very exciting.  And just like that, the Borat sequel (full title: Borat Subsequent Moviefilm: Delivery of Prodigious Bribe to American Regime for Make Benefit Once Glorious Nation of Kazakhstan) is available on Amazon!

The Borat Subsequent Moviefilm is terrific.  It’s hilarious and terrifying in equal measure, which is precisely what was intended.  It doesn’t have the shocking impact of that first Borat film — how could it?  Once we’ve seen that transgressive character and how Mr. Cohen used him to expose bigotry and close-mindedness, it’s hard to duplicate the power that first viewing had.  Also, while laughing to the Borat sequel at home is fun, watching the film any home can’t compare to the electric experience of watching that first film in a theater, and hearing and feeling everyone’s shocked reactions when, say, Borat and his “producer” Azamat (Ken Davitian) wrestled nude in public.

I’d never expected a Borat sequel would be possible, precisely because of the impact that first film made.  Borat was now a widely-known character, so how could Mr. Cohen use him any more?  The new film addresses this, with several early sequences showing people recognizing Mr. Cohen as Borat.  Somehow, though, Mr. Cohen was able to find people who were, apparently, unfamiliar with the character.  Additionally, he and his team utilized a strategy of often having Borat in other disguises.  There’s a certain meta humor to be found in Mr. Cohen playing Borat playing another character.  And there’s no question that was an effective tactic in being able to get people to talk to Mr. Cohen in an unsuspecting way.  The downside is that it makes Borat Subsequent Moviefilm feel a little more episodic, a little more like an assembly of different sketches, than that first film did.  But careful editing and the clever assembly of scenes that stitch together the large prank sequences makes it all work in a pleasingly cohesive way.  (Director Jason Woliner has done a great job, stepping into the shoes of original Borat director Larry Charles.)

Mr. Cohen’s pranks on famous public figures such as Mike Pence and Rudy Giuliani have made headlines, and there’s no question that those sequences in the film are showstoppers.  (Mr. Cohen crashed Mr. Pence’s speech at CPAC in February 2020, dressed up as Trump with a blonde woman thrown over his shoulder; and I think the whole world knows now that he caught Mr. Guliani with his hand literally down his pants.)  Interestingly, though, I found the times the film depicted those men in their own public words to be even more damning than their reactions to Mr. Cohen’s pranks!  Before Mr. Cohen interrupts his speech, Mike Pence is seen blithely dismissing the threat of COVID.  He says in his speech: “As of today, we have fifteen cases of coronavirus that have been detected in the United States with only one new case detected in the last two weeks… While the risks to the American public remains low, as the president said yesterday, we’re ready.  We’re ready for anything.”  Ha.

And while there’s no question that the film takes pleasure in taking down famous men, the true beating heart of the film — and it’s terrifying reason for being — is the depiction of the prejudices of every-day Americans.  Mr. Cohen’s genius in getting people to reveal their prejudices on camera is astounding.  There’s a staggering sequence in the film in which Mr. Cohen, in disguise, visits a “March for our Rights” held in Washington this past June.  Just seeing footage of this group of gun-toting, confederate flag-waving people gathered to protest such simple COVID safety measures as mask-wearing is shocking.  But it’s absolutely terrifying to see Mr. Cohen up on stage, leading many of the attendees in a song with verses like “I ain’t lying, ain’t no jokes, corona is a liberal hoax” and “Obama, what we gonna do? Inject him with the Wuhan flu” and that we should “chop [journalists] up like the Saudis do” and “gas them like the Germans do.”  Even more staggering to me was the scene in which Mr. Cohen, again in disguise, gets a woman at a bakery to write “Jews will not replace us” in icing on a cake.  This normal-looking woman doesn’t seem to bat an eye at this evil request.  It’s astounding.

The key genius idea in Borat Subsequent Moviefilm is to pair Mr. Cohen up with Maria Bakalova as Borat’s fifteen-year-old daughter Tutar.  In the film, a disgraced Borat attempts to gift his young daughter to “Vice pussy-grabber” Mike Pence.  (When that fails, he moves on to “Ronald McDonald Trump’s” good friend Rudy Giuliani.)  Ms. Bakalova is, first of all, a flat-out brilliant comedic performer, and she demonstrates throughout the film that she is just as staggeringly fearless as Sacha Baron Cohen himself.  This is an amazing performance, that I am certain will make a name for Ms. Bakalova.  She’s incredible.

Tutar/Ms. Bakalova’s presence allows Borat Subsequent Moviefilm to sharply target not just racism and Anti-Semitism, but also sexism and misogyny.  This distinguishes the film from the original Borat, and makes it even more importantly of-the-moment than it would have been otherwise.  There is scene after scene in the film that exposes shocking and disgusting male behavior.  Mr. Giuliani’s reaching down his pants is astonishing (one fears to imagine what might have happened had Mr. Cohen burst into the room one second later), but even more so is seeing, say, a shopkeeper willing to sell Mr. Cohen (as Borat) a cage despite Mr. Cohen’s saying he intends to keep his daughter in it; or the father at a debutante ball who, when asked by Mr. Cohen (as Borat) how much his daughter Tutar (who, remember, is supposed to be fifteen years old in the film) would get as a prostitute, doesn’t hesitate to estimate $500.  (And I haven’t even mentioned what goes down in the incredible sequence in which Borat and Tutar visit an anti-abortion clinic, in the scene pictured at the top of this blog.)

So, yes, there is much in Borat Subsequent Moviefilm that is ugly.  One hopes that the people in our own Once Glorious Nation might learn, through projects like this that expose their hypocrisy and blind hatred, to someday move beyond such ugliness.