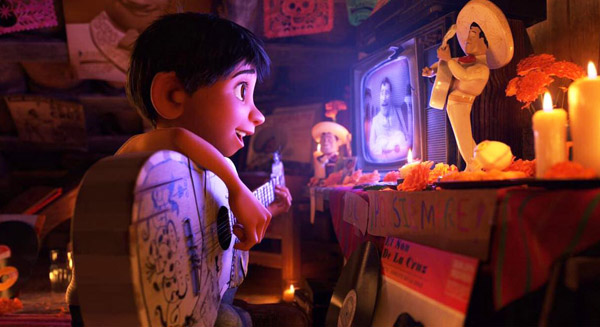 In Pixar’s latest masterpiece, Coco, we meet Miguel, a young boy growing up in a small Mexican town. His family are all shoemakers, and the expectation is that Miguel will follow in their footsteps (pun sort-of intended) and take up the family profession. But Miguel secretly longs to be a musician, like his idol Ernesto de la Cruz. This is Miguel’s big secret from his family, because many years ago Miguel’s great great grandmother was abandoned by her musician husband, and so ever since the family has refused to allow any music into their homes or their lives. When, on Día de Muertos (the Day of the Dead), Miguel sneaks out and steals a guitar in an attempt to enter a local music competition, he becomes cursed and trapped with his ancestors in the Land of the Dead.

That simplified plot description does not do justice to this subtle, sophisticated story.  Coco is a magnificent film, deeply moving and visually spectacular in the way that Pixar seems to make look so effortless. The film is filled with richly drawn characters who you will quickly grow to love and care deeply about. There were several moments in the film’s third act that had me in tears.  I am left to once again marvel at the rich world that the artists at Pixar are able to create with each of their films.

What at first seems like a fairly boiler-plate story about a child longing to spread his wings and escape the confines put upon him by his family quickly blossoms into a far more complex story.  Until we get to the end, the film avoids finding easy villains.  Both sides in Miguel’s argument with his family have merit.  His desire to express himself artistically is understandable, and as the film unfolds we also grow to sympathize with and understand both why his family has turned their backs on music, and also on the importance with which they hold honoring their elders and preserving their family traditions.

For an all-ages film, Coco does not shy away from addressing death, a topic one seldom sees incorporated into a movie like this!  And yet, death is a central through-line of the film.  Coco takes place on the Day of the Dead, and the deaths of several different characters in the film provide key plot points and emotional moments.  While the film does envision a life beyond death (more on that in a moment), the idea that all who live shall die is at the core of the film’s story.  This is a brave choice for a big-budget Disney/Pixar movie!  I am surprised and impressed.

Coco creates an entire universe and mythology out of the idea of death and the afterlife with as much care, creativity, and attention to detail that we saw in Inside Out‘s creation of the world inside a young girl’s head.  The filmmakers expand upon the core idea of a Land of the Dead to delve deep into considering how this could actually work and what existence would be like there!  The film is stuffed full of wonderfully clever, inventive notions, from the train-station-like look of the gateway between the Land of the Dead and the living world (I love the facial-scanners that match a skeleton’s face to a photo of them left out by a loved one in the living world) to the way the film develops rules for what the skeletons in the Land of the Dead can or can’t do as well as what happens beyond one’s time there.

While much of this depiction of the afterlife is the wholly original (and staggeringly impressive) creation of the Pixar team, I was also impressed by how genuinely the filmmakers seemed to want to create a positive, faithful representation of Mexican culture and beliefs.  The film incorporates numerous aspects of Mexican culture and society into its story, and feels like a far more successful attempt to represent a specific non-American culture than some previous Disney animated attempts from days gone by that I can think of.  (To read a lot more about the filmmakers’ approach to cultural accuracy, and how the film aims to be a “love letter to Mexican culture,” click here.)

The film’s voice cast is spectacular.  Young Anthony Gonzalez plays Miguel, and it is a fantastic, star-making performance, full of richness and depth of emotion.  I was bowled over.  Gael García Bernal plays Héctor, a vagabond who befriends Miguel in the Land of the Dead and who winds up inextricably linked with Miguel’s story.  Héctor is an extraordinary character, one of the most complex I can ever recall seeing in an animated film, and Mr. Bernal’s performance is magnificent.  The film makes us wait a long time before we (and Miguel) meet Ernesto de la Cruz, but when he arrives, Benjamin Bratt is terrific in the role, giving de la Cruz all the bombast we might have hoped for.  I also have to highlight the great Edward James Olmos’ work as Chicharrón, a friend of Hector’s who is on the verge of being forgotten.

I went into Coco not knowing very much about the film’s story, and I encourage you to do the same.  The story goes to some unexpected places, and I was absolutely riveted by the ride.  More than that, I was deeply moved by the beauty and tragedy of the tale.  I highly recommend Coco to film fans of all ages.

One final comment: like many, I was not thrilled by the lengthy (21-minute) Olaf’s Frozen Adventure cartoon that played before the film.  I love the tradition of animated shorts playing before a movie, but at 21 minutes this is far longer than a “short” — this is a full episode of a TV show.  It’s too long to be something we’re all forced to watch, without being given any choice, before a movie that has nothing to do with it.  While the cartoon isn’t terrible — it’s certainly fun to see all of the Frozen characters again, and there are a number of new songs — it’s not great either.  This was originally made for TV, and it shows.  The production values are not great (perhaps it was just my theater, but I found the sound quality flat when compared to Coco); even the aspect-ratio advertises this as something that wasn’t meant to be shown on the big screen.  But most importantly, Olaf’s Frozen Adventure is a jarringly different tone than Coco, and pairing the two does a disservice to them both.  I’m pleased at the news that this short is now being dropped from Coco screenings (and I don’t buy that this was Disney’s plan all along).