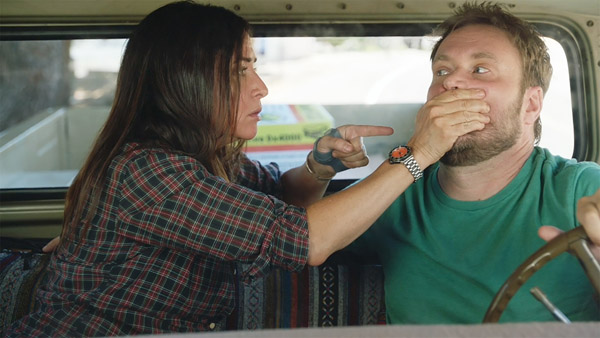 I loved the first season of Pamela Adlon’s show Better Things, and the recently-concluded second season was every bit as fantastic.  I feel like this show has been flying under the radar for many people, and that’s a shame.  It’s one of the best currently-running TV shows out there.

As I discussed in my review of season one, the show has a remarkably playful approach to narrative.  Better Things rejects all the usual ways that you would expect stories to play out on a TV show, both within a single episode and over the course of the season.  Some episodes explore a single story over the course of a half-hour episode, while other episodes are composed of a series of vignettes (that might be connected thematically or emotionally, but whose stories have little to do with one another).  Some episodes are plot-heavy, while others feel more like a “slice of life” exploration without much significant plot.  Several episodes early-on this season focus on Sam’s beginning a new romantic relationship.  I expected this to be a story that would run through the entire season, but after a few episodes that focused on this new man in Sam’s life, this story was completely pushed aside, with most of the major subsequent developments in the relationship happening off-screen.  It’s a fascinating approach, one that in less-skilled hands might have been frustrating.  But part of the greatness of Better Things is the way it explores aspects of people’s lives that TV shows usually skip over or ignore.  (I will never forget the extended sequence in season one of Sam silently walking around her house, starting up at her smoke alarms trying to determine which one is beeping because its battery needs to be changed.  Who hasn’t done that??  And yet, that’s not something I have ever before seen on a TV show!)

I love that Better Things features so many fascinating, strong but flawed female characters.  I love that the show is more interested in getting inside what makes each of them tick than it is in following usual TV-show story-arcs.  Each of the main women in this show got moments to shine this season.

I loved the glimpses that season one gave us of Sam’s wonderful support system of friends, and I loved getting to see more of this fascinating gang in season two.  I was particularly happy that Diedrich Bader’s Rich got more of a spotlight this year — I love seeing his close friendship with Sam, and how the two pull absolutely no punches with one another.  I also loved seeing more of Macy (Lucy Davis) and Sam’s friend and manager Tress (Rebecca Metz) — I’d love to see more of these characters in season two!

But boy, every moment of this show was an incredible spotlight for the talents of Pamela Adlon, who not only stars in the show, but who wrote or co-wrote seven of the ten season two episodes AND directed ALL TEN season two episodes.  How’s that for a hat trick?  Every second of this show feels like an intensely personal act of self-expression for Ms. Adlon.  This is an extraordinary achievement.  I am truly in awe.

I also have to mention disgraced comedian Louis C.K., who co-created this show with Ms. Adlon, directed the pilot, and wrote or co-wrote every single season two episode along with Ms. Adlon.  I am still processing my shock and disappointment at the revelations that Mr. C.K., a comedian and artist whose work I have deeply loved for years, is such a reprehensible scumbag.  Perhaps there may come a time in which I will feel ready to revisit and enjoy his comedy and/or his TV work, but for now it feels like a lot of great work has become toxic to me.  (The five seasons of Louie will always be groundbreaking television.  And yet, right now, I can’t imagine wanting to ever re-watch any of it.)  But I would not be being honest if I reviewed and praised Better Things without also giving credit to Louis C.K. for his involvement with this show.  I hope that Better Things will continue without Mr. C.K.’s involvement, and it will be interesting to see how the show does/doesn’t change without his artistic contributions.  But, for now, I must say that Mr. C.K.’s work on this season was a key part of this show; I was impressed by the way he and Ms. Adlon were able to blend Mr. C.K.’s humor and his blunt, don’t-look-away-from-the-pain-or-awkwardness style of storytelling with Ms. Adlon’s own style and life experiences and point of view, to create this amazing show.

* The “No, Jeff!  No!” moment captured in the image at the top of this review, from “Blackout,” was truly one of the funniest things I have seen on TV this year.  I am laughing just thinking about it.

* After the fascinating, much-discussed moment at the end of season one which shed a new light on middle-child Frankie’s gender identity, I was interested to see that this wound up not playing much if any of a factor here in season two.  On the one hand, I was looking forward to seeing this explored further, and was disappointed that didn’t happen.  On the other hand, I once again respect the show’s willingness to buck usual TV storytelling trends by choosing to not make this a Big Deal.  (I was surprised to see Frankie in a dress when we see her attend a Bar Mitzvah in “Arnold Hall,” which at first seemed like a step away from what had seemed like an interesting development in season one, but upon further contemplation I found I respected the show’s honesty in depicting a young person who, in many respects, might identify more as a boy but who also is happy to wear a dress from time to time.)

* I loved Kevin Pollak’s too-brief appearances as Sam’s brother Marion.  (And I LOVE that while all the females in Sam’s family have male names — Sam, Phil, Max, Frankie, Duke — her brother has what is generally considered a girl’s name, Marion!)  (The man with whom Sam begins a romantic relationship in the first half of this season also has a generally-female name: Robin!)

I am pretty evangelical about Better Things.  If you haven’t yet tried this show, go back to season one and dive in.  I was hooked after only a few episodes (episode 3, “Brown,” was the one that cemented my love for the show), and I suspect you will be too.