Skip to the content
HomeWritten PostStar Trek: The Original Series Gets the Series Finale it Always Deserved in “To Boldly Go” Part 2! 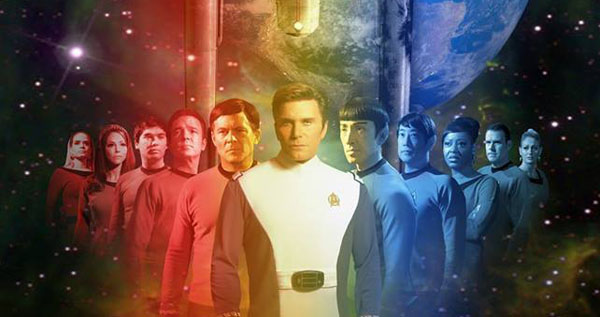 Star Trek: The Original Series Gets the Series Finale it Always Deserved in “To Boldly Go” Part 2!

Star Trek: Continues is a fan-made enterprise (see what I did there?) begun five years ago in an attempt to create the never-made fourth season of the Original Series.  In the past five years, Vic Mignogna and his fantastic team of collaborators have created eleven full-length episodes of classic Star Trek.  These eleven episodes have been a remarkable achievement: staggeringly professionally-made episodes that look and feel exactly, and I mean exactly, like classic episodes of the Original Series. In many cases, they have looked even BETTER!  Not every episode was a home run, and there were a few spots where the creators’ fannish enthusiasm outpaced their abilities.  But the craftsmanship and skill on display in every frame of every episode was extraordinary.  Star Trek Continues is the product of deep love for Star Trek, and as such I love it enormously.  With their tenth and eleventh episodes, “To Boldly Go” parts 1 & 2, Vic Mignogna and his team are not only bringing their fan-series to a close, but they are also attempting to give the Original Series (cancelled by NBC after three seasons) the proper send-off it never got.

Picking up right where the previous episode left off, the Enterprise and the Romulan vessel (commanded by the Romulan Commander from “The Enterprise Incident”) confront the cadre of superhumans who have been enhanced by passage through the galactic barrier (just as Gary Mitchell and Elizabeth Dehner were in the Original Series’ second pilot, “Where No Man Has Gone Before”) and commandeered a starship.  Even the Enterprise and Romulans together prove no match for the super-powered “Espers,” who disable the Enterprise and set a course for Earth, ready to wreak havoc and take control of the Federation.

As with Part one, this finale is packed with surprises and fun Star Trek connections.  This is a fast-paced, action-packed episode that also peppers in some wonderful character moments for members of the Enterprise crew.  The excellent script by sci-fi novelist Robert J. Sawyer and James Kerwin (Vic Mignogna also has a story credit) strikes an excellent balance.

Once again, the visuals are extraordinary.  The starship battles are extremely well-realized.  These CGI effects are far beyond what the Original Series ever showed us, and yet the effects feel like they perfectly belong in an Original Series episode.  This is because the shot compositions have been carefully considered to recreate the look and feel of Original Series shots, and the Enterprise and the other ships move exactly right.  They don’t zip around like Star Wars ships; they move with the grace and elegance that these ships should have.  It is a delight to see the classic Enterprise depicted so beautifully.

This episode proves a wonderful showcase for Kipleigh Brown, an actress who appeared briefly on Star Trek: Enterprise and who has been a recurring character on Star Trek Continues as Enterprise bridge crew-member Smith.  “To Boldly Go” part one clarified that Ms. Brown’s character was the same Smith seen briefly in “Where No Man Has Gone Before,” and this episode makes clear why Ms. Brown has been in this series.  It’s a clever idea that works perfectly with what we saw in “Where No Man Has Gone Before” to establish that Smith also was gifted with god-like powers.  I love Smith’s speech to Kirk about how he didn’t even know her name when she first came on board (which connects nicely to “Where No man Has Gone Before” and also pays off a recurring gag in Star Trek Continues) and it was delightful to see Smith get a heroic send-off.

Michele Specht has played ship’s counselor McKenna throughout Star Trek Continues, and she too gets a fine send-off in this episode.  Since we don’t see McKenna in any off the movies (the character was created for Star Trek Continues), I suspected this finale would tell us why.  And that tender Spock-McKenna scene that opened part one led me to believe that McKenna wasn’t going to make it out of this finale alive.  In the end, I was right on both counts.  McKenna’s final scene in the transporter room was lovely.  I just wish the show hadn’t telegraphed her demise.  I also wish the show had better developed her relationship with Spock over the whole run of the series.  While McKenna’s final send-off was a beautiful scene, I don’t quite buy Spock’s role in her death being what caused him to pursue Kohlinahr.

Which brings me to the many fun ways in which this finale was crafted to connect with the events of Star Trek: The Motion Picture.  We see the Enterprise suffer tremendous damage, necessitating the refit.  I loved the shot of the wounded Enterprise pulling into the orbiting scaffolding, in which we will see the refit Enterprise docked at the beginning of TMP.  I liked seeing the Enterprise crew assembled in the shuttlebay, as we see them do in TMP, and of course seeing Vic Mignogna as Kirk outfitted in the TMP-style uniform was a hoot.  I loved seeing Fleet Admiral Nogura (a character who seems to have great importance in TMP but who was never actually seen on-screen).  I liked that McCoy’s decision to retire was based on his desire to reconnect with his daughter, and I liked that Spock doesn’t actually come out and tell Kirk that he is planning on beginning Kolinahr.

As always, there were one or two story beats that didn’t work perfectly for me.  During the long scene in which Spock negotiates with the Espers and considers beaming McKenna over, we lose the momentum of what Kirk is up to in Engineering and what the heck the Romulan ship is doing while that long discussion happens.  I don’t understand how a “cold engine restart” would help the Enterprise have warp power again after we saw the nacelle get damaged by phaser fire.  I am not sure how the heavily damaged Enterprise could have possibly returned to Earth under its own power at the end.  These were issues, but I had far more story problems with pretty much every single episode so far of Star Trek Discovery, as you can see from my reviews!

* There has always been fan speculation that the original Enterprise was capable of the type of Saucer Separation that we saw the Enterprise D do a few times in TNG.  I loved how this episode used that idea!

* I also loved the way this episode incorporated the fan idea that, after the events of the Original Sees, Starfleet adopted the Enterprise’s arrowhead emblem as the symbol for all of Starfleet.  (The makers of Discovery forgot, or chose to ignore, that in the Original Series not all of Starfleet used the arrowhead symbol — every Starfleet ship had a different insignia.)  I also loved the two different explanations the episode gave for what that symbol meant.

* I enjoyed the way Smith used Kirk’s “let me help” mantra to convince him to allow her to fight on their side.

* Nice reference to the Regula system.

* I enjoyed seeing how the ship models glimpsed in Nogura’s office included the Kelvin and also the Discovery.

* I enjoyed hearing a few bars of Jerry Goldsmith’s Star Trek: The Motion Picture theme, and also a little bit of James Horner’s Star Trek II music over McKenna’s final scene.  Both choices made me very, very happy, and helped provide a lovely bridge between the Original Series and the Trek movies.  I should also praise the episode’s original score, composed and conducted by Andy Farber.  The music for Star Trek Continues has always been terrific, and Mr. Farber’s original scores for the past several episodes have been fantastic, perfectly of-the-style of the Original Series.

* That final shot of the episode was perfect, and I was pleasantly surprised to see “The Human Adventure Continues” text (which appeared at the end of TMP) after the credits.  That was a perfect touch.

I am truly going to miss Star Trek Continues!!  I am so sad that Paramount/CBS have crushed so many of the wonderful Star Trek fan film projects.  It is a huge loss.  But for now, let’s focus on the positive.  Vic Mignogna and his incredible team of talented fellow Star Trek fans have created ELEVEN complete new Star Trek episodes!!  This is a staggering achievement.  Even the very worst episode of this series is an incredible accomplishment,  and over-all the quality of Star Trek Continues was very high.  I am without the words to describe the amazing skill on display in every single frame of the series.  These episodes truly looked and felt as good as, if not better, the Original Series ever did!  They were supremely faithful in recreating the sets and costumes and hairstyles and props — and so much more — of the Original Series, while at the same time not being afraid to tread new ground.  Mr. Mignogna and his team achieved what they set out to do: to create another season of the Original Series and to connect the Original Series to The Motion Picture.

I hope that Mr. Mignogna and every single one of the amazing Star Trek fans involved in this production, on both sides of the camera, are proud of what they have accomplished.  I have loved every minute of watching these episodes, and I know that I will be rewatching these eleven Star Trek Continues episodes many more times in the future.

I thank Mr. Mignogna and his team, and I wish them all the best in all their future adventures.  Live long and… you know.

Read all of my Star Trek Continues reviews here.