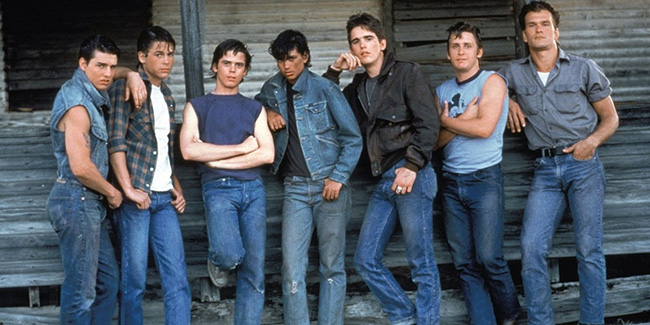 I’m an enormous fan of Francis Ford Coppola.  His films of the seventies, including The Godfather Part I and Part II, The Conversation, and Apocalypse Now, are among my favorite films of all time.  And yet, weirdly, despite my being a huge fan, I’d never seen a number of the films that Mr. Coppola directed in the eighties.  Recently I decided to finally find and watch several of them.  I started with The Outsiders, Mr. Coppola’s adaptation of the novel by S.E. Hinton.  The version I watched was not the theatrical version, but the extended and reworked version that Mr. Coppola created in 2005, which he retitled The Outsiders: The Complete Novel.  (Note: The version I watched was the 2014 blu-ray release of 2005 edit of The Outsiders: The Complete Novel.  Not long after I watched the film, Mr. Coppola released a new 4K version of The Outsiders: The Complete Novel.  I’m unclear if this was a third version of the film, or the same 2005 extended version in 4K.)

The Outsiders is set in in Tulsa in the 1960s, and depicts a tumultuous few weeks in the life of a teenager called “Ponyboy” Curtis (played by C. Thomas Howell).  Ponyboy and his friends are part of a gang called the Greasers; they’re in a fierce rivalry with the rich kids from across town called the Socs (pronounced Soh-shes).  Ponyboy lives with his older brothers Sodapop (Rob Lowe) and Danny (Patrick Swayze); their parents have passed away.  Also in the Greasers are Johnny (Ralph Macchio), Dally (Matt Dillon), Two-Bit (Emilio Estevez), and Steve (Tom Cruise).  (I’m not sure what the deal is with all the weird names — I assume they’re nicknames, but even Ponyboy’s teachers call him that…)  One night at the drive-through, Ponyboy meets the uptown girl Cherry (Diane Lane), after she gets into an argument with her boyfriend from the Socs.  This leads to a group of Socs jumping Ponyboy and Johnny later that night; when things turn ugly, Ponyboy and Johnny go on the run.

I quite enjoyed this film!  There are aspects of it that felt dated or that didn’t quite work for me, but there’s a lot to enjoy here and I’m glad to have seen it.

First of all, that cast: wow!  Bravo to Francis Ford Coppola and Fred Roos (who produced and cast the film) for assembling this incredible group of young people, pretty much all of whom would go onto be huge stars.  (Watching The Outsiders made me think of Diner, made the previous year in 1982, which also had an amazing cast of young people who would go on to be very famous.)  The Outsiders is interesting in that it’s a film with basically no adults.  All of the main characters (and almost all of the minor ones) are kids, so the casting of those kids was critical for the film to work.  Mr. Coppola and Mr. Roos hit that aspect of the film out of the park.

Ironically, the least famous of the ensemble today is C. Thomas Howell, who played the lead, Ponyboy Curtis.  But Mr. Howell is terrific as Ponyboy, giving him enough heart and sensitivity that we root for him, and that it makes sense that he’s the narrator of this story.  The famous movie poster for The Outsiders showcases the whole group of Greasers, but this is really Ponyboy’s story.  Mr. Howell is very strong in the lead role.

A year before he would explode in The Karate Kid (in 1984), Ralph Macchio is terrific here as Ponyboy’s close friend Johnny.  We can see right from the beginning that Johnny has a tough life; his parents argue and don’t seem to have much interest in him, and being a small kid he’s an easy target for the Socs.  But Johnny has a sweetness and vulnerability that makes him endearing; I can see why he and Ponyboy are such close friends.  It’s great fun to see Mr. Macchio here; he’s always been so indelibly Danny LaRusso in my mind that it’s a joy to see him play a very different character here.  He’s great.

A very young Rob Lowe plays Ponyboy’s brother Sodapop.  Mr. Lowe gives a tremendous monologue at the very end of the movie that is probably the best scene in the movie.  One can see the seeds of his future stardom here.  (The blu-ray’s special features reveal that many of Mr. Lowe’s scenes were cut out of the original theatrical version, including some/all of this speech.  I’m glad that’s not the version I watched!)

Ponyboy and Soda’s oldest brother is Danny, played by Patrick Swayze.  Like Ralph Macchio, Mr. Swayze hadn’t yet arrived at the film that would forever define him, in his case 1987’s Dirty Dancing.  And as with Ralph Macchio, it’s a lot of fun to see Mr. Swayze play a similar but different character.  Danny is the oldest kid in the film, and he’s had to basically become a father to Soda and Ponyboy.  We see Danny struggle with that; he’s trying to be an adult and to do the right thing, but he’s also still a kid and still swept up in the Greasers-Socs rivalry.

Matt Dillon plays Dally (short for Dallas).  He’s a mentor to Ponyboy and Johnny and he looks after them… but he also seems to be the most dangerous and unhinged of all the Greasers.  Wow, Matt Dillon is terrific in this film!  I think he turns in the best performance of the whole ensemble.  I mostly know Mr. Dillon from his films in the nineties and aughts, and while I’ve never disliked him, I’ve also never thought of him as a great actor.  But he’s marvelous as Dally, all unchained youth, filled with machismo and bubbling violence.

Diane Lane is marvelous as Cherry, the good-natured upper class girl who’s a part of the Socs’ social strata, but who is able to see the Greasers as human beings, not enemies.  Ms. Lane is very strong, so it’s a funny example of the weird way that Hollywood works that she didn’t break out as a huge star after this film, as I would have assumed she would have.  (Rather, it would take until the late nineties for Ms. Lane to achieve greater fame.)  I really enjoyed her work here.  The film doesn’t allow us to get to know Cherry that well, but Ms. Lane imbues her with humanity and individuality.  In the best sense, it feels like there’s a whole other movie happening with Cherry as the star that we’re not getting to see.

I smiled to see an unbelievably young Tom Cruise as one of Ponyboy’s friends and fellow greasers, Steve.  Mr. Crusie has a small role here, but you can see the seeds of his super-stardom.  I also really dug Emilio Estevez’s work as another Greaser, Two-Bit.  Mr. Estevez’s father, Martin Sheen, starred in Francis Ford Copppola’s Apocalypse Now, so it’s fun to see Mr. Estevez here in this film.  It’s a small role, but I was really impressed with the gentle naturalism and good humor of Mr. Estevez’s performance.  As with Matt Dillon, I’ve never disliked Mr. Estevez’s work, but neither have I ever thought of him as a great actor, so it’s cool to see him do such strong work here.  (I give a lot of credit not just to these talented young people but also to the skillful directorial work of Francis Ford Coppola.)

The kids in this film lead violent, unsettled lives, but the film has a lot of tenderness in it.  This is a hallmark of Mr. Coppola’s work; he’s always looking to peel back layers to discover the humanity inside his characters.  In that respect, Mr. Coppola is a great fit for this material.  But this strength is also occasionally a weakness, and there are some moments when the film gets a little too schmaltzy or on the nose.  (As an aside, the special features talk about how some of the Rob Lowe scenes were cut from the theatrical version because preview audiences snickered to see, say, Soda and Ponyboy arm in arm in bed together.  It was normal for siblings in that era, particularly in families as poor as theirs, to share a bed together, but something about the staging of that scene feels weird.  Rob Lowe’s pretty face probably doesn’t help things, but while I’m glad that scene was reinserted into the Complete Novel version of the film, it’s one example of where Mr. Coppola’s desire to build a tender character moment wound up being a little off the mark.)

Also off the mark: the score, and particularly the intensely schmaltzy Stevie Wonder song that opens the film.  Wow, I thought that was a terrible misjudgment; that overwrought song sets entirely the wrong tone for the film.  Watching that opening sequence I was sure I would hate this film; thankfully, that music did not convey the actual tone of the story that would follow.  Sadly, I didn’t care for the rest of the film’s score, either; I thought it was too overwrought, too overtly emotional.  It overpowered the scenes.  (And, bizarrely, this is the reworked version of the score for The Complete Novel, which apparently replaced an even more operatic original score from the theatrical version.  Sheesh, if I thought this version of the score was too much, I can’t imagine what that original score must have been like.)

Some parts of the film feel a little stagey to me, and there is an over-reliance on dubbed dialogue that sticks out.  Those types of moments pulled me out of the film, and fought against the naturalism that I think Mr. Coppola’s direction and the performances of his young actors were able to reach in the film’s best moments.

In my mind, when I think of nostalgic coming-of-age stories, Rob Reiner’s Stand By Me is the tops.  The Outsiders is no Stand By Me, but it’s a solid film that I’m happy to have finally seen.  Next up is the film that Mr. Coppola made immediately after The Outsiders, featuring many of the same cast: Rumble Fish.  I’ll be back soon with my thoughts on that film!