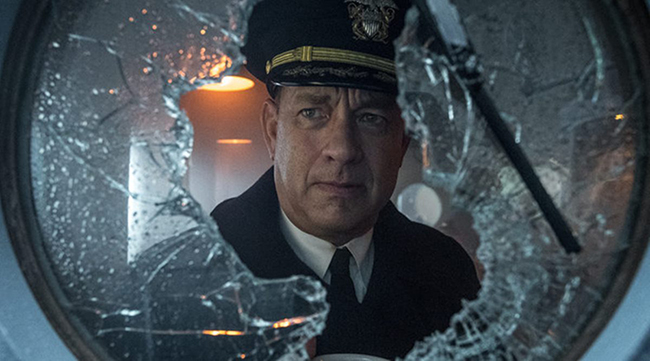 Earlier this week I reviewed News of the World, one of two great Tom Hanks films released in the latter part of 2020.  The other was Greyhound.  Based on the 1955 novel The Good Shepherd by C. S. Forester, the film depicts several terrifying days in the middle of the Atlantic during World War II.  Mr. Hanks plays Commander Ernest Krause, who has been assigned to captain the Fletcher-class destroyer the USS Keeling (whose radio call sign is “Greyhound”).  Their mission: escort a fleet of 37 Allied supply ships across the Atlantic to England.  However, for several days, the fleet is out of range of air support, during which they are terrifyingly menaced by a pack of German submarines.

Greyhound is a taut, intense thriller.  It was one of my favorites of 2020!  This is a nail-biter of a film.  I was on the edge of my seat throughout this film’s short run-time.  It’s only 91 minutes long!  I can’t remember the last mainstream drama or action film that was so short.  It’s a nice change of pace, and the film zips along entertainingly.

Tom Hanks is spectacular, as always.  He imbues Commander Krause with an endearing nobility.  (This is yet another in the list of strong leaders of men who Mr. Hanks has played in his career.)  Mr. Hanks’ skill at bringing complete verisimilitude to his characters serves him well here.  It’s Mr. Hanks’ focused commitment to the role that draws in the audience and makes us fully believe the reality of the intense and dangerous situation in which the crew of the Greyhound find themselves.

I loved how thoroughly the film (written by Mr. Hanks, and directed by Aaron Schneider) immerses the viewer in the jargon and atmosphere of this ship at war.  We’re thrown right into the middle of the story, and the film doesn’t stop to hold your hand and spell out exactly what everything means and how it works.  Nevertheless, the storytelling is crisp and clear.  I didn’t know all of the terminology, but I was never confused about what was happening.  Mr. Hanks has not written too many films, but when he does he consistently demonstrates a confident hand, and Greyhound is no exception.

Mr. Schneider and his team did a great job of realistically recreating the world of this film — the ships, the uniforms, the props, etc. — on a relatively low budget (around $50 million).  The film looks great and it never felt fake or stage-bound to me.  There are a handful of expansive, presumably CGI shots that show us the geography of the fleet of Allied ships, but for the most part the film keeps us in just a handful of locations on board the Greyhound.  That small-scale claustrophobia is important to the film’s working as well as it does, and it also helps ensure the relatively limited budget doesn’t hinder the depiction of the story on-screen.

Stephen Graham (Snatch, The Irishman, Boardwalk Empire) is great as Lieutenant Commander Charlie Cole, Commander Krause’s XO and right-hand man.  I liked the way the film quickly but efficiently sketched out the two men’s relationship. I also enjoyed the work of Rob Morgan (Turk on the Marvel Netflix shows), as the African American mess-crew-member George Cleveland.  Those were the only members of the supporting cast whose face I recognized.  Greyhound is squarely Tom Hanks’ show, but all of the other supporting players who play members of the ship’s crew did solid work.

Actually, there was one other face I recognized: Elisabeth Shue appears in one flashback scene as a woman in a relationship with Commander Krause.  That scene was the only main off-note in the film for me.  I like Elisabeth Shue, but she has nothing to play in this scene.  This woman is a non-character, who seems like she’s only in the film in an attempt to quickly establish a human connection for Commander Krause, beyond the confines of the perilous several days depicted in the film.  I wish they’d either spent more time to develop her as an actual person, or left this character out of the film altogether.

I was impressed and hooked with Greyhound.  If you enjoy WWII films and you missed it last year, I encourage you to give it a try.