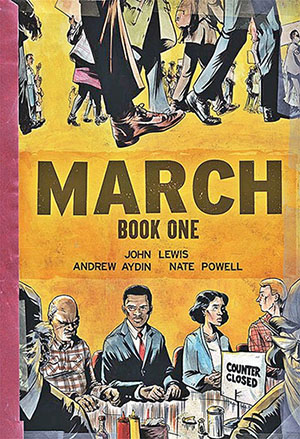 March is a three-book graphic novel series, telling the inspiring true story of Congressman John Lewis’ years spent as a leading figure in the Civil Rights Movement.  This graphic novel memoir is an extraordinary powerful, deeply moving history of the Civil Rights Movement and Mr. Lewis’ experiences during those long years of struggle.  The book is devastating in its unflinching look at the blood and horror that African Americans faced in their quest for basic human dignity in the United States… and a sobering reminder that we still have so far to go.  I would go so far as to call March absolutely essential reading.

March was written by Congressman John Lewis, along with Andrew Aydin, and it is illustrated by Nate Powell.  It was published in three volumes.  The book uses two events as its central framing pieces: the marches from Selma to Montogomery in March, 1965, and the inauguration of President Barrack Obama on January 20th, 2009.  The focus of the book is on an incredibly detailed recounting of the Civil Rights struggle, between 1958 and 1965.

Congressman Lewis is a true American hero.  Quoting President Bill Clinton, from the book’s promotional materials: “Congressman John Lewis has been a resounding moral voice in the quest for equality for more than 50 years.”  Congressman Lewis and Mr. Aydin are able to strike a perfect balance between keeping the story of March intimately focused on Mr. Lewis’s personal journey and experiences, while also creating a clear and detailed history of the events that unfolded during that tumultuous time in the fifties and sixties.  That context is critical to March’s success not only as autobiography but also as a vitally essential history lesson for readers.  It also allows the book to not fall into the trap of spotlighting Mr. Lewis’ role and achievements above and beyond all others.  Rather, the book continually pauses to introduce the reader to other important figures from the Movement, several of whom I was not previously familiar with.

As a history lesson, March was a revelation to me.  I have to admit that there were a number of horrific events depicted in the book that I was not at all familiar with.  March is unblinking in its portrayal of the horrifying violence visited upon innocent African Americans throughout the years it chronicles.  Some of these events I knew about (such as the bombing of the 16th Street Baptist Church in Birmingham, Alabama in 1963 that resulted in the deaths of four young girls and the injury of dozens of others), and many I had not.  Reading March is a wrenching experience, as it seems that every time that the groups fighting for Civil Rights made progress of any kind, another brutal series of murders and/or beatings would happen.  The inhumanity of these events is mind-boggling.

I’d hoped to read March together with my daughters, as we had recently with George Takei’s They Called Us Enemy.  But the horrors of this true history make March too much, I think, for them until they get to be a few years older.  While I was disappointed that this graphic novel trilogy is too mature for the young readers in my household, it is that same depiction of true events that makes March such an important book, and one that is so vitally relevant today.  Reading March feels like reading today’s news.  While the ultimate triumph of nonviolence at the Edmund Pettus Bridge on March 21, 1965, an event that led ultimately to the inauguration of President Obama in 2009, is an enormous victory, it is clear that the struggle continues to this very day.  March provides essential context for the events unfolding right now today across our country.

Nate Powell’s black-and-white art is incredible.  His artwork is beautiful without being too attention-grabbing.  Mr. Powell has a wonderful skill with faces, bringing just the right note of stylization and simplification to allow the reader to easily keep the book’s enormous cast of characters straight.  Mr. Powell is able to make scenes of groups of people talking in small rooms interesting, and he is able to make scenes of violence powerful and horrifying without being over-the-top graphic or gory.

One of my favorite aspects of March is the way the book depicts, in careful detail, what the nonviolent protests of the SNCC (Student Nonviolent Coordinating Committee) actually looked like; the strategies they used and the terrifying abuse and violence inflicted upon the young people who undertook these peaceful protests.  (The more things change…)  I was endlessly fascinated by the details of these efforts and all of the hard work, preparation and coordination that went into them.  And, at the risk of repeating myself, I was shocked to read how these nonviolent protests were met, time and again, with horrifying violence from white people, both policemen and other officers of the law as well as every-day civilians.

In my otherwise positive review of Ava DuVernay’s 2014 film Selma, I noted two criticisms.  First, it seemed to me that the film needlessly tweaked the facts in order to more dramatically position LBJ as a hurdle that Dr. Martin Luthor King needed to overcome.  Second, I was disappointed that, in the sequences of the third Selma march, the film made a point to show shots of many different religious figures walking alongside Dr. King and the other African Americans present, but neglected to depict any Jewish leaders, most notably Abraham Joshua Heschel, who is clearly present in photos walking right alongside Dr. King.  I was pleased that March did not, in my estimation, have either of these failings.  I thought the book was very even-handed in its depiction of LBJ; not avoiding the times when he took actions at odds with that of Mr. Lewis and others in the Movement (such as his despicable effort to interrupt the national broadcast of the testimony of Fannie Lou Hammer at the 1964 Democratic Convention), but also not painting him as a one-note villain.  And similarly, I was delighted by the one panel in volume three that made a point to depict Heschel at the march at Selma.  (That’s all I needed from Ms. DuVernay’s film!  Just one shot of Heschel in the film!)  The Jewish community and the African American community have not always been in the allies I feel they should have been to one another, and that a Jewish figure was present alongside Dr. King and John Lewis and their comrades at Selma is an important tidbit of history that should not be ignored.

Reading March will make you angry.  It should.  It should also give you hope that enormous change is possible, and that nonviolence and love can overcome hate and fear.  March is a towering achievement as a memoir, as a piece of history, and as a work of art.  Read it immediately.  Please.