Skip to the content
HomeWritten PostStar Trek: The Shocks of Adversity 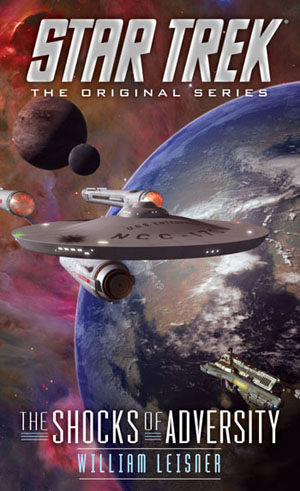 Star Trek: The Shocks of Adversity

A while back there was a lengthy interruption in the publication of new Star Trek novels from Pocket Books, a situation only recently resolved.  During the break, I went back to catch up on a stack of Trek books that’d been published over the past five or so years that I’d never gotten around to reading.  Mostly these were stand-alone Original Series books, because I’d tended to prioritize reading the new Trek novels that were connected to the expanding continuity of 24th century-set novels, taking the characters of Next Gen, DS9, and Voyager beyond the last-seen events of the on-screen shows and movies.  After reading a whole swath of Original Series novels by the great Greg Cox, I moved on to several other books by a variety of other authors.

First up was The Shocks of Adversity, by William Leisner.  While investigating a planet surrounded by a dense field of crystyalline asteroids that are nearly-invisible to sensors, the Enterprise is attacked and seriously damaged by a group of aliens using those asteroids as brute-force weapons against the ship.  With their warp drive crippled, the Enterprise is rescued by representatives from the Goeg Domain, who offer to bind their ship to the Enterprise and escort her to one of their facilities for repair.  During this ten-day journey, the Enterprise and Domain crews work together and get to know one another.  Captain Kirk, in particular, begins to form a strong connection to the Domain ship’s captain, Laspas.  Kirk is delighted to discover that the Domain is an alliance of worlds just as the United Federation of Planets is, and he enjoys the company of a fellow officer who understands the unique pressures and loneliness of command of a starship.  But what had seemed to be a new friendship turns sour when Kirk and the Enterprise discover that the Goeg are embroiled in conflict with a group of rebels from within the Domain, and that the Domain might not be as similar to the Federation as they’d thought.

The Shocks of Adversity is a crackerjack novel, wonderfully written, exciting and engaging.  Mr. Leisner has devised a terrific story.  There have been so many Star Trek stories over the years — hundreds of hours of TV shows and movies, not to mention countless books, comic books, and more.  It’s hard to tell an original Trek story that doesn’t feel like a retread, but I was pleased at how fresh Mr. Leisner’s story felt, and how he avoided predictability as the tale unfolded.

I was especially pleased at how well Mr. Leisner was able to use the entire Original Series crew.  Original Series episodes tended to focus on the triumverate of Kirk Spock and McCoy, and while the many Trek books and comics have given lots of attention to the supporting cast (Scotty, Uhura, Sulu & Chekov), it’s rare to see a true ensemble adventure for the original Enterprise crew, which is what Mr. Leisner was able to create here.  That makes me very happy.  A deep-dive into one particular character can be fun, but I love Trek stories that spotlight the entire ensemble.  Mr. Leisner’s book finds great stuff for every character.

Beyond even the main Enterprise bridge crew, I was delighted that Nurse Chapel had a fairly large role in the story, and also that we got references to Dr. M’Benga (who appeared in two Original Series episodes), as well as to Arex and M’ress from the Animated Series.  Nice!

I quite enjoyed the way Mr. Leisner developed the many new alien races and characters featured in the book.  We get to know quite a few new characters, of many different species, from the Domain, and I appreciated how well-developed they all were.  The conclusion of the novel leaves the ultimate fates of many of these characters somewhat up in the air.  While the book’s story does feel complete, and I don’t reasonably expect a follow-up, I’d be delighted for Mr. Leisner to revisit these characters in a future novel.  One can hope…

I loved the reference to dom-jot in the book’s closing pages.  Are we to understand that this game — so often referenced by the Ferengi on Deep Space Nine — was originated on a Domain world?  That’s a fun connection.  I guess that implies that, in the century between the Original Series and DS9, the Federation and the Domain had further contact… and it feels like an optimistic note that the Domain was able to resolve its internal conflicts amicably, in the end.  I like that.

The Shocks of Adversity is a terrific novel by William Leisner, a classic new adventure for Kirk, Spock, McCoy and the gang.  I’m so glad to have finally read it.