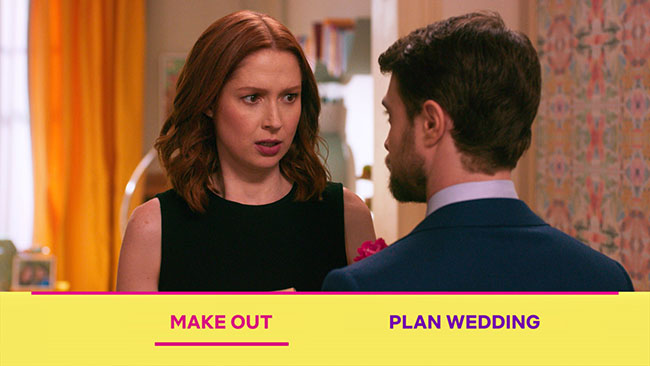 Unbreakable Kimmy Schmidt was one of very my favorite shows for the four seasons it was on Netflix.  The series was hilarious and joyous and pretty much wonderful in every way.  I was happy with the manner in which the fourth and final season wrapped up the series — but I am over-the-moon thrilled that wasn’t the end, and the series has returned for this amazing interactive special!

The Unbreakable Kimmy Schmidt Interactive Special: Kimmy vs. the Reverend is magnificent.  I could not be happier with how this came out.  Bravo to director Claire Scanlon and writers Robert Carlock, Tina Fey,  Sam Means, and Meredith Scardino.

The special utilizes the same choose-your-own adventure technology that made the Black Mirror special Bandersnatch so intriguing.  Every few minutes, the episode pauses and allows you, the audience, to choose among several possible actions for the characters to take next.  You make your choice with your remote control, and then the episode seamlessly moves forward down whatever path you’ve chosen.  The result is that there are a myriad different ways the events of Kimmy vs. the Reverend can play out.

This isn’t only fun and intriguing, it’s endlessly funny.  It turns out this interactive technology works even better with a comedy than it does with a drama, because the episode’s writers were able to mine incredible fun from the various possibilities, allowing the characters to do all sorts of crazy, funny, often fourth-wall-breaking activities.  Usually, “alts” to a joke will wind up on the cutting room floor.  Here, different jokes or ways to go with a scene have all be incorporated into the finished product.  It’s sort of genius!

Certain series of choices will take you all the way through to the “end” of the episode, though there are a variety of ways the events can wrap up.  Other choices lead you quickly to dead-ends.  In many ways, these dead ends are even funnier than the “right” choices.  (Often-times, characters will appear on-screen and berate you, the viewer, for the dumb choices you made.)  It’s clear the special’s writers mined maximum fun out of exploring all of these different avenues and dead-ends.

I had a ball playing out the episode the first time through, but I had even more fun going back and exploring some of the alternate paths I hadn’t taken on my first pass.  I have no idea how many total hours of footage were filmed, to create all of the many different paths and choices you can search out.  But I know my wife and I watched and laughed for at least an hour and a half, making our way through several different versions of the episode.

The second time through, it became clear that there was a general “flow” of events that the episode would guide you through, despite the different choices you’d make, though the details of exactly what happened would vary.  There are also some dramatically different ways the episode could play out, such as the very-different series of events that unfold depending on whether you have Jacqueline choose to complain about the script or the wardrobe when covering for Titus’ absence on a movie set.

My personal favorite choice-point in the entire episode was when Titus has the opportunity to sing “Freebird” at a bar.  You get to decide whether Titus actually knows the song, or just thinks he knows it.  I chose the latter the first time, figuring that would be the funniest.  And, indeed, it was funny to hear Tituss Burgess as Titus make his way through a song with that title he’d learned (sort of) while working at a pet store.  But the second time through, I chose that Titus knew the song, and the result was even more amazing!

All of the main cast-members have a lot of fun things to do in this special.  The crux of the story is that on the eve of Kimmy’s marriage to Prince Frederick (played with beautiful and brilliant deadpan humor by Daniel Radcliffe), she discovers that the Reverend Richard Wayne Gary Wayne (Jon Hamm) might have more women imprisoned, so she sets out to find them.  As always, Ellie Kemper is absolutely brilliant in this role, balancing Kimmy’s naivety and her strength and nobility in perfect fashion.  Jon Hamm proves for the umpteenth time his extraordinary comedic chops.  I loved how important a part of this special he was as the Reverend.  Mr. Hamm gets some of the special’s funniest moments (all the different versions of his scene with Kimmy when she visits him in prison are amazing), and he’s also involved in one of the most emotional, when he and Kimmy have their final showdown near the end.

Titus accompanies Kimmy for good chunks of this journey (depending on the choices you make) and Mr. Burgess once again gets to demonstrate his impeccable comedic timing.  Lillian (Carol Kane) throws Prince Frederick a bachelor’s party and (in some versions of the episode) forces him to come to grips with his conflicted feelings for the nanny who raised him — a dead-ringer for Lillian also hilariously played by Ms. Kane.  Jacqueline (Jane Krakowski), meanwhile, has to cover for Tituss, because he’s gone off with Jimmy, on set of the movie she got him hired for (and, in one particularly unfortunate version of events, she winds up setting back the cause of women’s rights by quite a ways).

I was delighted that the special managed to work in so many of the series’ terrific supporting cast.  Popping up in different versions of the special, depending on your choices, are: Sara Chase, Lauren Adams, and Sol Miranda as “mole women” Cyndee, Gretchen, and Donna Maria; Dylan Gelula as Xanthippe; Amy Sedaris as Mimi Kanassis; Mike Carlsen as Mikey; Fred Armisen as Robert Durst; and even Mike Britt as the theme song guy!!!

While 100% a comedy, one of the core aspects of Unbreakable Kimmy Schmidt was always the show’s focus on the treatment of women in the modern world.  I loved that this theme was also an important aspect of the story of this special.  Even more than that, I loved how the show found a way to express its moral voice in the various events that would unfold based on the choices I as the viewer made.  While some of the “wrong”, dead-end choices resulted in some of the special’s biggest laughs, it was clear that there were “right” choices that would result in better ends for the show’s characters.  (This particularly came into play when the special arrives at Kimmy’s final confrontation with the Reverend, and the various choices given for how Kimmy would respond.  I played out all the different choices, and there was one that was clearly the correct, and best, choice for Kimmy.)  I found this very effective, and very in true to the over-all positive moral tone the series has always struck.

Is this the end of Unbreakable Kimmy Schmidt?  If it is, I am completely satisfied.  I loved where this special took all of the characters, and it’s amazing for the series to go out on such a high note.  At the same time, this special was so good, I greedily hope for lots more!!  Make this an annual event!  This series, and these characters, clearly has so much life left to it.  I’d love to be able to spend lots more time in this world.  But if this is the end?  Wow.  I am so happy.  What an accomplishment.  I can’t wait to find the time to go back into this special and watch it again, to see what undiscovered paths and jokes still await me.  (Apparently, something very cool happens if you select the “skip intro” choice — something I’d never ordinarily do, because this show’s opening credits sequences is one of my favorite things ever!)

I am so happy that, for now at least, Unbreakable Kimmy Schmidt is alive (dammit!) again!