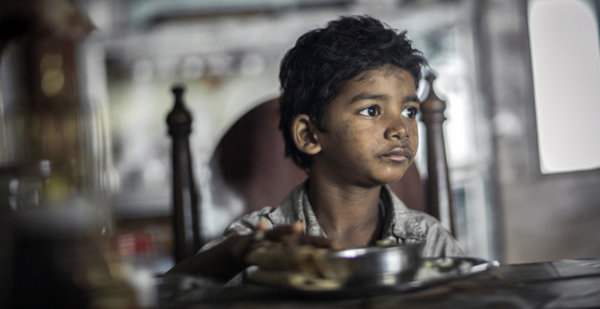 The film Lion begins in 1986.  In a poor area of Khandwa, India, a young boy Saroo lives with his mother, younger sister, and older brother Guddu.  One evening when their mother goes to work, young Saroo prevails upon Guddu to allow him to accompany him to a train station where Guddu hopes to find additional work.  But it’s late at night, and Saroo, just a little boy, falls asleep.  When he wakes up later that night, his brother is gone and he is all alone.  He wanders aboard one of the trains parked at the station and again falls asleep.  When he wakes, he discovers that the train is in motion, traveling with him locked aboard for several days until he reaches Calcutta.  Saroo has no idea where he is, in a big city where no one speaks his language.  He survives on his own on the streets for months, before eventually winding up in a large orphanage.  No one there recognizes the name of the town from where where Saroo says he comes.  Eventually, he gets adopted by an Australian couple.  Twenty years later, a grown-up Saroo is studying hotel management in Melbourne when an encounter with some other Indian young people sparks his memories of home.  He begins a years-long quest to discover where he came from, dreaming of someday finding his home and reuniting with his brother and mother, who have lived twenty long years without any idea of what happened to him.

Lion is directed by Garth Davis, making his feature film debut, and written by Luke Davies, adapting the book A Long Way Home that Saroo Brierley wrote with Larry Buttrose.  The film is extraordinary, painful to watch at times but also deeply exhilarating and emotionally rich.

I was not prepared for the emotional wallop that this film packs.  The true story that Lion depicts is incredible.  The idea that this five-year-old boy was separated from his family, left to fend for himself in a strange city where he knew no one and didn’t even speak the language, is incredibly wrenching.  It’s also incredibly inspiring that young Saroo was able to survive, never giving in to panic or despair.  The film strikes the same balance when it shifts to older Saroo.  His dreams of his lost family, of his brother returning to the train station to find him gone, are devastatingly sad.  And yet, that Saroo was able to use burgeoning internet technology to painstakingly search the Indian continent, over the span of years, looking for and eventually finding his home is inspiring and heartwarming.  Watching Lion is to get on board an emotional rollercoaster.  I cried a lot.  But when the film arrives at its ending, it is richly satisfying and emotionally exultant (even though the ending is also tinged with sadness that I will not spoil here).

This is an incredible true story.  I suspect even a mediocre film version of this story would have been powerful.  But Lion doesn’t rest on the laurels of the incredible story that it’s telling.  The film is extremely well-made, gorgeous to look at and brought to life by some phenomenal performances.  It’s amazing that this is the first movie directed by Garth Davis.

The film is beautiful, making great use of incredible locations in India and Australia.  (There’s one particular image at the start of the film, of young Saroo surrounded by butterflies, that has stuck with me.)  I love the way the camera follows young Saroo as he runs through the neighborhood where he lives, and through the surrounding woods.  That imagery, and the way the camera floats above Saroo, is striking.  It also serves the story well, as this camerawork conveys the way young Saroo knows his home like the back of his hand, something that will prove extremely important down the line.

I’d expected this film to begin with young Saroo getting lost, but that most of the film would be following the older version of the character, played by Dev Patel (Slumdog Millionaire, The Newsroom), maybe with a few additional flashbacks interspersed.  So I was surprised, but pleasantly so, with how long the film stuck with young Saroo (played by Sunny Pawar).  It’s a long, long time until we get to Dev Patel’s older Saroo.  But this choice works phenomenally well, because the film doesn’t allow us the respite of jumping to a happier, older Saroo.  No, instead we follow young Saroo through all the steps of his terrible ordeal as a lost little boy.  The audience is trapped in this situation along with Saroo, and this gives the film its resonant power.  That, and the incredible performance by young Sunny Pawar.  This sweet, smart little boy is impossible to not fall in love with.  Mr. Pawar was perfectly cast, and I applaud his work and that of his director Garth Davis for being able to work with his so successfully to create this incredible performance.

After being bowled over by this astonishing kid for the first half of the movie, it almost makes what Dev Patel has to do in the second half look easy, but that would be to underestimate the craft and skill on display in Mr. Patel’s performance.  When we first jump to Mr. Patel as Saroo, it looks like everything has worked out great for this boy, as he’s grown into a happy, intelligent, well-adjusted young man.  And, indeed, Saroo was incredibly lucky to have found his way into such a loving adoptive family.  But after a little time with this older Saroo, we see that the pain of his loss of his brother and family is still a raw wound, and as we follow Saroo over the next few years we watch him slowly fall apart as he becomes more and more consumed with finding his birth family, even as he is wracked with guilt at the thought that his search constitutes a betrayal of his adoptive family.  Mr. Patel brings this emotional journey to life, and I applaud Mr. Davis and screenwriter Luke Davies for finding a way to dramatize Saroo’s search for his family — which mostly involves staring into a computer for night after long night — in this emotional core.

Nicole Kidman and David Wenham (Faramir from The Lord of the Rings!) do a great job as Saroo’s Australian adoptive parents Sue and John Brierley.  It’s nice to hear Ms. Kidman speak in her normal Australian accent.  Rooney Mara (The Girl with the Dragon Tatoo) is also very solid as older Saroo’s girlfriend Lucy.  Ms. Mara brings a lot of life to this character who doesn’t have much to actually do in the story, but who is nevertheless an important person in Saroo’s life.

The ending of the movie is profoundly moving.  The inclusion of some actual footage, at the very end, of several of the real people who had been portrayed by actors in the film, is incredibly and well-chosen and a perfect note to include as an ending.  I also loved how the explanation of the film’s title was held until the very end — it packs a punch when we learn what it means.  (In the last act of the film, I’d wondered to myself several times, “so why is this film called Lion?”  The answer is wonderful.)

I knew very little about this film or the true story it was telling, going in to seeing it in the theatre.  I am happy that was the case.  This is a film best enjoyed without knowing too much about it.  Allow this incredible true story to sweep you along with its rhythms as the tale unfolds.  Lion is a film that I highly recommend.