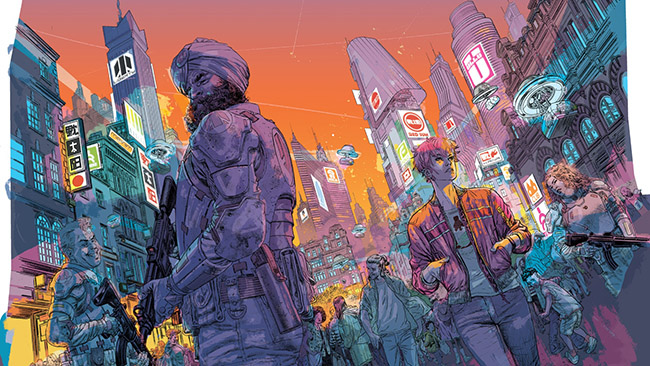 Duncan Jones has described his 2018 film Mute as the second part in trilogy of loosely-connected sci-fi films set in the universe of his breakout 2009 film Moon.  Mr. Jones has spoken of being unsure that he’d be able to raise the funds to make his third planned film; instead, last year he and co-writer Alex de Campi launched a kickstarter to create a graphic novel of this story.  Madi: Once Upon a Time in the Future is a 260 page graphic novel published by Z2 Comics that is available here from that publisher or here from Amazon.

Madi is set in the near future; it introduces us to a young woman named Madi, a former British soldier who has had much of her body replaced with cybernetics so as to be a better soldier.  Madi is no longer in the military, but she’s still paying off the cost of those implants, and so she and several of her fellow enhanced former soldiers have become a group of mercenaries for hire.  After a job goes wrong, Madi goes off on her own and gets herself hired by the head of a corporation to steal secrets from a rival company.  Those secrets turn out to be embedded in a cybernetically-enhanced young boy named Dean.  Rather than turn him over to be taken apart, Madi and Dean and a hacker named Ted wind up on the run.

I quite enjoyed Madi!  This would make an awesome movie.  As it is, it’s an extremely enjoyable graphic novel.  (Click here for an in-depth interview with Duncan Jones & Alex de Campi in which they discuss the decision to create Madi as a graphic novel, and the process of doing so.)

I love the world-building in the book.  The story is set in a futuristic world that has lots of fun details and idiosyncrasies to be discovered.  At the same time, the tale of battling corporations who treat people as disposable feels extremely relevant.  That’s a compelling balance!  I love exploring the world of this story.  Clearly a lot of thought was put into creating and developing this near-future setting.  The world of Madi feels real and thought-out in a way that enhances the best sci-fi stories, in any media.

Madi is set in the same world as Moon and Mute, but the stories are completely stand-alone.  The connections are actually extremely tiny, little more than seeing the “fly meal” packages (fast-food delivered by drones) that we saw in Mute.  However, having seen those prior films, particularly Mute, it’s fun for me to see how, for example, what we glimpsed of a future city in Mute (in that case, Berlin) is expanded upon in this story, which takes place in many different futuristic locations/cities.  Madi gives us a far stronger sense than either of those two films as to what this near-future society is actually like.

The main story is much more focused than that of Mute.  One of my main complaints about Mute was that I felt the story was too complicated and too scattered, with too many characters and no clear narrative to follow, or clear main character(s) for me to latch onto as an audience-member.  But here, we have three clear main central characters who we follow through the story.  However, if Madi has a weakness, it’s the same lack of clarity that I felt plagued Mute.  I’m an attentive reader, and yet when I arrived at the end of Madi, I found myself still confused about many aspects of the story, about the nature of certain character relationships and without a clear understanding of why certain characters did what they did.  (For instance: were Madi and Rhonna actual biological sisters, or just sisters-in-arms?  How did Madi connect with Steven to get hired for the job that sets the story in motion?  Why did Ted agree to come along on the run with Madi in the first place, and why did he make the choice he makes at the end?)

Madi is illustrated by an incredible array of artists, each illustrating a short (approx. 10-20 page) section of the story.  Several of these artists were already among my favorite comic book artists (such as Duncan Fegredo, who illustrated the cover image seen above, along with David Lopez, Tonci Zonjic and Pia Guerra).  Several others are now for sure on my mental lists of artists whose work I’ll be paying close attention to in the future (such as Dylan Teague, Annie Wu, and Chris Weston).  The varied artists are a bit of a mixed blessing.  It’s very cool to see these different talented artists each bring their own unique interpretation to the world and characters of the story.  The visual inventiveness in this book is extraordinary.  And I’m sure that the use of multiple artists was seen as the only way to get this 260-page massive story actually completed and published in a reasonable amount of time.  However, I also think it hurts the flow of the story to have a constantly shifting art style.  It was jarring to me every time the art changed, and it made following this already complicated story even more challenging.

That critique aside, I quite enjoyed Madi.  It’s cool to see Duncan Jones and Alex de Campi’s vision for this sprawling sci-fi story.  While I still think Mr. Jones’ strongest work was the simpler and more self-contained Moon, I respect the ambition of this tale.  I’m delighted to have read it.  If Madi someday becomes a feature film, I’ll be buying a ticket for sure!  If it remains as a graphic novel only, it’s still a wonderful graphic novel and one I’m very pleased to have read.