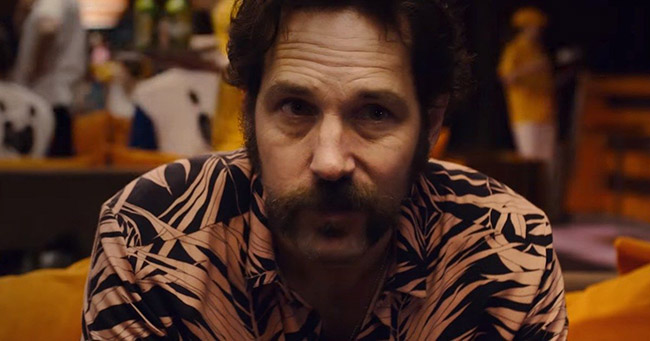 I was blown away by Moon, Duncan Jones’ 2009 directorial debut.  It’s a fantastic original sci-fi film, featuring Sam Rockwell in a terrific leading performance.  (Well, actually multiple terrific leading performances… watch the movie!)  Unfortunately, I haven’t been nearly as taken by the follow-up films directed by Mr. Jones that I have seen, such as Source Code and Warcraft.  In 2018, Mr. Jones’ film Mute was released on Netflix.  I was excited.  I’m always interested in original sci-fi premises, and the film looked like it had an incredible cast.  Even better, Mr. Jones described Mute as a “spiritual sequel” to Moon, and so of course I was eager too see what that meant.  But Mute’s reviews were atrocious, and for one reason or another I never caught up with the film until recently.

The titular mute is Leo, played by Alexander Skarsgard.  Leo was horribly mangled in a boating accident as a boy, rendering him unable to speak.  He works as a bartender in a futuristic Berlin, and is in a relationship with one of the waitresses at the bar, Naadirah (Seyneb Saleh).  When Naadirah vanishes, Leo begins a relentless hunt through the scuzzy underbelly of the city in an attempt to find her.  This brings him into contact with Cactus Bill (Paul Rudd), an AWOL American G.I. working as a surgeon for a local crime-boss, as well as Bill’s scumbag friend and fellow surgeon Duck (Justin Theroux), and many other sketchy and dangerous characters.

I really wanted to like this film; I was hoping that it’s bad reputation was unearned.  It’s definitely not a catastrophe, but unfortunately in the end I felt it was a misfire.  It just didn’t work for me, though there was a lot that I enjoyed.

I loved the film’s imaginative futuristic setting: the cool, gritty, dirty, Blade Runner-esque future Berlin.  The film and all of its sets/locations were beautifully well-designed.  The world-building is top-notch.  The film is set in an unnamed near-future year, and I loved that what we saw of Berlin was futuristic but at the same time very real and grounded.  That was very cool.  This is a much larger-scale film than Moon, and it’s fun to see Mr. Jones and his team stretch their wings to bring this sci-fi setting to life.  I’m sure this film was made on a budget that’s a fraction of a big studio epic, and Mr. Jones and his team really made the most of their resources.  The film looks great.

The film’s cast is strong.  Alexander Skarsgard cuts an imposing and memorable figure as Leo.  Mr. Skarsgard’s expressive face helps us bring us inside this silent and closed-off character.  Paul Rudd is a lot of fun to watch.  He’s very funny in the film, and it’s fascinating to see how the script and his performance combine to tweak his generally good-natured screen persona into that of a prick.  Justin Theroux’s performance as Duck is very funny and very weird.  Seyneb Saleh doesn’t have much screen time as Nadirah, but she’s able to effectively establish Naadirah as someone who Leo — and we, the audience — care for, and so we are engaged by Leo’s search to find her.  I loved seeing Dominic Monaghan pop up for one very memorable scene as a sort of Kabuki sex artist.

I liked the intriguing set-up the movie established for Leo.  The idea of a mute Amish boy in futuristic big bad city has a lot of potential.  I was less interested in the cliche of the beautiful woman with secrets who disappears.  But I quickly realized that this was a very noir set-up, and I was engaged by the idea that Mr. Jones and his team were setting out to create a sci-fi noir.

The problem for me is that I felt the movie was too all over the place.  There were too many weird left turns, with too little for the audience to hang onto.  As an audience member I should have been locked into Leo’s increasingly desperate and dangerous search for Naadirah.  One of the problems, I think, is that the movie spends too much time away from Leo.  There are too many other characters and for a while in the middle of the film I wasn’t sure whose film this really was and who the central character was supposed to be.  Most notably, we spend a lot of time with Paul Rudd and Justin Theroux’s characters.  For a while I thought maybe Paul Rudd’s Cactus Bill was actually the film’s main character.  In thinking about this film and questioning why I didn’t connect with the story as much as I’d hoped to, I’ve come to feel that perhaps part of the problem is that the Rudd/Theroux scenes unbalance the Leo scenes.  Paul Rudd and Justin Theroux are terrific together; so it’s not that their scenes were bad.  Their scenes were great!  Perhaps too great.  I suspect Mr. Jones and his team enjoyed those scenes and so didn’t want to edit them out.  But watching the movie I found myself wondering why we were spending so much time with these two characters.  Of course, their stories do intersect with Leo’s journey by the end of the movie, but I don’t think the time we spent with those two characters was warranted.  In fact, I think the film would have been improved with less Cactus Bill and Duck, and a tighter focus on Leo.  (There certainly have been successful films with parallel narratives, following two different main characters.  The Godfather Part II is one of the best examples.  But in films like that, I wasn’t confused — as I was here — about what these two narratives had to do with one another and why we were following them both.)

A secondary, but connected, problem with the film in my opinion was that the nature of the characters, and their relationships, were far too unclear to suit me.  I can understand wanting Leo to have some mystery in his background that would be clarified by the end of the film.  But there were too many other characters and relationships that I felt were unexplained, as I was watching the film.  For instance, I had a hard time figuring out what Justin Theroux’s character Duck’s deal was and what his relationship was with Paul Rudd’s character Cactus Bill.  Even by the end of the film I was still unclear why Naadia was involved with Cactus Bill, or why Duck was texting messages to Leo, or why Duck performed surgery on Leo.  If the movie answered any of those questions, I missed it.  For a film as complex as this, with a central mystery but not a strong central character, I think these character relationships needed to be clearer for the audience to be able to follow and connect with the story as it was unfolding.

This was also a film that was difficult to watch at times.  Things start off rough with the gruesome opening scene, in which we see young Leo mangled by a boat’s propellors.  There are several other gruesome scenes later in the film, such as a gratuitous surgery scene with Cactus Bill and Duck.  I know some viewers love gore in their films, but for me it was one more off-putting element in a film that I was struggling to connect with.

For a film that Mr. Jones and others have described as being the second part of a “Moon trilogy”, this film has almost nothing to do with Moon.  It’s a completely stand-alone tale.  The only connection to Moon is that there are a few short moments in which we see Sam Rockwell’s character, Sam Bell, on TV.  (Actually, we see multiple Sam Bells, which made me laugh!)  I love Moon and seeing those glimpses of Sam Bell made me very happy.  But while Mute might be set in the same world as Moon, the two are entirely separate, stand-alone stories.

The last comment I want to make about Mute is that I had mixed feelings about the film’s presentation of trans characters and others across the sexual and gender spectrum.  On the one hand, it’s wonderful to see characters who don’t fit squarely into a straight male or female box.  That felt progressive.  On the other hand, all of these characters felt to me like they were part of the strange and seedy underworld that Leo was exploring… in contrast to the straight, white hero character of Leo.  Even though these characters weren’t villains (well, other than the pedophile Duck), they were still presented in a way that felt “other” to me.  So that felt regressive.

I’m glad to have seen Mute, and this definitely isn’t a film without merit.  I respect the ambition of Mr. Jones and his team in setting out to tell this original, expansive sci-fi tale.  The film looks great; it’s very well-directed, with beautiful visual effects, design, props, costumes, etc.  There’s a strong cast who do their best to create memorable characters.  Unfortunately, the elements just didn’t come together for me, and while I’m happy to have finally had a chance to see this film, it was not a film I expect to revisit any time soon.  I remain a fan of Duncan Jones, and I’ve already purchased and read Madi: Once Upon a Time in the Future, which is the graphic novel conclusion of Mr. Jones’ “Moon trilogy.”  I’ll be back shortly with my thoughts on that!