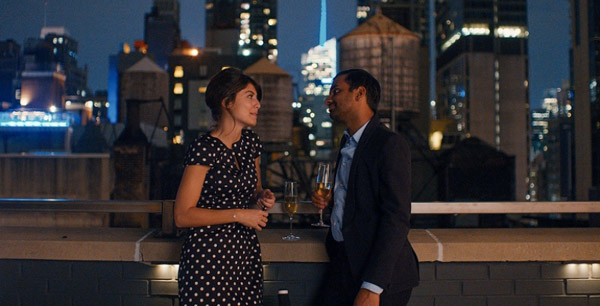 The wonderful and dearly-missed Parks and Rec made me a big fan of Aziz Ansari, and so I eagerly followed him to Master of None, a show he created (along with Alan Yang) and ran (ditto) and also starred in.  I thought the first season was marvelous, funny and heartfelt.  It felt adventurous; the work of a small group of young, talented artists eager to stretch what a TV show could be.  Season two is even better and bolder, brimming with confidence, as if Mr. Aziz and his team were saying to us, “OK, now sit back and see what we can really do.”

Just as the first season had, as its narrative backbone, the relationship between Dev (Aziz Ansari) and Rachel (Noël Wells), season two follows the slow course of the friendship and maybe-romantic relationship between Dev and Francesca (Alessandra Mastronardi), a beautiful young Italian woman who Dev meets in Modena.  As was the case in season one, the strong writing and terrific performances quickly hooked me into this story-line.  As an audience-member you quickly grow to care for both Dev and Francesca (as we had previously with Rachel), and root for their happiness.

While that story-line gives the season a structure, and a momentum from episode-to-episode, I love that Mr. Ansari and Mr. Yang have continued to resist the newly-popular, and somewhat problematic, format of having all the episodes of a streaming season run one into the next like one long movie chopped into little bits.  To my delight, this season strikes a perfect balance between telling a complete story from start to finish while also allowing each individual episode to be distinct on its own.

The story-telling and stylistic inventiveness that I enjoyed in season one has been taken to an even higher level here in season two.  Each individual episode of the season demonstrates a near-boundless freedom to explore different directions stylistically and in terms of content, topic, and structure.  It’s marvelous to behold.  Here are just a few examples: The first episode, “The Thief,” finds Dev in Italy learning to make pasta, and the entire episode is filmed in black and white in homage to the Italian films we learn Dev enjoys, particularly Vittorio De Sica’s Bicycle Thieves.  What an adventurous, clever way to begin this new season!  In “First Date,” we follow Dev through a series of first dates with women he has met on a dating app, some more successful than others, which are all edited together, allowing us to bounce back and forth from date to date as if they were all happening on the same night.  It’s a master class in writing and editing and performance, and the result is one of the highlights of the season.  In “New York, I Love You,” we abandon the main cast almost entirely to focus on three new characters we’ve never seen before, and their own group of friends and co-workers.  It’s a remarkable glimpse into the lives of people who each represent different aspects of the New York experience but who are not usually represented on TV.  I can’t believe how deeply I fell in love with all of them, by the end of the half-hour.  I would love to see these characters again in a future season!  In “Thanksgiving,” we track Dev and his friend Denise through many of the Thanksgivings they have celebrated together since they were little kids.  In addition to being yet another successful experiment with the show’s format, the episode is also a wonderful spotlight on Denise and her journey towards allowing her family to see her for who she truly is, and their journey towards accepting her.  Then there is the season’s penultimate episode, “Amarsi Un Po,” an hour-long episode that focuses intimately on Dev and Francesca’s attempts to come to terms with what they feel for one another. An hour long episode could have been indulgent, but it works beautifully as a heartfelt romantic story that keeps the audience fully engaged.

Are you starting to understand what I meant when I said that this show was endlessly inventive?  I just listed five of the season’s ten episodes, and rest assured the other five episodes are just as good.  I loved how season one of this show allowed individual episodes to explore different themes and ideas that Mr. Ansari and Mr. Yang were clearly interested in themselves, and that trend continues in season two.  The best example is the third episode, “Religion,” in which we see how Dev’s parents feel the need to come across as more religious when with their more-observant relatives are around, and how Dev himself doesn’t feel the connection to religion that his parents do, even though they are less observant than their other family members.  This is a fascinating topic, period, and it’s especially delightful that the religion in question is Islam.  I am sure I don’t have to tell anyone reading this how notable this feels on American television in this day and age.

That episode is also a great example of season two’s continuing another wonderful trend from season one: Mr. Ansari and Mr. Yang’s interest in exploring the feelings and lives of their parents, in addition to the show’s thirty-something aged main cast.  Mr. Ansari’s real-life parents once again portray Dev’s parents on the show, and they are again terrific.  Mr. Ansari’s father, Shoukath, is particularly endearing.  (The scene in which he and Dev are in his office at his medical practice, and he talks to Dev about all the objects he has taken out of people’s butts, is a stand-out moment in a season full of stand-out moments!)  I was also quite taken by the story in “Door #3,” in which Brian (Kelvin Yu, standing in for co-creator Alan Yang)’s dad starts dating again, and winds up dating two women at the same time.  What other show would devote so much screen-time to the dating life of a sixty year old man??  (And how funny is Brian’s dad’s deadpan line delivery??)

I enjoyed the group of actors who played Dev’s friends in season one, and I am pleased that they were explored more deeply in season two.  Arnold (Eric Wareheim) in particular gets a lot of attention, especially at the beginning of the season when we see him join Dev in Italy.  There is, of course, instant comedic value from the juxtaposition of the very-tall Mr. Wareheim with the petite Mr. Ansari, but beyond that, this season really developed Arnold as a character and explored his friendship with Dev.  Mr. Wareheim (the Eric from “Tim and Eric”) takes full advantage of his additional screen-time this season, stealing almost every moment he is in.  Mr. Wareheim also skillfully directed a number of episodes!

As the season went on, I commented to my wife that I wished the show would spend more time with Denise (Lena Waithe), as she seemed the least-developed member of the ensemble.  Then, wham, came the brilliant “Thanksgiving” which was a spectacular showcase for that character and also for Ms. Waithe as an actress.  I loved it.  Suddenly I felt I completely understood who Denise was.  (Angella Bassett turns in a strong guest appearance in that episode, playing Denise’s mom.)

This season’s big discovery was Alessandra Mastronardi as Francesca.  Ms. Mastronardi has been getting a lot of press, and deservedly so, for her work on the show.  She is spectacular, instantly endearing and affecting.  We fall in love with Francesca just as Dev does.  Ms. Mastronardi is able to carry the comedic moments along with the dramatic and romantic ones.  She has great chemistry with Mr. Ansari.

Speaking of whom, it’s about time I got to Mr. Ansari himself.  Watching this second season I was bowled over by what an impressive achievement this season represents for Mr. Ansrai as an actor, writer, and creator.  He has managed to create a singularly unique piece of work in the way that few before him have been able to do on television.  (In terms of the modern television landscape, the closest comparison is Louie, which also represents the distinct point of view of a comedic performer, in that case Louis C.K.). What’s wonderful about Master of None is that there is no easy comparison to make to other TV shows.  The show is wonderfully unique and distinct.  I don’t think I can over-estimate what a near-impossible that is to pull off.  Bravo to Mr. Ansari, and to his co-creator Alan Yang.

* I haven’t even mentioned Bobby Canavale, who is spectacular as Dev’s new boss, famous TV personality “Chef Jeff.”  Mr. Cannavale creates an instantly-memorable character, loud and brash.  I was happy that Chef Jeff seemed to take a shine to Dev, but I spent the entire season waiting for the other shoe to drop.  When it does, it’s just as spectacularly messy as I had expected.

* Speaking of waiting the whole season for something spectacularly messy, I was disappointed at first that season one ended with Dev and Rachel splitting up, and I’d hoped that maybe Noel Wells would still be a part of the show.  Sadly that wasn’t the case, but I did still keep hoping she would pop up.  When she does at last make a brief reappearance, it as at exactly the worst possible moment for Dev.  I had loved Ms. Wells and her character of Rachel in season one, and yet when she appeared here I was so with Dev at that low moment that her appearance was as much a twist of the knife for me as a viewer as it was for Dev.  What a brilliant piece of writing!

* How great is that silent, long final shot of Dev in the car at the end of “The Dinner Party”?  That was an unexpected way for that episode to end, and I loved it.

* I was a little surprised that the British woman, Sara (Clare-Hope Ashitey), with whom Dev hit it off before having his phone stolen, didn’t reappear by the end of the season.  Dev’s losing his method of contacting Sara was such a sad and surprising way to start the season!  I’d love for her character to reappear in the future…

* We have to talk about that last shot of the season.  What an interesting, perplexing way to end.  When I first saw it I was convinced it was a flashback, but some internet sleuths have now convinced me otherwise.  Viewing that brief shot as a flashback, it seemed a wistful way to end the season, looking back at what might have been.  But if that shot was NOT a flashback, it is even more bittersweet.  I’d be delighted if Dev and Francesca did get together, but the expression on her face leads one to believe this is not a simple happy ending.  I am impressed by the bravery of ending the season on such an uncertain tone.  Mr. Ansari has said that it might be a while before he feels ready for a season three, but boy does that last shot leave me desperate to know what happens next for these characters!

I highly recommend Master of None.  This is one of the best TV series currently out there.  Don’t miss out.