Skip to the content
HomeWritten PostJosh Reviews The Revolution Was Televised 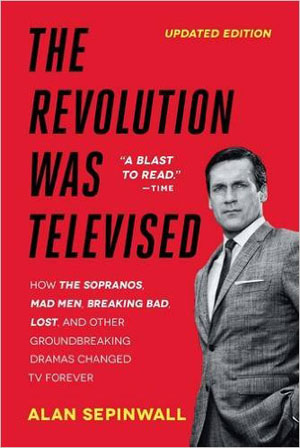 Josh Reviews The Revolution Was Televised

I am an enormous fan of television critic Alan Sepinwall, who I first started reading when he began writing for the sadly now-defunct Hitfix.com.  Mr. Sepinwall’s writings currently appear on Uproxx.com, and I read his column multiple times a week.  Mr. Sepinwall is an extraordinarily astute critic and a terrific writer.  He was an early champion of the style of writing weekly reviews of TV shows on-line, and when I’m watching a great show I love to follow up my viewings by reading Mr. Sepinwall’s comments and analysis.

I was aware that Mr. Sepinwall had written a few books, and I’m thrilled that I finally made time to read The Revolution was Televised.  This 2012 book, updated in 2015, analyzes twelve dramas that, in Mr. Sepinwall’s estimation, changed the face of television in the 21st century.  These TV shows are: Oz, The Sopranos, The Wire, Deadwood, The Shield, Lost, Buffy the Vampire Slayer, 24, Battlestar Galactica, Friday Night Lights, Mad Men, and Breaking Bad.

Each show gets its own chapter in the book, in which Mr. Sepinwall details the history of the development of the show and analyzes the factors that made it so special, memorable, and influential.  Each chapter is well-researched and filled with insightful interviews with that show’s key creative players.

Mr. Sepinwall is a wonderful writer, and his love for TV and for these particular shows pours off of every page.  It makes the book a delight to read.  Many of the shows featured in this book are shows that I know and love, such as The Wire, Battlestar Galactica, Mad Men, and Breaking Bad.  It’s a super-fun trip down memory lane to read those chapters, to relive the great moments from those shows and to read all about how they came to be.

I particularly loved the chapter about David Simon’s masterpiece The Wire.  I think this is truly the greatest TV show ever made.  I am fond of telling friends that The Wire ruined the rest of TV for me forever (because nothing could ever be as good) and that’s not far from the truth!  Mr. Sepinwall provides a lot of fascinating information about the road that led Mr. Simon to creating The Wire, and we get a lot of juicy quotes direct from the endlessly-interesting Mr. Simon’s mouth about the show.  I’m pleased Mr. Sepinwall highlighted the all “fuck” scene from season one (truly a milestone in TV history), and even more pleased that Mr. Sepinwall identified the show’s shift of focus in season two to be the moment that The Wire became “a work of enduring literature.”  Suddenly we all discovered that The Wire wasn’t just about the characters introduced in season one, that instead this was a larger story about “the death of an American city.”  Bingo.

I’m a sci-fi nut and so Ronald D. Moore’s reinvention of Battlestar Galactica was right in my wheelhouse.  Finally, here was a sci-fi show that was everything I always wanted a sci-fi show to be.  This was a “hard” sci-fi show — there are spaceships and alien planets and robots.  But this was also a serious, adult drama, with complex characters and riveting emotional arcs.  And, also, extraordinary sci-fi action.  I am thrilled that Mr. Sepinwall was as much a fan as I was, and that he has highlighted this extraordinary show in his book.  I love that Mr. Sepniwall includes a lengthy section of Mr. Moore’s “mainfesto” that was attached to the miniseries script, pitching his goals for the show.  It’s just one of many interesting pieces of backstory Mr. Sepinwall provides, along with a wonderfully detailed interview with Mr. Moore in which Mr. Moore shares his thoughts on varies aspects of the series’ creation and production.  I am glad Mr. Sepinwall makes note of how unusual it was for Mr. Moore and his partner David Eick to ask the Sc-Fi channel to end the show after season four.  In this current era of TV, it has miraculously become more expected for critically acclaimed TV shows to be able to end when the creators want them to end.  But not so long ago, that was wildly unusual, and it was special that Mr. Moore and Mr. Eick fought to end BSG on their own terms.  Mr. Sepinwall writes about the divisive finale, though interestingly he doesn’t mention the reason I was let down by the final season.  I actually LOVE the finale.  I think the final 30 minutes are maybe a little too simplistic, but over-all I quite enjoyed it.  But overall I felt the final season became too much like Lost, focused on mysteries (here, the Final Five Cylons) that were not explained to my satisfaction.  (Click here for my detailed review of the BSG finale.)  For me, this knocks BSG down a notch on the list of all-time great TV shows, but I still adore it and loved reading about it here.  Speaking of Lost…

Lost and 24 are shows that I loved in their beginnings, though both shows eventually broke my heart.  But I enjoyed reading their chapters as well, taking in Mr. Sepinwall’s thoughts on their highs and lows.  I’ve written a ton on this site about Lost, and I loved Mr. Sepinwall’s detailed analysis of the development and progression of the show.  This chapter, as is every other chapter, is deeply enriched by the in-depth interviews Mr. Sepinwall conducted, and here it is fascinating (if at times aggravating) to read the commentary and thoughts of show-runners Damon Lindelof and Carlton Cuse.  Mr. Sepinwall correctly highlights the season 3 finale, “Through the Looking Glass,” as a high-point of the show (“We’ve got to go back!!”).  It’s interesting to see some reflection from Mr. Lindelof and Mr. Cuse on the finale, now looking back several years later, though I am still frustrated in their failure to end the show satisfactorily.  (My complaints are NOT with the sideways stories from the final season (which some felt were a waste of time, a complaint with which I sort of agree, but I didn’t mind because mostly I thought they were fun) nor was I unhappy with the final minutes of the finale in which we learn that most of our heroes are… well… if you’ve seen it, you know.  I actually loved the final episode, except for that whole business with the plug and the light.  No, my complaint is with the final season overall, and its complete failure to answer almost any of the scores of mysteries the show’s writers had so carefully crafted and developed over the course of the first five seasons.  It felt like a complete middle finger to the audience, and to this day my heart is broken by how let down I felt by that final season.  Click here for my in-depth review of the Lost finale.  Anyways, deep breath, moving on.)

As for 24, that was a show I LOVED for its first two seasons, and I sung its praises to anyone who would listen.  24 was hugely exciting, with incredible production values and a terrific cast, and, structurally, it was unlike anything I’d seen on TV before.  Mr. Sepinwall tells the story of how the show almost lost its “real time” format for season two… something I remember reading about in between seasons one and two, hoping those were just rumors.  It’s staggering that the show almost lost its signature element!  Thankfully cooler heads prevailed.  As usual, Mr. Sepinwall has a great analysis of the show; I particularly enjoyed his 100% correct identification of the show’s “dirty not-so secret” that “the series didn’t really tell one story over a season, but rather a series of smaller arcs — some directly connected to the one before, some not — that would keep Jack moving for the full 24 hours.”  This helped the show sustain narrative tension and momentum, but also grew tedious after a few years, when the show became stuck in its patterns and unable or unwilling to adjust.  I kept watching for several years, still enjoying the show but also finding myself more and more frustrated by it.  I bailed before the final season.  (I watched the first hour of the relaunch, Live Another Day, and was disappointed that it just felt like more of the same, so I didn’t watch more.)  Still, I have such fond memories of those first two seasons, and for them alone I am glad that 24 was highlighted in this book.

There are also several shows featured in this book that I have to admit I have never seen, most notably The Sopranos (I watched the first season and loved it, but somehow never got back to watch the rest of the show), The Shield, and Buffy the Vampire Slayer.  (Being such a huge Joss Whedon fan I can’t believe I have never seen Buffy or Angel.  Someday I would love to find the time to binge those shows.  Here’s hoping.)  I enjoyed reading the chapters on those shows, as well, even though I hadn’t seen them, because it was fascinating to read why Mr. Sepinwall felt they were special.  (I had to skip over a paragraph here and there, but mostly Mr. Sepinwall avoided major spoilers.)  It’s a mark of how enjoyable Mr. Sepinwall’s writing is that I read and enjoyed these chapters, even about shows I’d never seen.  After reading this book I feel like I need to put everything else in my life aside and find the time to catch up with those shows!!!

For anyone out there who loves TV, I highly recommend The Revolution was Televised.  It’s a wonderful book, written with love by Mr. Sepinwall about the TV shows that affected and moved him.  I loved it, and I intend to get Mr. Sepinwall’s next book, TV: The Book (co-written by Matt Zoller Seitz), as soon as possible!