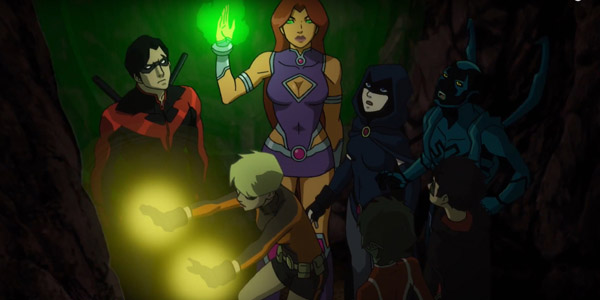 Teen Titans: The Judas Contract is the latest DC Animated direct-to-DVD/blu-ray film.  It adapts the famous Judas Contract story-line by Marv Wolfman and George Perez from The New Teen Titans in 1984.  In the early eighties, Wolfman and Perez’s Teen Titans was an enormous smash hit for DC Comics, rivaling Marvel’s X-Men in popularity.  The Judas Contract is one of the most well-known stories from the run, in which the young Titan Terra is revealed to have been working with the villain Deathstroke to learn the Titans’ secrets in order to destroy them.

This new animated film is a direct sequel to last year’s Justice League vs. Teen Titans.  That film introduced this version of the Titans into the “New 52” continuity of the past few years’ worth of DC animated films.  I enjoyed this version of the team introduced in that film, with an amalgam of characters from the classic Wolfman/Perez run (Starfire, Raven, and Beast Boy, with Cyborg and Nightwing making brief appearances) combined with characters from more recent versions (the current Blue Beetle and the Damian Wayne Robin).  Justice League vs. Teen Titans was a loose adaptation of Wolfman and Perez’s Terror of Trigon story, which delved into the origin of the young heroine Raven.  This new film focuses exclusively on the Titans, without feeling the need to shoehorn in the Justice League, and dives directly into The Judas Contract, perhaps the most famous Teen Titans storyline ever.

Overall, I was very satisfied by this adaptation.  When this series of direct-to-DVD/blu-ray animated DC films began a decade ago, The Judas Contract was one of the first storylines that was rumored to be adapted.  But year after year, it never happened.  It’s great to see that, so many years later, this adaptation has finally gotten made, and that it’s far better than most of the other very mediocre recent animated films have been.  This isn’t anywhere as good as the great Bruce Timm/Paul Dini collaborations from years ago, but it’s a solidly entertaining story with good characters and interesting conflict.  The voice cast is great, and the animation is solid if not spectacular.  The film has an adult edge, but it avoids the worst of the juvenile cursing-and-sex masquerading as “sophisticated” elements of the recent DC animated films.  I liked it quite a bit.

The film makes a LOT of changes to the original story, in order to fit it into the continuity of these new DC animated films.  But I was impressed by how faithfully the film stayed to the major beats of the original story.  Most of the best moments from the original story find their way into the movie somehow.  The Judas Contract, as collected in trade paperback form, begins with Nightwing’s discovery that every other member of the team has been incapacitated and kidnapped, and his gradual realization that Terra did the deed.  Of course, Terra had been a character in the book for about a year beforehand, so the series had taken plenty of time to develop her character and build to this shocking twist.  This animated film has to chronicle Terra’s whole journey in this one short movie (she appeared briefly in a mid-credits tease at the end of Justice League vs. Teen Titans, but that’s it), and so that sequence of Terra’s betrayal of the team (though, as she points out in both versions, it’s not really a betrayal if she was never on their side to begin with) is moved to much later in the film, almost an hour into it.  But the filmmakers still cleverly allow this sequence to play out much the way it did in the comics, with Nightwing being the only member of the team to escape the original assault, and his gradual discovery of what happened to every other member of the team.  As the film had progressed, I’d started to wonder if this all-ages animated film would follow through on the events of the original story, but sure enough Terra’s betrayal did come and the moment worked great.

The film also didn’t pull its punches in regards to other controversial aspects of the original story.  Terra’s final fate plays out almost exactly the way it did in the comics, thank goodness.  Here too I’d been worried the filmmakers would back away from the original somber ending, but they went right for it.  The brief moment in which Gar, digging through the rubble, uncovers Terra’s face is one of the only true emotional moments that this often-disappointing recent series of DC animated films has been able to hit.  The moment worked perfectly.

I was also impressed that they did not shy away from the original story’s off-putting suggestion of a sexual relationship between the older Deathstroke and the teenaged Terra.  It’s unpleasant and disgusting, but that’s the point.  While this film does make one change in making clear that the two have not actually had sex (whereas it’s strongly implied in the original comic that they have), the glimpses we get of Terra in her nightie trying to flirt with Deathstroke are uncomfortable enough and perfectly carry through the ideas from the original storylines.  (As opposed to the terrible animated adaptation of The Killing Joke, which took some of the uncomfortable sexual politics of the original comic and made them much worse, this adaptation was able to find a way to take some of these intentionally off-putting aspects of the original story and adapt them in a way that works for this different medium and time.)

I was pleased that this story involved Nightwing as a central character (he’d only made a brief appearance in Justice League vs. Teen Titans) since Dick Grayson was such a major player in the original story.  Sean Maher has been playing Dick Grayson in the recent DC animated films, and he’s always been great, but he really shines in the role here as one of the main protagonists of the story.  Kari Wahlgren is great as Starfire, and I liked the way Starfire was presented in this film.  This is an easy character to get wrong.  She still has the voluptuous look from the original comics, but she is presented correctly as intelligent and brave and loyal, not a bimbo.  I was also glad the film incorporated the idea of a romantic relationship between Dick Grayson and Starfire, seeing as that was a core idea of the original New Teen Titans comic book.

Taissa Farmiga is, again, absolutely perfect as Raven, and Stuart Allan, Brandon Soo Hoo, and Jake T. Austin do solid work as the other Titans Robin, Blue Beetle, and Beast Boy.  (Why is he called Beast Boy here, when the character made such a point in the original New Teen Titans comics of calling himself Changeling, not Beast Boy which was his original code name?)

Christina Ricci plays Terra, and she is spectacular in the role.  This is a character with a lot of shades to play, and Ms. Ricci hits every single note perfectly.  The character works in the story because of Ms. Ricci’s performance.  The late, great Miguel Ferrer is equally perfect as Deathstroke.  (Mr. Ferrer replaces Thomas Gibson, who played the character in his previous appearance in Son of Batman, and this is a major step up.)  Mr. Ferrer brings Deathstroke such gravitas and strength with his performance.  He avoids the mistake of turning the character into a scenery-chewing villain.  Deathstroke is a professional above all, and Mr. Ferrer nails that aspect of the character.  These two guest voices really help make the film.

* I enjoyed the prologue featuring an earlier version of the Titans.  I loved the touch of using Starfire’s original costume from the comics.  Though I was confused as to why Gar (Beast Boy) seemed to have not aged a day in the five years between the prologue and the main film.

* I liked the version of Nightwing’s costume seen in the film, with the red on black (as opposed to the more standard blue).

* I also liked the way the story was able to incorporate Brother Blood, Mother Mayhem, and also the H.I.V.E. into the story, since they were all such major elements of this era of the Wolfman/Perez New Teen Titans.

* I love Kevin Smith, but I think his cameo at the end of the film was a mistake.  I love seeing Kevin Smith involved in these films, but a comedic moment inserted into the somber ending didn’t work for me.

* For the most part the animation in this film is decent, and I enjoyed many of the character designs.  The look of Raven, Blue Beetle, and Robin are great, and as I mentioned above I really liked this version of Nightwing.  These recent films have often made their female heroes too busty, but for Starfire it works since that is faithful to George Perez’s original design.  The current artists for these DC animated films seem to have a problem with adult male faces, which is in evidence here when we see Nightwing and Deathstroke without their masks.  But the design is not a huge problem the way it’s been in these other recent animated films.

* It looked to me like the design of the character used as Brother Blood’s test subject was intended to resemble Jericho (a Titans hero introduced during the original Judas Contract storyline), and I was pleased that a brief mid-credits sequence proved me right.  I did miss Donna Troy, though.  I understand that she doesn’t work for the current DC Universe continuity, but she was a great character and a major part of the original Titans team.

* Speaking of current DC Universe continuity, it’s interesting to me that this current series of animated films are based so strongly on the revamped “New 52” continuity, which has already been mostly erased/reversed by the current “Rebirth” initiative in the DC comics.  Some of the most major aspects of the “New 52” era, which have been reflected in these recent animated films, such as the younger Superman and the Superman-Wonder Woman romantic relationship, have already been done away with in the comics.  I am curious to see how future DC animated films reflect those changes to the main comic-book universe.

As I have written about quite a lot here on the site, I have a huge fondness for Bruce Timm’s DC animated universe from the nineties and the aughts, but I have been mostly disappointed by the past few years worth of animated films, which have mostly ranged from mediocre to terrible.  However, Justice League Dark was a step in the right direction, and Teen Titans: The Judas Contract is pretty solid.  The next film features the involvement of Bruce Timm and seems to go back to the wonderful look of Mr. Timm’s later Batman: The Animated Series designs (when the series was called The New Batman/Superman Adventures), so I am looking forward to that!