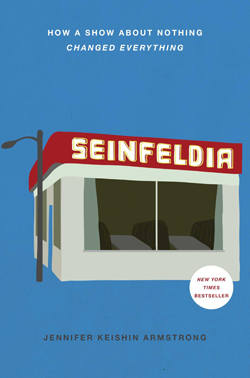 My love for Seinfeld is deep and vast.  I started watching around the time of the show’s fourth season, back in 1992/93.  I remember being told that I absolutely had to watch “The Contest.”  I liked it, and by the end of that season I was watching regularly.  I think it was the fifth season episode “The Marine Biologist” that made me a fan of the show for life.  I can remember, like it was yesterday, that moment at the end in which George whips that golf ball out of his pocket.  (Kramer: “Is that a Titleist?”)  I don’t think I had ever before laughed so long or so hard at anything I had seen on TV.  Circa 1995, my friends and I started watching and/or taping the daily Seinfeld reruns at 11:00 PM, which allowed me to catch up on all the earlier episodes.  It was at this point, watching and re-watching those old episodes over and over again, that my Seinfeld love inched towards obsession, and I quickly grew well-versed in the minutia of the show.  I watched regularly until the end, and I have enjoyed regularly diving back into the show over the years.  When the DVDs were released, between 2004-2007, I enjoyed doing a complete re-watch of the show from start to finish.  So, yeah, I am a fan.

Jennifer Keishin Armstrong’s new book, Seinfeldia: How a Show About Nothing Changed Everything, tells the story of the show.  The book begins with a look back at the life and careers, to that point, of Jerry Seinfeld and Larry David, and their fateful conversation in a Korean deli in 1988 in which they hatched the idea that would become Seinfeld.  We read about everything that went into creating the pilot episode, and the sporadic early episode orders from NBC that gradually led to the order for a complete, twenty-two episode third season in 1991.  Ms. Armstrong’s book moves through all nine Seinfeld seasons, right up to the controversial finale.  Along the way, we stop for spotlights on various members of the supporting cast and also the production team, in particular a variety of the show’s writers.  The final chapters follow the main Seinfeld players through their post-Seinfeld years, including Michael Richards’ unfortunate racist outburst and the cast’s reunion on Larry David’s Curb Your Enthusiasm.

Seinfeldia is an enjoyable read, but it’s not nearly as in-depth as I had hoped.  Reading this so soon after The Daily Show (The Book), I found that Seinfeldia suffered significantly in comparison.  I loved the oral history format used in The Daily Show (The Book), and I wish a similar format had been used here.  It doesn’t appear to me that Ms. Armstrong conducted nearly as many new interviews as Chris Smith did for his Daily Show book, which results in Seinfeldia’s feeling less than comprehensive.  And Ms. Armstrong’s summaries of the interviews she did conduct felt too boiled down to me, too over-simplified.  I would have vastly preferred hearing more detail directly from the mouths of the men and women involved in the creation and production of Seinfeld.  That’s what I loved so much about the “oral history” format of The Daily Show (The Book).

There’s a lot of ground covered in Seinfeldia, don’t get me wrong.  But the book sits in an unfortunate middle ground between being aimed at the Seinfeld super-fan or the casual viewer.  I doubt a casual viewer will pick up a book like this.  But for a super-fan, there wasn’t nearly enough new information or new stories contained in the book.  It was fun to read the book and remember the highlights of the show, but I’d have enjoyed the book a lot more had I felt that I was getting new insights and reading new stories and new perspectives on the show.  The show’s DVD release contained a wonderful series of in-depth documentaries and behind-the-scenes making-of featurettes and commentary tracks that are just as informative, if not more so, than this book, and a lot more fun to watch.

My favorite aspect of the book was the spotlight on many of the show’s writers.  I enjoyed getting to read about these writers, their various paths to getting on the show, and their struggles and successes and failures in writing for the show.

My least favorite aspect of the book was Ms. Armstrong’s repeated use of the term Seinfeldia as a way of summing up the world of the show.  Something about it just felt silly and childish to me.  And as the book went on and Ms. Armstrong used increasingly flowerly language to describe her concept of Seinfeldia, my eyes rolled.  “Time had little meaning in Seinfeldia” (pg. 52).  She referred to “Seinfeldia’s founding father and namesake” (pg. 10) and described Kenny Kramer as “the first person who could pass freely from real life into Seinfeldia and back again” (pg. 23).  Eventually she describes Seinfeldia as “a third dimension,” explaining: “There was reality; there was television; and there was Seinfeldia, where elements of both commingled, passed through… this was a feeling, a place, another world…” (pg. 108).  Urgh.

If you’re a fan of Seinfeld, there is certainly a lot of enjoyment to be had from reading this book.  I just wish I could recommend it more highly.  A more in-depth retelling of the show’s history, with more extensive new interviews and new perspectives and insights from the show’s major and minor players, both in front of and behind the camera, would have been more enticing to a Seinfeld super-fan like myself.