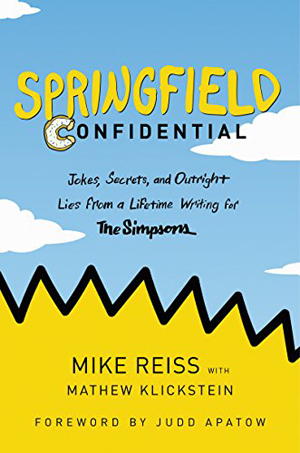 Mike Reiss has been one of the key creative voices behind The Simpsons since almost the beginning.  Along with his writing partner Al Jean, he was a part of the now-legendary original Simpsons writers room assembled by Sam Simon.  Mr. Reiss and Mr. Jean stepped into the role of show-runner for The Simpsons seasons three and four, two years that represent a creative high-point for the show. (No joke, these two seasons are nearly flawless, filled with gems such as “Homer at the Bat,” Black Widower,” “Burns Verkaufen der Kraftwerk,” “Flaming Moe’s,” “A Streetcar Named Marge,” “Homer the Heretic” (which might be my all-time favorite Simpsons episode), “Mr. Plow,” “Marge vs. the Monorail,” and so many more!!)

Mr. Reiss’s new book, co-written by Mathew Klickstein, is a memoir of his life, with a strong focus on The Simpsons.  The book is called Springfield Confidential: Jokes, Secrets, and Outright Lies from a Lifetime Writing for The Simpsons.  It’s a fun read for hard-core Simpsons fans as well as newbies.

Mr. Reiss and Mr. Jean left The Simpsons after season 4 to create and run their own show, The Critic, starring Jon Lovitz.  (That show’s failure, first at ABC and then at FOX, seems to have been more due to politics among network executives more than a critical or commercial failure of the show itself.  That’s certainly Mr. Reiss’ story, as described amusingly (and somewhat heartbreakingly!) in the chapter of this book devoted to The Critic, but it’s a story I have heard and read backed up by Jon Lovitz, James L. Brooks, and others in many other interviews and articles over the years.)

In the intervening years, Mr. Reiss and Mr. Jean would return sporadically to The Simpsons, writing terrific episodes such as “The Springfield Files” (which is the very funny X-Files crossover episode) and “Simpsoncalifragilisticexpiala(Annoyed Grunt)cious” (the Mary Poppins episode which is an all-time classic).  The pair went their separate ways when, for season thirteen, Al Jean returned to his role of showrunner on The Simpsons (a position which he has, incredibly, held for almost two decades, until this day).  Mr. Reiss, meanwhile, has gone on to create the show Queer Duck and write for the Ice Age films. He has written plays and seventeen children’s books, including How Murray Saved Christmas. He also co-wrote The Simpsons Movie (as part of the all-star group of current and former Simpsons writers assembled by James L. Brooks) and has served as a part-time consultant and producer for The Simpsons.  (Mr. Reiss describes in his book his working about one day a week for The Simpsons.  I believe this continues to this day, though I’m not certain.)

Springfield Confidential is a brisk, fun read.  Mr. Reiss (assisted by Mr. Klickstein) writes in a fun, breezy, conversational style.  (I believe segments of this book have been lifted from the lectures that Mr. Reiss has been traveling around delivering over the years.)  The book is funny and lighthearted.

Mr. Reiss dwells at length on The Simpsons, as is proper, since clearly most fans are picking up this book to read about The Simpsons.  (No disrespect to Mr. Reiss’ other projects, but I think that’s just the plain simple fact — one supported by the book’s title and cover, which focus on The Simpsons.)  Mr. Reiss describes the development of the show as well as the day-to-day process of writing it (I enjoyed his summary of a day in the life of the show), and he periodically interrupts the book’s narrative to answer a variety of “burning questions” he’s frequently been asked by fans of the show.

If I have one criticism of the book, it’s that it’s a bit more superficial than I’d expected from someone so intimately involved with the show.  I understand that Mr. Reiss and the publisher probably wanted to take care to make a book that wouldn’t be too impenetrable to anyone not a Simpsons super-fan.  But I suspect that the vast majority of people who would actually buy and read this book already know all of the basic stories about the show’s origin, as well as the basics of how the show is made.  The parts of the book that I most enjoyed were when Mr. Reiss dug into the details of specific aspects of the creation of the show.  One of the funniest passages in the book is when Mr. Reiss is describing his philosophy that there is always “the right joke for the moment,” and it’s the task of the writer to find it.  As an example, he describes the Simpsons writers’ hard work finding a funny name for a family franchise restaurant for a scene in an episode.  He gives us a number of their suggested names that the writers came up with (parodies of TGI Friday’s such as Too Bad it’s Monday’s or Thank Allah its Ramadan… or versions of old-times, cutesy names like the Old Spaghetti Factory such as The Corndog Conglomerate or The Lasagna Limited Holding Corporation) before they arrived at the perfect joke: The Texas Cheesecake Depository.  Not only was I laughing out loud reading all of those very funny fake-restaurant names, but I was fascinated by that glimpse into the process.  I wish there’d been more deep-dive material like that, rather than superficial information such as that the voices are recorded before the animation is done (something which I can’t imagine any Simpsons fan doesn’t already know).

(For a far more in-depth look at the making of and history of The Simpsons, I recommend John Ortved’s The Simpsons: And Uncensored, Unauthorized History.  That book is an interesting oral history of the show.  Mr. Reiss’ book avoids any of the juicy drama that provides a lot of interesting reading in Mr. Ortved’s book.  Mr. Reiss does spend a few pages describing the conflict between Matt Groening and Sam Simon in the early years of the show, before stating: “There you have it: the one dark secret of our show, the lone bruise on the Simpsons banana.  That’s all the gossip I’ve got.”  While Mr. Ortved’s book is probably a little too interested in gossip, I would have liked Mr. Reiss to have gotten into more detail of how “the sausage gets made” behind the scenes of The Simpsons, stories which I am sure would have involved a little conflict, even if Mr. Reiss is being honest in describing The Simpsons as a show where people generally get along well.)

Despite this one large criticism, I quite enjoyed this book and it’s an easy recommendations for any Simpsons fans out there.  It’s great to read about the show straight from the mouth/pen/keyboard/whatever of one of the show’s important creative voices.  There’s no doubt that Mr. Reiss was a major player in the show’s becoming as great as it was back in those early, golden years, and it’s enjoyable to read his stories and to get his perspective.