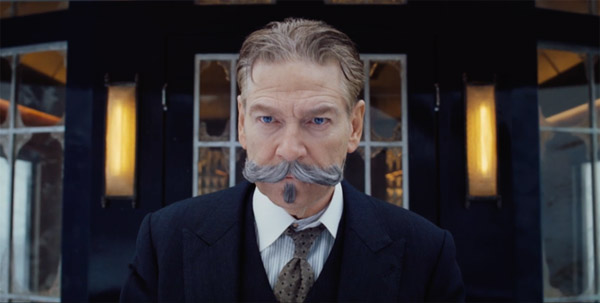 Murder on the Orient Express, directed by Kenneth Branagh, is the latest film adaptation of Agatha Christie’s 1934 novel.  Mr. Branagh also stars as detective Hercule Poirot, who finds himself enmeshed in a complicated murder mystery while traveling from Istanbul to London on board the titular Orient Express.  When the criminal Samuel Ratchett is killed, there appear to be a plethora of suspects on board the high-class train, and the finicky detective Poirot must sort through the clues to find the killer.

I have been a fan of Kenneth Branagh, as both an actor and a director, ever since Dead Again.  Mr. Branagh might not be the most showy or edgy of directors, but I have usually found his films to be solidly entertaining, and Murder on the Orient Express is no exception.  The film is a joyful little puzzle from beginning to end.  This is not terribly innovative or boundary-pushing cinema, but it’s comfortably enjoyable like a favorite cushy chair.  Many of the beats of the film feel familiar — not only is this the fourth adaptation of Agatha Christie’s novel, but much about the story has been imitated by other films — but Mr. Branagh manages to keep things feeling fresh.  I feel like maybe I am damning Mr. Branagh with faint praise, and I don’t mean to.  With his steady hand at the helm, he has assembled an endearingly fun spin on Ms. Christie’s most-famous story.

Perhaps Mr. Branagh’s greatest achievement in the film is the way he is able to wrangle the film’s large, and very famous, cast.  The cast is extraordinary: Olivia Colman, Penelope Cruz, Willem Dafoe, Judi Dench, Johnny Depp, Josh Gad, Derek Jacobi, Leslie Odom Jr., Michelle Pfeiffer, Daisy Ridley, and several other talented supporting players.  Almost any of these movie stars could have been the lead of their own film.  I have seen many other movies sink under the weight of so many stars.  Yet Mr. Branagh was able to balance all of these actors and their characters beautifully.  This could have easily felt like a film without any real characters, just Hollywood stars hobnobbing.  However, Mr. Branagh was able to achieve the benefit of casting all of these talented performers; since most of the film’s ensemble of characters have only a few scenes that spotlight them, these actors’ movie-star charisma is able to, in most cases, flesh out a full character despite their limited screen-time.

It’s great to see Michelle Pfeiffer given such a meaty role to play, and Ms. Pfeiffer is terrific.  She doesn’t appear in many films these days; it’s nice to see that she’s still got it.  Judi Dench can play haughty arrogance like nobody’s business, and I loved seeing Willem Dafoe put on a German accent; as always, Mr. Dafoe is a joy to watch.  Daisy Ridley was impressive in The Force Awakens, and it’s nice to see her playing a normal human character here.  She’s great.  I am pleased to see that, without all the trappings of a humongous Star Wars films, she clearly has strong acting chops.  Josh Gad is always fun, and he brings some life to the weasily Hector, who worked for Ratchett until Ratchett’s murder.  Speaking of whom, while I once thought Johnny Depp was a great actor, over the past several years I have become rather bored of Mr. Depp’s increasingly more outlandish, caricatured performances.  He tones things way down here and actually, almost, sort of seems like a human being again.  He’s not my favorite character in the piece, but he’s not nearly as annoying as I’d feared.

There are a few characters who the film seems to forget to pay attention to.  Manuel Garcia-Rulfo plays Biniamino Marquez, an Italian man who many of the passengers at first blame for the crime; and yet, the film never really tells us much about who he is and what his story is.  I also wish I had a better handle, after having seen the film, on the violent but silent Count Andrenyi, played by Sergei Polunin — what’s this guy’s deal; why is he so angry all the time?  If the film explained it, I missed it.  So these feel like holes, but considering the tonnage of characters the film has to juggle, it’s not shocking that a few of the train’s passengers were pushed more into the background.

Mr. Branagh himself is a lot of fun as the fastidious Poirot.  I worried at first that there would not be an actual performance underneath that ridiculous moustache, but thankfully, Mr. Branagh is able to give much life and soul to the famous detective.  I appreciated that Mr. Branagh emphasized Poirot’s sense of humor in addition to his incredible detective skills.  Mr. Branagh the director applied that ethos to the entire film; although this is a murder mystery with life-and-death stakes, much of the film unfolds like a playful romp.  This could have failed spectacularly, but I was impressed by how much fun Mr. Branagh was able to make his film, while still maintaining the stakes.  (That shot of Poirot’s evening moustache-guard shows that this is not a film that takes itself too seriously.)

I won’t discuss the film’s ending in much detail.  Suffice to say that, yes, it is implausible, in the way that, frankly, the solutions to most murder mysteries are, in my opinion.  And yet, it works, and I left the theatre feeling satisfied and not scratching my head.

Of course, the film does leave some questions.  Most notably: who was the person who missed the train, who Poirot replaced?  I would have expected to have seen, in the film, how that person’s absence would have affected the perpetrators’ unfolding plan, and yet the film ignores what to me feels like that huge issue.  I would have also have liked to have gotten a little more understanding of Ratchett.  Why did he kidnap that child?  What were his intentions, and what exactly went wrong?  Since that was the primary instigating action for much of the film’s story, I would have liked for that to have been clarified a bit more.

The film’s ending grinningly sets up the sequel, which I was pleased to learn has already been green-lit.  I would happily return to spend a little more time with Poirot and, hopefully, a new group of movie-star murder-suspects.