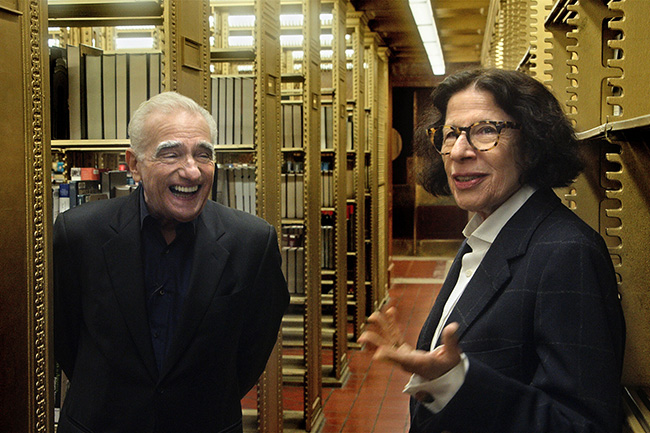 I am head over heels evangelical about the Netflix documentary series Pretend It’s a City.  Stop reading now and go watch it!

OK, do you need a little more information?  The series is seven half-hour episodes, in which Martin Scorsese chats with his friend, author Fran Lebowitz, about life.  More specifically, life in New York City.

I must admit that while of course I knew the name Fran Lebowitz, I was not tremendously familiar with her or her work before watching this series.  But by the end of the first episode I had fallen in love with this sharp-written, fast-talking, opinionated woman.  I couldn’t stop watching this show and I wound up watching all seven episodes within 24 hours.

The series has a very loose structure; basically Martin Scorsese winds up Ms. Lebowitz on a topic and then lets her go.  The series is a love letter to her and her opinions on, well, everything.  It’s also a wonderful love-letter to New York City and everyone crazy enough to live there (despite Ms. Lebowitz’s frequent complaints about her fellow New Yorkers.  The series’ title comes from her very funny exhortation to people who don’t pay attention when walking around the city to “pretend it’s a city!!” and look where you’re going!).  (The love for New York City pouring out of Ms. Lebowitz and this series reminded me of the equally wonderful HBO series How To with John Wilson.)

The series gives a little background information on Ms. Lebowitz and her work and career.  There are some fun clips of Ms. Lebowitz being interviewed over the years; I particularly enjoyed the snippets of her appearances on David Letterman’s show.  But for the most part, the series is a spotlight on Ms. Lebowitz today and her many opinions.  The series jumps around from an extended conversation with Mr. Scorsese in a restaurant with various other appearances and Q&A sessions, as well as Ms. Lebowitz being interviewed by other celebrities including Alex Baldwin, Spike Lee, and Olivia Wilde.  All of which basically serve as an opportunity for Ms. Lebowitz to give us her very funny opinions on a variety of subjects.

As joyous as it is to listen to Ms. Lebowitz hold forth on a variety of topics, it’s almost equally joyous to listen to Mr. Scorsese laugh at her comments.  It tickles me to see the friendship between these two.  (Apparently Ms. Lebowitz got her start writing reviews of bad movies for Andy Warhol’s Interview magazine.  I can see why these two are friends!)

I had a ball watching this series.  I wish there was more!