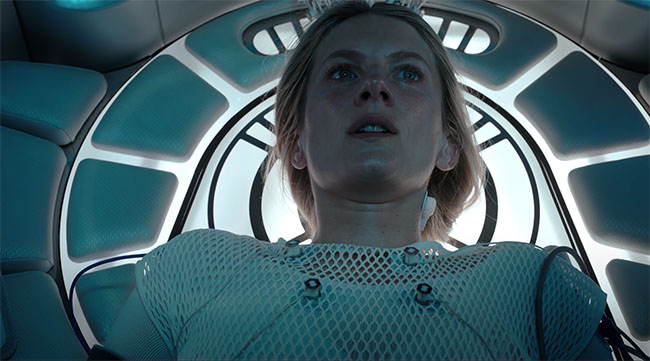 In the film Oxygen (available to view on Netflix), Mélanie Laurent plays the main character (whose name we don’t at first know), who wakes up trapped in some sort of futuristic medical pod.  She doesn’t know who she is or how she got there.  The pod has an A.I. called M.I.L.O. (Medical Interface Liaison Officer) with whom she can communicate, but she doesn’t seem to have the needed authority or codes to order M.I.L.O. to unlock the pod and release her.  But she does know that the oxygen within the pod is rapidly running out…

I really enjoyed this film!!  It’s a tour de force performance by Mélanie Laurent (Inglourious Basterds), who is basically the only human being we see on screen for the entire film.  Not only is she the only person on screen, but she’s basically trapped lying down inside this sci-fi apparatus of the medical pod.  It’s an extraordinary performance, electric and gripping and completely compelling.

I always love original sci-fi stories, and I was impressed by the way director Alexandre Aja and screenwriter Christie LeBlanc were able to create a great sci-fi premise.  I love the way the film is structured as a mystery, with Ms. Laurent’s character and the audience gradually putting together the pieces of the puzzle.  At the same time, it’s also a race-against-the-clock thriller as the oxygen in her medical pod slowly dwindles away.

Every now and then a great film comes along that basically only has a single character on screen.  (I’m thinking about films like Locke, starring Tom Hardy, or All is Lost, starring Robert Redford.)  Those sort of cinematic live-wire acts are always exciting for me, because there are so many ways they could go wrong and become a dull slog.  But I found Oxygen to be thrilling.  The great script was supported by skilled directing and editing that keeps the film tense and exciting and never boring, despite our basically watching one mostly immobile woman lying in a tube for an hour and a half.  It’s all driven by Mélanie Laurent’s riveting performance.  She commands the screen, and the viewer’s attention, with the power and emotional truth of her performance, despite the wild sci-fi set-up.

And, wait, did I mention the film is subtitled?  Yet another potential obstacle to an exciting thriller!  Yes, Oxygen is a French-language film.  (Note: when I started watching it on Netflix, the film defaulted to an English dub.  It was weird and distracting to me.  A few minutes in I realized what was happening and switched over to the original French language track, with English subtitles, and I vastly preferred that.)

I also want to make note of the film’s haunting & beautiful musical score, by the French musician ROB.  This is a key element in the film’s success.  I also quite enjoyed the work of Mathieu Amalric (Quantum of Solace, Munich, The Grand Budapest Hotel) as the voice of M.I.L.O.

Oxygen is a winner.  I won’t tell you any more.  If you’re interested in an original sci-fi yarn, give this a watch.