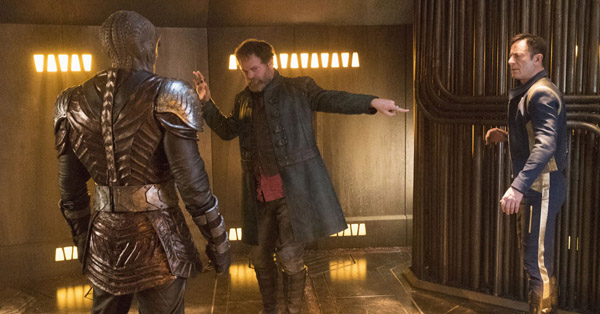 In Star Trek: Discovery episode 5, “Choose Your Pain,” Burnham becomes convinced that the “Tartigrade” creature that is the key to Discovery‘s fantastic new drive system is suffering each time the drive is used.  She wants the Discovery to stop using the system until they can figure out a way to use it without harming the creature, but with Captain Lorca kidnapped by the Klingons, the drive is essential to the Discovery crew’s being able to mount a rescue.

Egad, I really want to like this show, and there is a lot in “Choose Your Pain” that I enjoyed.  But the show is continually limited by plot problems up the wazoo and its almost mind-boggling disregard for Trek continuity.

What’s good?  The central premise of this episode, in which our heroes discover that their fantastic new invention might be harming a sentient creature, and yet that invention is critical to their being able to rescue their captain, is a perfect Star Trek sort of premise.  So too is the idea of a crew falling into conflict without their captain, and eventually being forced to put aside their differences to find a way to save the day.  (Echoes of “The Tholian Web.”)  These are classic Star Trek ideas, and yet given a slightly different spin with these new situations with the Tartigrade and the Klingons.  I liked all of that.

There was a lot of great character stuff in this episode.  Once again all the interactions between Saru and Burnham was great.  These are two great characters and the conflict between them feels real and interesting. I am really enjoying getting to know Lt. Stemets more, and this episode gave him a good spotlight as we saw him wrestle with the moral issue of the possibility that his invention is harming the Tartigrade.  I liked that the Doctor, Culber, got some good scenes this week, and I liked that the episode finally confirmed that he and Lt. Stemets are in a relationship.  This is Star Trek’s first major canonical gay couple, and so far I have loved the non-sensational way in which this couple has been presented to us.

Also: I loved getting to see the show’s version of a 23rd century toothbrush!

Seriously, that scene of Stemets and Culber getting ready for bed was great; this is the type of below-decks stuff that we’ve never seen before in Star Trek, and I am enjoying when Discovery allows us to see what goes on onboard a starship when the main command crew is not on the bridge.  I’d like to see more of this.

As I wrote last week, I hated Ensign Tilly when she was first introduced, but she is starting to grow on me, and I laughed at her delivery of the first f-bomb in Star Trek history.  That was a fun moment.

Rainn Wilson was solid as Harcourt Fenton Mudd.  I liked the way he played the charcater, showing us Mudd’s deviousness and a hint of that twinkle in his eye, while still taking the character seriously.  It’s hard to believe that the pudgy, jovial scoundrel we met in the Original Series was tortured for months by the Klingons but… well… five episodes in it is clear that this show doesn’t give a hoot for Trek continuity.  More on this in a moment.

Let’s start with Captain Lorca, a character I am beginning to detest.  I am trying to understand this character, and to tell myself that this is an interesting new character filled with shades of grey, and that he’s not doing anything different than Captain Sisko did on Deep Space Nine during the latter years of the Dominion War, when Sisko was eager to win the war at all cost.  There were moments in this episode that seemed like attempts to humanize Lorca, which I appreciated.  The first came in the second scene with the female Admiral, with just the two of them in the room when Lorca briefly dropped his bluster and sort of kind of acted like a human being for two seconds (before turning quickly back into an asshole accusing his friend the Admiral of being jealous of his “power”, whatever that means).  Then there is the revelation of how Lorca got his eye injury, when his former ship was destroyed by the Klingons and his crew was lost.  The idea that the reason he has stubbornly refused to get his eyes fixed is to remember that loss is sad and human.  But the revelation that he destroyed his ship, killing most of his crew, to prevent their being captured by the Klingons, is monstrous.  And we are not given any sort of defense to Mudd’s accusation that Lorca basically ran away, allowing his crew to die.  How exactly did the captain survive, all alone, when the rest of his crew all died on his ship?  What explanation is there other than his being a selfish coward… who then became a cold-blooded murderer when he destroyed his own ship to prevent his crew from being captured.   Maybe there are more revelations to come in future episodes, but right now Lorca looks pretty horrible.  How in the world did this guy get given command of another starship, let alone one as apparently critical yo the war effort as Discovery?

Forget all of this backstory, though, just look at how Lorca acts in the present day.  He scoffs at the Admiralty, arrogantly assuming he knows more than they do and talking about his power.  He refers to the new character of Lt. Tyler, the young Starfleet prisoner of war, as a soldier.  Not an engineer, not an explorer, a soldier.  It’s a small moment, but indicative that Lorca doesn’t behave or think the way I think a Starfleet captain should.  But the most damaging moment comes when Lorca decides to leave Mudd, a Federation citizen, to suffer who knows what fate at the hands of the Klingons.  No matter what Mudd might have done to deserve that, can you imagine Kirk, Spock, or McCoy leaving Mudd to be tortured by the Klingons?  Madness.

While at first I was glad that the Starfleet characters on this new show were acting like proper Starfleet characters (during the Shenzhou scenes in the premiere episode), that seems to have mostly fallen away.  (Is this a consequence of original show-runner Bryan Singer’s departure?)  This has become my biggest criticism of the show.  How on earth could someone like Lorca have been given command of a Federation starship?  Why is Burnham, for a while, the only one on the Discovery who seems to care that a sentient creature might be getting tortured by their experimental new drive system?  Despite all that had gone down between Saru and Burnham, it pained me to see Saru, as a former science officer and current first officer, completely ignore Burnham’s concerns.  This is not how a Starfleet officer should act.  (Note that I am NOT in favor of the opinions espoused by Gene Roddenberry later in his life that there should NEVER be conflict between Starfleet officers.  In classic Trek there were always conflicts, and I am OK with that.  As an example, as I wrote above, I love the conflict the show has built between Saru and Burnham. But despite that conflict, it seemed unforgivable to me that an officer of Saru’s standing wouldn’t even consider Burnham’s concerns about the suffering of the Tartigrade.)  (And in terms of a plot problem, I don’t understand why Burnham doesn’t present any scientific evidence to Saru to support her concerns, in that scene when she first approaches Saru.  We know she DOES have that evidence, because she shows it to Stamets two minutes later!!)

Beyond those issues, the show’s continuity woes seem to only be getting worse.  Truly, I am trying to put my concerns about continuity aside and enjoy this show for what it is.  But the show keeps rubbing my face in its disregard for continuity.

When Lorca is kidnapped by a Klingon vessel, we hear the computer clearly identify that ship as a Klingon D-7.  Come on. I am a Star Trek fan and I know what a Klingon D-7 looks like.  (It is the iconic Klingon ship from the original series.  Click here.)  That misshapen monstrosity we see on screen is NOT a D-7.  It’s bad enough that Discovery is using Klingons who look nothing like any Klingon we’ve ever seen before, and showing us Klingon ships that look nothing like any Klingon ship we’ve ever seen before.  But to then insist on screen that these new, weird-looking Klingon ships are in fact the classic Original Series Klingon D-7s is ridiculous.  I do not understand this.  I truly don’t.  Whoever on the production team who put that D-7 in there must have known what a D-7 is!!  So how did they expect fans to react when what was on screen was not at all a D-7?

And don’t even get me started on those bizarre, un-Klingon-looking shuttles we saw when Lorca escaped.  Oh my.

Other plot problems?  Well, only minutes after the admiralty ordered Discovery to stop using its spore drive and stay out of the action for a while, because they were afraid the Klingons were on to them, Discovery is ordered into Klingon space to rescue Lorca?  It seemed obvious to me this was a trap to lure Discovery out of hiding so the Klingons could capture it.  I felt sure the Admiralty would order Discovery NOT to rescue Lorca; that they would prefer to send any ship OTHER than Discovery after Lorca, in order to protect their new scientific breakthrough!!  But nope.  And also, nope, the Klingons weren’t smart enough to try to trap Discovery when Lorca’s crew, predictably, came after him for the rescue.  Sigh.  I want the heroes AND the villains on this show to be smart.  Neither seemed to be the case here.

* Oh my lord it was so cliche in that final scene when Culbert asks Stamets for reassurance that he is OK, despite the insanely risky procedure he’d performed on himself.  OF COURSE that meant we’d see two seconds later that Stamets was not, in fact, OK.  I rolled my eyes at that.  BUT I did enjoy the creepy mirror effect that the episode closed with.  I don’t know what that means, but it was a cool moment.

* Is the Klingon woman who ran the torture ship the same Klingon woman who we saw last week flirting with the albino Voq?  Does that mean that Tyler is a spy?  Last week that Klingon woman told Voq she’d bring him to her mistresses and that he’d have to give up everything.  Is Tyler Voq??  Did he have to give up his Klingon-ness (despite his main slogan being “remain Klingon”) to become a human-looking spy like Arme Darvin in “The Trouble with Tribbles”??

* I loved seeing the Mempa sector (an important location in the Klingon civil war story-line on Star Trek: The Next Generation) on the map.  Less exciting were the very obvious names that appeared on Saru’s requested list of the best Starfleet captains.  Nice idea, but when the fan-service is so obvious it doesn’t work for me.

* I liked Culber’s white and gray medical version of the Discovery uniform a lot!  I like it a lot more than the blue and gold regular version.  It’s like a cooler-looking version of the uniform style from Star Trek: The Motion Picture.

Overall I would say this was a more successful episode than episodes 3 or 4.  But I am frustrated by the continuity problems and, more than that, by the basic character and narrative problems.  As always, I hope for the best and look forward to next week’s episode…