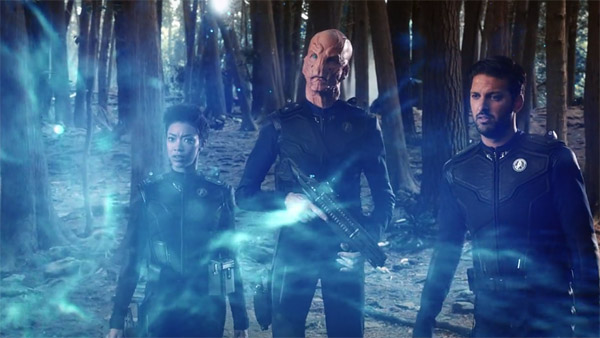 In Star Trek: Discovery episode eight, “Si Vis Pacem, Para Bellum,” Burnham, Saru, and Tyler investigate an alien planet with a unique rock formation that Starfleet believes can be turned into a giant antenna to detect cloaked Klingon ships and help Starfleet win the war.  But the planet turns out to be not quite as uninhabited as the Discovery crew had initially thought…

“Si Vis Pacem, Para Bellum” is a solid episode.  Discovery seems to have settled into a nice groove.  This is not the show I wanted it to be, and each episode continues to be weighed down by narrative inconsistencies that I wish weren’t there, but the characters are interesting, the show is visually gorgeous, and these episodes are entertaining.

It’s nice to see the Discovery crew get to leave the ship and investigate a strange new alien world.  Coming after last week’s time travel episode, I’m pleased to see the show embrace these classic sorts of sci-fi stories.

(On the other hand, part of me wishes that Discovery would lean more in the other direction and forget about these standard types of Star Trek stories.  If this is truly intended to be a different sort of Star Trek series, then maybe they should more strongly resist the urge to give us these familiar time-travel and away-team-investigates-a-mysterious-new-planet types of stories.  For a show that was advertised as being about seeing the Federation at war, we have seen shockingly little of the Klingon-Federation conflict in the series following the two-part premiere.)

But that being said, there was a thrill in getting to see Brunham, Saru, and Tyler investigate a new alien planet, which was gorgeously realized by the show’s visual effects team.  We’ve never gotten to see televised Star Trek executed on this scale before, and I loved the way the show brought to life this beautiful alien planet (and its inhabitants).

It was clear from the first episode that Saru was going to be a standout character on Discovery.  He’s been in the background for the past few episodes, so I was delighted to see him step back into focus in this episode.  The way the events on the planet explore the nature of his character, and how he has lived his whole life in constant fear, was lovely.  It was also fun to learn more about his physicality.  In this episode we see that Saru is super-strong (look how he crushed those communicators in his hands!) and super-fast (we hadn’t ever really seen his feet before!).  It’s interesting to give this fear-filled character such super-human abilities.  I hope this duality is explored further in future episodes.

It was nice to get to see a glimpse of Klingon-versus-Federation fighting in this episode, our first in a while.  I love the way the Discovery’s bridge design and huge viewscreen makes it look as if the Discovery’s bridge officers are truly in the middle of the action.  That is very cool.  Also, while I continue to despise Captain Lorca (which I think is intentional on the part of the show, but I’m not certain about that), it’s interesting to see this militaristic officer direct his crew during combat.  This is something new for Trek. And I liked the way they humanized the conflict, showing us the loss of the U.S.S. Gagarin with all hands.

However, this sequence crystalized something I’d been feeling since the premiere, which is that I don’t like the way Discovery visualizes these starship action sequences.  These visual effects shots are just not very impactful.  The starship combat sequences seen in the later seasons of Deep Space Nine were way more viscerally thrilling, even though those shots were created with far more primitive visual effects.  So what is going wrong here?  I can pinpoint several areas: 1) The Klingon starship design is just terrible, so when we see those ships in action, they don’t have the menacing effect they should have.  2) The majority of the shots seem to be wide shots, keeping all of the starships very small in the frame.  While it’s cool to see wide-shots of a big starship battle from time to time, I think having the majority of these shots look like that decreases the drama, and doesn’t give these massive starships the weight that they should have.  These are huge starships, but they don’t ever really “feel” huge in these sequences.  3) The phaser/laser effects strike me as a little too “Pew! Pew! Pew!” silly — something about the combination of the look of the visual effects and the sound effects just isn’t quite working for me.  Am I over-analyzing?  Probably!  But sequences of space-combat like the one seen this week should be thrilling, and this one didn’t rise to that level for me.

While I very much liked the episode’s main story on this mysterious planet, Pahvo, the Klingon stuff — once again — didn’t work nearly as well.  I love in theory that this show wants to spend time with the “villains” so as to humanize them and show us their perspective, rather than their just being faceless evil bad guys.  But in execution, at this point it’s time to admit that this stuff just isn’t working.  At first I liked the idea that we’d get to see Klingons actually speaking Klingon, rather than English, but the Klingon cast haven’t been able to get over the hump of their prosthetics combined with this made-up language to be able to bring the level of emotion and nuance to these scenes that they need.  Also, the show hasn’t given us enough explanation about what the heck is actually going on to allow us to engage in these scenes and invest with these characters.  Is the female interrogator L’Rell supposed to be a sympathetic character?  Is she genuinely hoping to defect because of the horrible way that she, and the other followers of T’Kuvma, have been treated by the other Klingons?  Or is this all a long con?  My suspicion is the latter — as I have written before, it seems likely to me that Tyler is a Klingon spy, possibly the albino Loq himself in disguise.  I think the show is trying to keep that a secret, which is having the unfortunate result of not only preventing me from engaging with the burgeoning Tyler-Burnham relationship (because I don’t think Tyler’s emotions are real), and also preventing me from understanding any of what is going on during the Klingon scenes.  I think that the show doesn’t want us to know exactly what’s going on because they want the Loq/Tyler reveal to be a surprise, but the without my being clear on what any of these Klingon characters truly want or are trying to do, the scenes with them are meaningless.  It’s a shame, because the L’Rell/Cornwell scenes were the first Klingon scenes in a long while that had started to get interesting, as I was intrigued by the idea of these two strong female characters forming some sort of alliance.  But what happened at the end?  Did L’Rell kill Admiral Cornwell?  If so, was that what she was intending to do?  Not only don’t I know, but I don’t even know what the show WANTS us to know or think at this point, and that feels to me like a major failure of storytelling.

* I am loving the many bizarre titles given to Discovery episodes, and this week’s is another winner.  “If you want peace, prepare for war” feels like a concise summary of Captain Lorca’s viewpoint.  The only thing that strikes me as off is that, while this episode title feels very appropriate for Discovery as a whole, it didn’t seem to have too much relevance to the actual events of this week’s episode…

* I liked the idea of the planet Pahvo having a “music.”  The distinct, alien sounds of alien planets is not something Star Trek has ever really explored before.

* Tyler says that he wants to hurt the Klingons that hurt him.  If Tyler is really Loq, that sentiment still fits perfectly.

* I thought it was a little silly that, at first, the Discovery crew thought that huge antennae had been formed naturally.  Also, how exactly could a transmitter on one planet, no matter how large, help detect cloaked Klingon vessels across all of Federation territory??  In local space, sure, but the Federation is VAST.  That didn’t really track for me.

* It was nice to see Kristen Beyer as the author of this episode.  Ms. Beyer is a terrific author of Star Trek novels (including the still-ongoing Voyager relaunch series, which has miraculously gotten me interested in characters from Voyager, my least favorite of all the Trek series), so it’s cool to see her involved with Discovery.

I was a little late on this review, sorry about that!  I’ll be back soon with my thoughts on Discovery’s mid-season finale!