Skip to the content
HomeWritten PostJosh Reviews the Star Trek: Discovery Mid-Season Finale: “Into The Forest I Go” 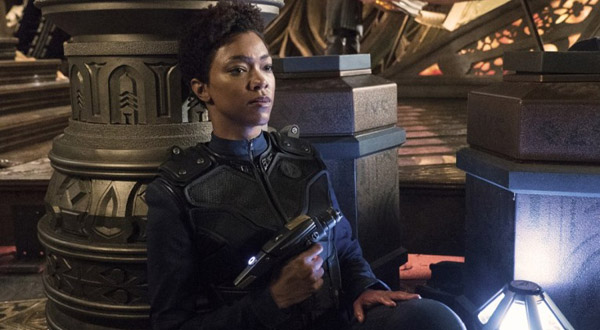 Josh Reviews the Star Trek: Discovery Mid-Season Finale: “Into The Forest I Go”

The first batch of Star Trek: Discovery episodes came to a close with the mid-season finale, episode nine, “Into the Forest I Go.”  The Klingon “Ship of the Dead” arrives at Pahvo, and Burnham and Tyler sneak aboard in an attempt to locate critical information required to allow Federation starships to penetrate the Klingon cloaking device.  As part of the plan, Stamets is pushed to the breaking point, utilizing the Discovery’s Spore Drive to execute 130 jumps in short succession.

As has been consistently the case with Discovery so far, there is a lot to like in this episode and also a lot that is incredibly frustrating.

Let’s start with the good.  The character stuff between Burnham and Tyler is terrific.  The tender scene between the two of them on the couch in Tyler’s quarters, in which he haltingly finds his way to admit the way he was tortured and sexually abused by the Klingons, is touching and tender.  It’s interesting to see the show embrace this aspect of Tyler’s back-story that had been suggested but not explicitly stated unto this point.

(Of course, that tender scene — which tells us everything we needed to know without getting too explicit with the details — is soon after followed by Tyler’s nightmare-flashback which gives us the Klingon nudity that no one was asking for.  So much for subtlety.  Also, as I have been writing for several weeks now, it’s hard to engage in the Tyler-Burnham relationship when it’s been clear that Tyler is the Klingon Loq in disguise, so none of this was genuine.  This episode suggests that Tyler/Loq is a sleeper agent who doesn’t remember being Loq.  I wish the show had laid its cards in the table and allowed us to follow Loq/Tyler’s story as it unfolded, rather than trying to keep all this as a surprise.  Had I known all along that Tyler really did believe himself to be a human prisoner of war, I would have engaged more deeply with that tragic story, as opposed to doubting every scene that the character was in because I believed him to be Loq telling lies.)

It’s nice to see the Klingon-Discovery stories intersect for the first time since the two-part premiere, and we get some nice Discovery-Klingon combat (both of the outer space and Mekleth variety).  The production values of this show continue to be extraordinary.  It’s great to see Star Trek looking so well-produced on TV!!  The sets are fantastic, and the visual effects are terrific.  There are some particularly gorgeous visual effects shots this week.  My favorite is the scene when you see Kol and the other Klingons on their bridge, while through the huge window/viewscreen the approaching Discovery slowly comes into focus.

Lt. Stamets continues to be one of my very favorite characters on the show, and he shines once again in this episode, as he is forced to push himself far beyond what is safe in order to execute the multiple jumps needed for the plan to defeat the Klingons.  And I was thrilled to see he and Culber engage in Trek’s first on-screen man-to-man kiss.  It’s about time.

For several exciting moments in this episode, Lorca actually behaves like a Starfleet captain: speaking up passionately about defending the Pahvans; showing a protective instinct towards Burnham; rallying the bridge crew before the fight, giving Stamets the encouragement he needs to undertake the near-impossible multiple jumps, and professing excitement for ending the war and getting back to the Discovery’s true mission.  It almost makes you forget the previous eight episodes.  Oh, and then Lorca clearly sabotages that last jump home and he’s back to being evil again.  Oh well.

I was certainly intrigued by the scene in Lorca’s quarters in which he reveals that he believes that the Spore Drive has given him the potential to unlock the secret of parallel universes.  Is the show teasing us with the notion that all of Discovery’s continuity problems are the result of this show’s taking place in an alternate universe from the main Star Trek timeline?  Is the fan theory that the militaristic Lorca might be from the Alternate “Mirror” Universe true?  (Note that Admiral Cornwell told Lorca in a previous episode that he’d changed — as a result of being replaced by his Mirror Universe counterpart, perhaps?)  I don’t think the show is going in this direction, it feels like too easy an answer, but we’ll see.  (Also, why would the military Lorca be the only one aware if this incredible scientific breakthrough, with Stamets being totally in the dark?)

So what doesn’t work?

Burnham and Tyler have a WAY too easy time sneaking on board the Klingon ship — and onto the Klingon bridge, for heavens sake!  The two sensors they left were ridiculously loud — maybe turn off the audio and blinking lights on these supposedly covert devices?  That was laughable.  I was glad to see Tyler’s PTSD affect the story, but the way he was able to shake it off as soon as he heard that Burnham was in trouble was silly; I don’t think that’s how PTSD really works.  Kol was defeated way too easily; both in how Burnham was able to be a match for him in single combat (which is ludicrous — Kol would not have risen to be the head of his house without his being a master fighter), and in the way that, after all this buildup since the premiere, Discovery was able to destroy the Ship of the Dead so easily.

I hated the narrative sloppiness a few episodes ago of having Cornwell discover how messed up Lorca was and vow to remove him from command (which of course is what Starfleet should have done long ago) only to neglect to contact Starfleet to tell them before going off on her doomed mission to contact the Klingons.  The same stupidity rears its head here, in which we hear at the end of the episode that, for some reason, after going through hell to acquire the secret of the Klingon cloaking device, Discovery has not yet transmitted that information to the rest of Starfleet.  Then there is Stamets’ ridiculous “one last time” use of the Spore Drive.  OF COURSE we know something will go terribly wrong.  This is such over-simplistic, cliche story-telling.  Be smarter, Discovery!!!

After spending so much time building up the Pahvans last week, why do those aliens play zero part in this episode?  (I had been interesting to see how they would attempt to mediate the Klingon-Federation conflict.)  Why is there no follow-up to what Saru went through last week?  (Saru also has almost nothing to do in this week’s episode.)

The show plays Lorca’s speech about how he turned the Discovery’s crew of polite scientists into fierce warriors as a climactic, happy moment, but I was cringing.  That feels like a tragedy, not a celebration!  That is not what Star Trek stands for!  As I have been asking since the beginning about Discovery, is the show playing the long game here?  By the end of the season, will the Discovery crew eventually realize that Lorca is bad, and Star Trek’s traditional positive values will triumph?  Or is this just bad Star Trek storytelling??  Right now it feels like the latter, but we’ll see…

I was a little let down by the cliffhanger.  After the earlier scene mentioning parallel universes, as the music swelled and the camera pulled back from Discovery in that final shot, I thought we’d see something really shocking or surprising, maybe involving time travel or alternate universes… maybe the I.S.S. Enterprise or something like that.  But no, just some debris.  That didn’t really have an impact for me.

I was happy that we finally got to hear the Klingons speaking English, in the extended sequence in which Burnham confronted Kol.  Suddenly here was a Klingon character on the show who was able to put some emotion into his words!  It was nice to see, an illustrates by comparison how still all the previous Klingon scenes have been.  But, of course, the plot device used for this to happen doesn’t work.  We see Burnham use the universal translator to allow her to understand Klingon.  OK, good so far.  Then, in a clever bit of sound design, we hear the echo of the original Klingon words being translated into English.  Very cool.  But then Burnham sets the translator down, and yet she (and we) are somehow still able to hear and understand the Klingons.  That doesn’t really make any sense!  If you’ve gone to the trouble to establish that Burnham can only understand the Klingons by use of the translator in her communicator, you can’t then have her discard that communicator and still understand the Klingons!

Stamets and Culber’s on-screen kiss was a great Trek milestone.  That Klingon nudity, though, was a milestone I didn’t need.  It felt gratuitous and borderline silly, like Discovery turned into Species there for a minute.

There has been a lot to enjoy in these first nine episodes of Discovery, but also a lot that is hugely frustrating.  As a point of comparison, it is certainly true that when you look at the first nine episodes of all the other Trek series, you see that pretty much every other Trek show struggled at the beginning.  (The Original Series probably has the strongest initial run of episodes of all the various Trek shows.)  But in today’s modern television landscape, and because there was such a long build-up and prep-time for this new Trek series, and also because Discovery has a shorter first-season run than the previous shows, my expectations were higher that this show would be stronger out of the gate.  But I will do my best to keep my mind open as I look forward to the show’s final batch of five episodes, coming in 2018.  I very much hope that they will stick the landing on this first round of stories, and that we will gain a better understanding why this show is set in the prequel era and what it has been building toward. (I hope it has been building towards SOMETHING!!)