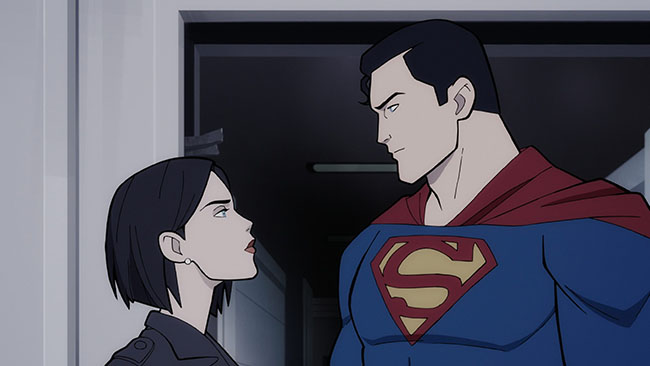 For several years now, ever since The Flashpoint Paradox and Justice League: War, DC/Warner brothers have been producing a series of animated films set in a connected continuity.  As I have written about previously, while I love the idea of a connected series of films, I think these past few years’ worth of films have been mediocre at best.  I haven’t been wowed by the animation or the story-telling (which I found to be, far too often, juvenile and rather dumb).  But that series seems to have come to an end with the previous animated film, Justice League Dark: Apokolips War.  I enjoyed Apokolips War, but I’m very happy for that series to be over and for these animated films to find a new direction.

Not only does Man of Tomorrow appear to start the story over from zero, with a new version of Superman’s arrival in Metropolis, but it is stylistically very different.  The animation style and character designs are completely new.  This is a great choice, and I’m quite taken with this new animation style!  In my mind, the be-all-and-end-all of DC animation is the Bruce Timm style that originated with Batman: The Animated Series.  That’s the one to beat, and, let’s be honest, Man of Tomorrow doesn’t.  But it does represent, in my opinion, an enormous leap forward from the style of animation these DC animated films had been using for the past several years.  The character designs and poses felt much more pleasingly naturalistic to my eyes.  The designs are simple enough that they animate very smoothly.  The thick black outlines around the characters took me a little getting used to, but I think it all worked very well.  I’m impressed!

The story of Superman’s initial arrival to Metropolis has been told many ways and many times, in the comics, in movies, and in various TV shows.  There’s nothing in Man of Tomorrow that feels wildly groundbreaking.  Some of the choices feel sort of random, such as the inclusion of Lobo as a main character.  That felt to me like the producers just wanted to include a popular character who hadn’t been featured in any of the recent animated films, rather than his being there because he makes sense in the story of Superman’s first big adventure.

That being said, the film succeeds in setting up these new versions of Superman, Lois, Ma and Pa Kent, Lex Luthor, etc.  I’d be very happy to see further adventures set in this new continuity, so the film clearly succeeds in its main goal.

The voice cast is strong.  Darren Criss (Glee, The Assassination of Gianni Versace: American Crime Story) is noble and gentle as Superman/Clark Kent.  Alexandra Daddario (the Percy Jackson films, True Detective) has a lot of energy and passion as Lois Lane.  (It’s interesting that the film portrays Lois as a young grad-student, rather than the established reporter she’s usually depicted as when Clark first starts work at the Daily Planet.  I like this choice.  It’s nice to see a different take on Lois, and it’s an interesting new dynamic to see Lois and Clark more as peers at the beginning.  On the other hand, the film’s plot seems to forget that Lois is established at the beginning as a young newbie, because we then see her doing all sorts of things (like getting an interview with the imprisoned Lobo, the first extra-terrestrial captured by the government) that seem like only the world-famous version of Lois could have possibly been able to do.)  I loved the work of Bellamy Young (Scandal) and Neil Flynn (the Janitor on Scrubs) as Ma and Pa Kent.  I loved how Ma and Pa were woven into the story, and I enjoyed seeing these slightly updated versions of the characters that still felt perfectly like how Ma and Pa Kent should be.

Zachary Quinto (Heroes, Spock in the J.J. Abrams Star Trek movies) is terrific as Lex Luthor.  He’s able to convey Lex’s fierce intelligence and also his arrogance and menace.    Ryan Hurst is fantastic as Lobo, full of fun and gruff danger in equal parts.  Ike Amadi brings great dignity to the role of J’onn J’onzz, the Martian Manhunter.  And Brett Dalton (Agents of S.H.I.E.L.D.) does great work and brings a lot of humanity and soul to his portrayal of the unfortunate Rudy Jones, who transforms into the Parasite.  I really liked how the Parasite was handled in this film; in particular, how well they established him as a good guy at the start of the film.  (He seemed like such a good guy that at first I thought he was J’onn J’onzz or maybe Hal Jordan in disguise!)

Some of my favorite moments in the film were the early scenes with young Clark Kent, seeing him struggle with his secret life as a super-powered alien.  That’s a fascinating part of Clark’s story that often gets skipped over in these Superman origin stories!  In particular, I loved the scene of Clark’s getting upset by how negatively aliens were depicted in the sci-fi movies of the time.  That was very clever.

* I liked seeing a new take on Kryptonian tech while still maintaining some of the iconic crystalline structures from the Richard Donner Superman movies.

* I liked the choice of showing Clark try a more generic-looking costume before winding up in his iconic Superman look.  I liked the goggles!

* I wish the big Superman-Lobo fight in the middle of the film didn’t look like it took place in a deserted city.  Also, I wish the film had been clearer about how and why Lobo’s weapon wound up transforming Rudy Jones into the Parasite.  (We got some exposition later, but it would have been more effective for that to have been much clearer in the moment.)

* I objected to some of the nudity in the recent DC animated films, because it felt juvenile to me, rather than actually being adult or sophisticated.  This film also has a few moments of gratuitous nudity, but surprisingly it was male nudity!  We get to see both Superman and Rudy Jones’ butts.  That made me laugh!

* The whole business in the third act with Lex being allowed out of prison to help Superman was incredibly dumb, in my opinion.  That needed a rewrite.  (Just like Lois isn’t yet a world-famous reporter yet in this story, so too no one knows that Superman is a great hero yet!  So why would he be allowed to just walk Lex out of prison??)  Frankly, there are a number of dumb plot points in the third act that weakened the film a little for me.  Why can the Parasite suddenly make itself invisible when it visits its/Rudy’s old home?  After Superman gets Lex out of prison to use his scientific know-how to help re-power him to fight the Parasite, why doesn’t the film actually show Lex doing that before the big final battle?  How did the Parasite get so huge before that final fight and yet somehow remain unnoticed in Metropolis?  Why is the first thing Superman tries, when fighting the now-enormous Parasite, is his heat-vision, when it had already been clearly established that the Parasite absorbs that kind of energy?  Similarly, why would Lobo think blowing himself up would weaken the Parasite, when we know that energy will strengthen it?  Why does film end without telling us what happened to Lex (is he back in prison or on the loose?) or to Rudy’s pregnant wife and child?  Was it an intentional cliffhanger to not answer the question of who put the bounty on Superman’s head (that sent Lobo to Earth originally)?  Finally, one of my favorite aspects of the film was that it had the guts to show the deaths of two major characters… so I was bummed they were both undone before the end.  I wish the third act had been better written with some of those plot points better straightened out.  Oh well.

* On the other hand, I loved that Superman wins the day with an inspirational, heart-felt speech, rather than by fisticuffs!  That was a terrific choice.

There’s nothing Earth-shatteringly original in Superman: Man of Tomorrow.  But it’s an enjoyable story and it holds a lot of promise for what could be a fun new series of connected films.  I’m eager to see what comes next.