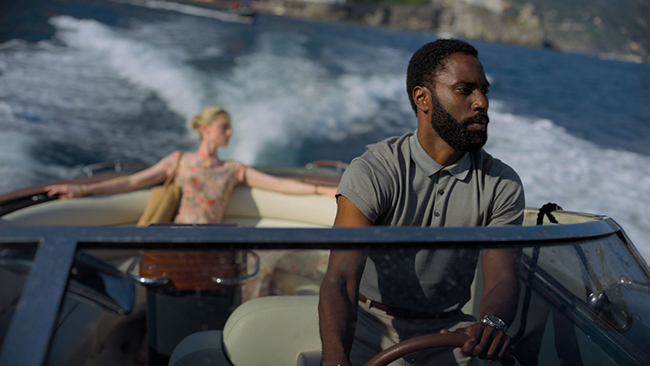 I’ve been a huge Christopher Nolan film ever since watching Memento back in 2000.  I think that Tenet is the first Nolan film since 2002’s Insomnia that I didn’t see on the big screen.  I desperately wanted to, of course, but I didn’t think it wise to go to a theater during the COVID-19 pandemic.  I was sad to miss seeing Tenet in a theater, but I was excited to catch up to it when it was released on streaming.  Sadly, after so much anticipation, I was disappointed by Tenet.  The film is gorgeous to look at, but I found it almost incomprehensible and nearly-impossible to follow.

Mr. Nolan has always impressed me with his mastery of the craft of filmmaking.  He seems to know just how to create beautiful and memorable imagery on screen.  As his career has continued, he’s been working on films of a larger-and-larger scale, and it’s been exciting to see how Mr. Nolan has been able to bring his visions to life in increasingly epic ways.  At the same time, I’ve always loved how playful and creative Mr. Nolan’s stories were with the basic structure of film and its depiction of time.  This was central to the excitement of Memento (in which we followed Leonard Shelby’s story both backwards and forwards), and has woven through many of his subsequent films.

At first, Tenet seemed like a natural extension of these ideas with which Mr. Nolan has been playing for two decades.  In the film, we learn that technology exists to reverse the direction of entropy on an object, or even a human being.  This enables that object or person to move backwards through time.  That’s a cool idea, and once I knew that was the central concept of the film, I immediately assumed that Mr. Nolan would apply that idea to the overall structure of the film as well.  I was excited to see how that would play out.

Many of Mr. Nolan’s films have incorporated mysteries into their structure.  Many of his films hold back key information from the audience until late in the game.  (Again, looking back at Memento, we see that approach to storytelling, as the film withholds certain critical information about Leonard until the very end, which, when revealed, completely changes how we understand all of the events we’d witnessed to that point.)  But, for me, Tenet fails because it holds back so much information that I didn’t have anything to hold onto while watching the film.  Even though the viewer is missing critical information for much of Memento’s run-time, we know enough about what’s going on, and about Leonard himself, to be able to enjoy and follow the film.  (I keep using Memento as an example, but this is true of most of Mr. Nolan’s previous films.)  But here in Tenet, I felt that I, as an audience member, wasn’t given ANYTHING to go on, or to engage with.  I have no idea who the “Protagonist” (played by John David Washington) is.  I don’t know who any of the people he’s working with are.  I know that Kenneth Branagh’s character is bad, but I don’t know anything about what he’s doing or why he’s doing it.  I don’t understand what happened to Mr. Washington’s character after the opening sequence at the Kyiv Opera House.  I don’t understand how he moves from whatever mysterious organization he was working for before/during that sequence (was it the CIA?) to whatever mysterious organization (Tenet?) he gets involved with after.  I don’t understand who Neil (played by Robert Pattinson) is, or how exactly he gets connected with Mr. Washington’s character, or why Mr. Washington’s character seems to trust him in a world in which everyone else seems untrustworthy.

There are lots of cool, exciting things that happen.  That opening hostage sequence in the Kyiv Opera House is incredible!  But I needed a little bit more understanding of who was who and what was happening.  I needed a little more actual character development of the “Protagonist” and Neil, so that I could engage with them as they moved through this crazy adventure.  That John David Washington’s character doesn’t even have a name feels like a symptom of the larger problem I’m describing here.  The “protagonist” never becomes more than a guy we’re watching do some stuff.  He’s never an actual character.  (Now, that’s not to say a character like this couldn’t work.  The unnamed lead character in Layer Cake works, as an example!  Because while the main character played by Daniel Craig was, in some ways, generic and unknowable by design, we did know enough about him to understand the story and the world in which he operates.  We know what he wants and what the obstacles are, and we know what the other characters want.)

What’s really weird to me about Tenet is that I’m not sure how much of this confusion was intentional.  Because a lot of my confusion stems from the infuriating sound mix, in which it is often difficult to impossible to actually hear and understand the characters’ dialogue.  This has been an issue in Mr. Nolan’s films ever since The Dark Knight Rises, and all the controversy over Bane’s mask and the way it muffled all his dialogue.  I remember seeing that first Imax preview of the opening sequence of that film, in which Bane’s dialogue was 100% indecipherable.  After much criticism, Bane’s dialogue was adjusted for the finished film; but it was still often very hard to hear clearly.  This has continued to be a problem (in my opinion) in Mr. Nolan’s films moving forward, particularly in Interstellar.  It reaches an apex here.  If you thought it was hard to hear Bane’s dialogue from behind his mask, welcome to Tenet, in which multiple characters spend half the movie behind masks, and between the muffling effect applied to everything they say, and the way the dialogue is often buried in the sound-mix under the score and foley effects, the result is that I found huge swaths of the film’s dialogue impossible to understand.  (I am not alone in this criticism of the film.)

Am I as an audience member supposed to understand, for example, what happens to the “Protagonist” after the Kyiv Opera House?  Who captures him?  Who rescues him?  Why doesn’t he die after biting into a cyanide capsule?  Why does he then dive in so completely into the weird backwards-time menace he then spends the rest of the film chasing?  Maybe if I could have actually heard and followed more of the dialogue, I’d know the answers.  Did Christopher Nolan not want me, as an audience member, to have that information?  Or is my not having it an accidental result of the film’s sound mix?  I am genuinely uncertain.  But I can say with great certainty that if I’d been able to better follow these key moments of set-up at the start of the film, I have no doubt I’d have had a much easier time following the rest of the film, and that I’d have been much more engaged in the “Protagonist” and his adventure.

I could also dive deeply into the film’s depiction of time, and all the many questions I have.  Here are just a few examples: 1) If a human being with inverted entropy — someone moving backwards in time — needs a special breathing apparatus because oxygen is now moving in the wrong direction through their lungs, then how could they see or hear when moving backwards through time?  Why would light interacting with one’s eyes be different than oxygen interacting with one’s lungs?  2) What was the goal of the future group of bad-people against whom Tenet was fighting?  If Sator’s completing and activating the “algorithm” would destroy the world, then wouldn’t that also destroy those future villains?  So why would they want that?  For that matter, what did the future bad guys want with Sator before he got terminally ill and decided to destroy the world?  What was he doing for them?  3) Aren’t there somehow two versions of Kat at the end of the film?  The one living out her normal day and returning to Sergei’s boat, and the one who confronts and kills Sator?  So do both Kats continue living parallel lives after the end of the film?

I could go on…  Ordinarily, I’d think part of the fun of a film like this would be dissecting the story and thinking about those questions.  But I found the overall story so hard to understand at even a basic level that I didn’t have any energy or desire to dig deeper.   And even on the level of thinking I gave to this film after watching it, I found myself with more and more questions, which was frustrating.

Look, there are lots of amazing sequences in this film.  I’ve mentioned the exciting Kyiv Opera House opening several times.  The mid-movie plane crash is amazing.  I love how globe-trotting the film’s story is.  It’s fun seeing so many beautiful settings captured in gorgeous imagery throughout the film by Mr. Nolan and cinematographer Hoyte van Hoytema.  Certain sequences set on the Amalfi Coast are particularly gorgeous.  The F50 boats we see Sator, Kat, and the “Protagonist” race in are extraordinary, and those sequences were thrilling.

And the cast is high-quality.  John David Washington turned a lot of heads with his great work in Spike Lee’s 2018 film BlacKkKlansman, and he’s the best part of Tenet.  This is a superstar level performance.  Mr. Washington is suave and compelling, and his force of personality shines through the screen.  I wish I was watching this actor play this type of James Bond super-spy in a film whose story I could actually follow!  Robert Pattinson is fun to watch as Neil; I loved his energy and his charisma, but again, I didn’t feel he actually had much of a character to play, and I found myself spending most of my time trying to sort out who Neil was and why he was doing what he was doing, rather than actually engaging with this character and this performance.  I loved Elizabeth Debicki’s work in The Night Manager, and she’s strong here as Kat.  Kenneth Branagh is always fun to watch, but his villainous Sator is rather one-dimensional.  Dimple Kapadia makes quite a meal out of her few but critical scenes as the arms dealer Priya.  It’s a delight to see Michael Caine (a frequent actor in Christopher Nolan’s films) pop up for a scene, even though I had no idea who his character was.  I enjoyed seeing Aaron Taylor-Johnson (Kick-Ass, Avengers: Age of Ultron) as an unnamed military commander though — am I repeating myself? — he didn’t have much of a character to play.

So, while I’m happy to have finally seen Tenet, I’m sorry to report this was a big swing and a miss, in my opinion.