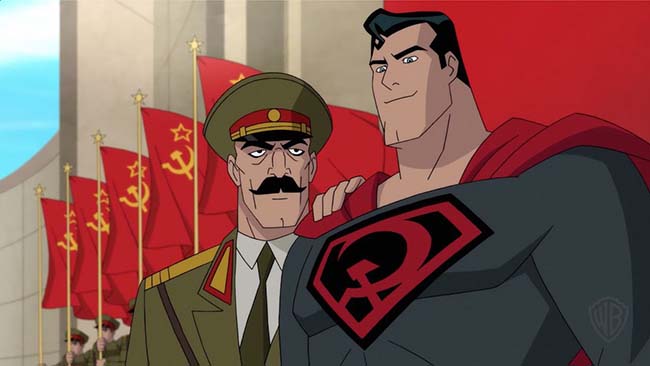 The direct to blu-ray/DVD DC animated film Red Son is an adaptation of the three-issue mini-series by Mark Millar, Dave Johnson and Kilian Plunkett.  That “Elseworlds” story asks the tantalizing premise: what if young Kal-El had been raised in communist Russia rather than in the American mid-west?  (It also has an irresistibly clever title.)  I can see why the team at Warner Brothers Animation decided to adapt this story.  I am pleased that this animated film (scripted by the great J.M. DeMatteis, who wrote some of my favorite comic books back in the eighties and nineties) is an enjoyable adaptation!

The idea of seeing what would happen when the noble Kal-El was raised with very different values than an American farm-boy is a great one, and the film gets a lot of mileage out of that premise.  It’s a lot of fun to see this alternate history of the DC universe play out, and to see the characters interact with real-life figures from history such as Stalin and JFK.  The animation is, as usual for these animated DC films, good albeit not great.  The voice cast is very strong.  Jason Isaacs (Lucius Malfoy in the Harry Potter series, Captain Lorca in Star Trek: Discovery) is fun as this Russian-accented, Communist version of Superman, and Amy Acker (Angel, Alias, The Cabin in the Woods, Much Ado About Nothing) is fantastic as Lois Lane.  Diedrich Bader (Veep, Better Things) is perfectly cast as Lex Luthor; he brings a perfect amount of oily arrogance to Lex.  Phil Morris (Seinfeld, Smallville) is great as Jimmy Olsen — I love seeing a black Jimmy Olsen in this film!!  Singer/songwriter Paul Williams (who also was so great voicing the Penguin back on Batman: The Animated Series) is perfectly obsequious as Brainiac, and it’s a delight to hear Phil LaMarr reprise his role from the animated Justice League show as John Stewart.

The film opens with a cleverly retro, Cold War inspired opening-titles sequence.  I love that the film maintained the period setting of the original comic, and that, like the comic, the story unfolds over many years.  The story beings in 1946 and continues through the following decades.  It’s wild to see Lois Lane smoking in the scenes set in the fifties!  (I’m shocked that this was permitted in a 2020 animated film.)

J.M. DeMatteis added some modern social commentary into the film (that wasn’t so much present in the original comic).  For the most part, it works.  In the first Lois-Superman scene, Superman presents several critiques of the United States that are (intentionally) quite relevant to 2020.  I liked seeing that.  It’s also certainly no accident that Lex’s “Superior Man” (designed to kill the Russian Superman) says “America First”!  It’s a bit on the nose, but I like when this film shows that it has something to say.  (Even more on the nose is when the violent Batman talks about “taking our country back” — but again, it works.)  It’s a cool beat in the film that, in this alternate history, it’s the West thank builds the Berlin Wall; and it’s the communist Superman who destroys it.  (Again, it’s no accident that in this movie the U.S.’s building a wall is presented as an action that a villain would take.)  On the other hand, I was surprised by how the film sometimes slipped into a far more simplistic Russia-bad/American-good mind-set, such as when we see Superman’s discovery of a Russian gulag.  This extended sequence, which wasn’t in the original comic, seems designed to showing that this Communist Superman’s adopted home was hiding horrible crimes, thus establishing that Russia isn’t as noble as Superman thinks it is.  The film’s ending, in which a triumphant U.S. President Lex Luthor declares a “Global United States,” was also unsettling to me in its jingoistic tone.  Was that the filmmakers’ intention?  It doesn’t seem to match the other social commentary present in the adaptation.

Over-all, the adaptation was pleasingly faithful to the source material.  Of course, there were a lot of adjustments.  Some worked better than others.  Superman turned to fascisim earlier in this version, which makes sense for the film, though I liked that the comic waited longer before the Communist Superman took decidedly villainous action.  It was a more subtle turn in the comics; here, Supes murders Stalin with his laser-eyes pretty early on.  One of the most bizarre aspects of the comic was the depiction of Lois Lane married to Lex Luthor, even though he’s clearly established as a psychopath who doesn’t value human life.  I cheered in the film at the added scene of Lois’ leaving Lex after he kills the Bizarro anti-Superman he’d created.  But then the film walks that back and Lois stays married to Lex all through the years, like she did in the comics.  That doesn’t sit well with me.  On the other hand, I like the attention made to Lois in the film, and I liked that Lois was ultimately the one able to make peace between Superman and Lex.  (As I noted above, Amy Acker was terrific as the voice of Lois; I loved Lois in this film!)

The story eventually involves both Batman and Wonder Woman, and I enjoyed seeing these alternate versions of these characters, though I was surprised by some of the choices the filmmakers made.  The film gives us a different intro than the comic to a young Bruce Wayne, and it’s great — I loved the cool moment in which we see a group of bats flying past the boy!  Eventually he grows up into a major antagonist for Superman.  I was a little surprised how the film leaned into the unlikable aspects of this Batman.  In the comic, Batman’s actions felt more defensible to me, pushing back against the super-powered fascistic Superman.  But here, when they have Batman saying things like “take our country back,” it was uncomfortable for me.  And this Batman is a murderer.  (I guess that’s just how DC/Warner Brothers likes their film versions of Batman these days!)  Like Bruce, I at first quite liked this different version of Wonder Woman.  I like how in this version, Diana rejects a romantic relationship with Superman because she is a lesbian; it was nice to see a version of this character be so up-front and comfortable with her LGBTQ identity.  On the other hand, the adaptation really went over-the-top in the scene in which Wonder Woman is bound and dominated by Batman (who battles and defeats her because at the time she was an ally of his enemy, Superman).  I think those scenes are a bit much here in 2020.  On the other hand, I like how the film makes clear, in the final battle, that Diana is not only Superman’s physical equal, but his moral superior — she sees that his actions are wrong far before he does.

There’s some great action.  I love the Superman-Bizarro fight.  (I like how slowly Lex’s “Superior Man” turns into Bizarro).  I liked the cool look of Brainiac’s ship and Superman’s great mid-movie tussle with Brainiac, though I thought the CGI was poorly integrated into the rest of the character animation.  I liked the Superman versus Green Lantern battle at the end.

I was bummed that the final scenes from the comic, which take place in the far future and feature a brilliant plot-twist based on Jor-El’s name, weren’t included in the film!  On the one hand, the film’s ending makes perfect sense as a good place to end the story.  But on the other hand, I adore those zany but genius final pages of the original comic!  Oh well.

I also absolutely loved the Phantom Stranger short films included as a special-feature on the Red Son blu-ray!  I love that the latest DC animated films have been including these extra “Showcase” short films.  I loved this one.  I was surprised by the adult tone; there are some pretty sexy outfits on display, and we see characters smoking a joint!  I liked the seventies vibe to the whole thing.  Very cool.