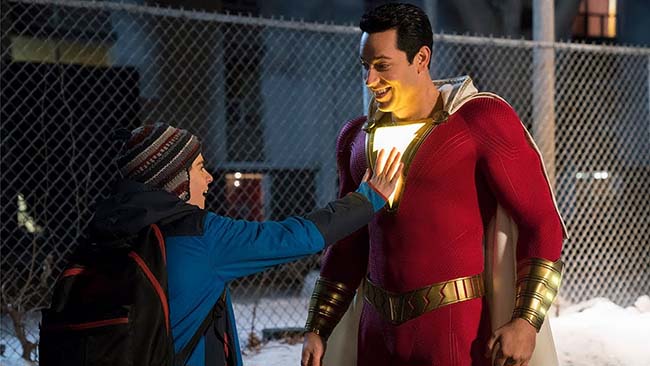 I missed Shazam! when it was released to theatres last year.  I’d been burned out on one bad DC/Warner Brothers live-action movie after another, and while this one looked interesting, I didn’t rush out to see it.  I recently watched the film on blu-ray, and I enjoyed it!

Shazam! tells the story of young Billy Batson, an orphan who has gotten himself booted from one foster family after another.  As a sort of last chance, he is adopted into a group home run by Victor and Rosa Vasquez, with five other orphans.  Billy doesn’t expect to find this new home any more satisfactory than any of his previous ones, but his life takes an unexpected path when he finds himself gifted with incredible powers — and an adult, super-powered new body — by the wizard Shazam.

The idea of a super-hero version of Big is a delicious concept, and this film mines a lot of joy and comedy out of that premise.  My favorite scenes of the film are the ones in which Billy, now in the role of the grown-up super-hero Shazam, and his new step-brother Freddy goof around exploring all the crazy new things this new body can do.  Zachary Levi plays the adult/super-hero version of Billy, and he is spectacular in the way he channels the excitement and enthusiasm of a 14-year-old boy in these incredible circumstances.  I’ve always enjoyed Mr. Levy’s work.  (He was great in season two of The Marvelous Mrs. Maisel.)  But he has perhaps never been more perfectly suited for a role than this one.  Mr. Levi (ably assisted by an awesome-looking super-suit) certainly has the physicality for the role… and his comedic timing is impeccable.  He is so funny and joyous in this role!  His enthusiasm carries the film.

There are two main weaknesses of the film for me.  The main one is that I don’t understand why this movie, telling the story of a kid-turned-superhero, is rated PG-13.  My 10-year-old children were excited to see this movie, and I was excited to watch it with them.  But I found myself wincing at the film’s language and adult-oriented content.  Shazam/Captain Marvel has had a reputation, over the years, as being silly/cheesy/kiddie, so I suppose the filmmakers were concerned about their movie coming off of as being just for kids.  They clearly wanted to make certain people knew this was a “cool” movie aimed at adults.  I can understand that, but I think they overshot the mark somewhat.  I am all for not dumbing-down one’s super-hero movie.  But I think it’s a shame that there’s a lot that’s inappropriate (in my opinion) for younger viewers in the film.  I wish they’d made this suitable for all ages.

The film’s other main weakness is that it’s too long.  This movie didn’t need to be 132 minutes.  I particularly found myself ready for the film to end during the extended final battle sequence.  Far too many of the modern DC/Warner Brothers movies have ended with CGI characters punching one another.  I know, that’s a complaint that could be levied against a lot of super-hero films.  But there’s a way to create fun, clever, interesting super-hero action scenes… and then there are the final battles in Man of Steel, Batman v. Superman, and Wonder Woman.  Blech.  The final battle here in Shazam! is actually a lot better than those films.  It’s just that I felt the film was basically over, and the villain defeated, as soon as the entire adult Shazam family materialized.  But we then had a LOT more fighting to get through, and it was a bit too much for me.

But let’s not focus on the bad stuff.  I really enjoyed Shazam!  I was particularly impressed with how great all the kids were.  Asher Angel is terrific in the lead role of the 14 year-old Billy Batson.  He seems effortless in his ability to play both the dramatic and comedic aspects of the role.  I was very impressed.  Jack Dylan Grazer was terrific in It, where he played Eddie Kaspbrak, and he’s just as great here as Freddy Freeman.  Billy doesn’t know anything about the world of comic-books and super-heroes, but Freddy is a super-hero fanatic, and so he takes it upon himself to mentor his new super-hero buddy.  Mr. Grazer is very funny.  Grace Fulton plays Mary, the eldest of Billy’s new adoptive siblings.  She doesn’t have a huge role, but Ms. Fulton makes the most of her scenes, clearly establishing Mary, despite her limited screen time.  Faithe Herman plays Darla, the youngest child in the Vasquez home, and she is exactly as adorable as she is supposed to be.  Ian Chen plays Eugene, and Jovan Armand plays Pedro, the other two kids in the group home.  They don’t have much to do in the film, but they’re great with what they have.  This film wouldn’t work if we didn’t love all of these kids.  I’m impressed by the very strong young cast they assembled.

The adults aren’t half bad either!  Mark Strong plays the villainous Dr. Sivana, and no one can play a villain quite like the great, intense Mr. Strong.  I’ve loved him in many prior super-hero films (including Kick-Ass and Green Lantern).  He’s great here as Sivana, all icy arrogance.  I do long, though, for Mr. Strong to one day be given a more nuanced, leveled role in one of these types of films.  He could really crush it.  Djimon Hounsou (Amistad, Gladiator, Guardians of the Galaxy, Aquaman) plays the wizard Shazam, and Mr. Hounsou brings great dignity and strength to this small but important role.  Marta Milans and Cooper Andrews play Rosa and Victor Vasquez, and they both succeed at playing genuine and loving without coming off as sappy or annoying.  Well done.  I was also delighted to see John Glover, so memorable as Lionel Luthor for many years on Smallville, pop up here as another super-villain dad: the father of Mark Strong’s Dr. Sivana.  Mr. Glover can play an arrogant jerk like almost no one else.

Visually the film is strong.  I complimented Shazam’s great super-suit, above, and I meant it.  This costume could have looked silly, but they did a terrific job in being incredibly faithful to the classic Shazam/Captain Marvel look, while also creating a costume that looked believable and cool on screen.  I’m impressed.  (A lot of credit also has to go to how Zachary Levi wore the suit, giving it a reality and bringing the whole look to life.)  There’s some great super-hero action in the film, and it all looks great.

(The film’s one big special effects fumble, for me, was the look of the seven deadly sins.  These demons had cool designs — but the decision not to actually animate their faces when they moved and spoke came off looking very cheap and cheesy to my eyes.  That was a disappointment.)

Is Shazam! one of the better super-hero films of the past few years?  Well… no.  For me, the film doesn’t hold a candle to so many of the Marvel Studios films, which I have loved (and continue to love) so much.  But coming in with no major expectations, I was very pleasantly surprised by how much I enjoyed this film!  It was very well-done.  I’m sure they’re working on a sequel, and I’m looking forward to that!