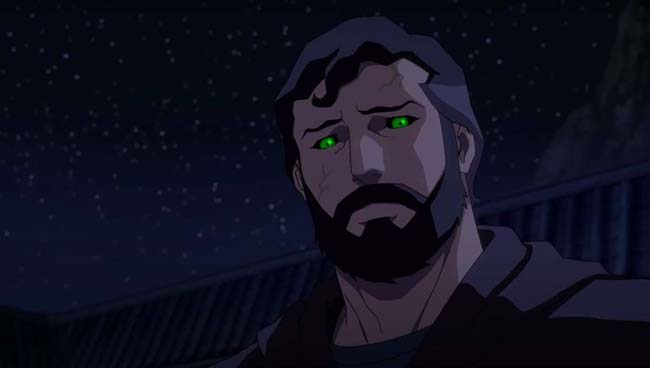 Justice League Dark: Apokolips War seems to be the finale of the “New 52” style continuity of animated films that began with 2014’s Justice League: War.  Here in Apokolips War, the story circles back around to Darkseid (who was the main villain in Justice League: War — his attack on Earth is what led to the formation of the Justice League in that story).  Superman has decided to finally take the battle to Darkseid, and leads the Justice League in an attack on Darkseid’s home planet of Apokolips.  The attack fails, and in response, Darkseid attacks Earth again and slaughters most of the DC universe heroes.  A crippled Superman teams up with John Constantine and a motley crew of other unlikely heroes in a desperate attempt to retake the Earth and defeat Darkseid once and for all.

I quite enjoyed Apokolips War — far more than I’d been expecting to!

While in general I love the idea of a continuity between these DC animated films — I am a huge fan of long-form story-telling in any media, from novels to comic books to TV shows to movies — I have not been a huge fan of this series.  There have been some fun stories here and there, and I have loved seeing the connections between the films.  But overall, I think the tone of these films has been off — they’ve tried to be “mature” and “adult” (and many have been rated PG-13, even R), but I’ve found the sex and cursing in the films to be pretty juvenile.  True adult storytelling would be complex themes and characters, but there hasn’t been nearly enough of that to suit me.  The animation has been OK but not great, and I have not been a fan of the character-designs (which, in my opinion, have given us some very weird-looking characters).

So I haven’t loved this series nearly as much as I’d hoped I would when it started… but if Apokolips War is indeed the grand finale, it is a very satisfying conclusion.  Even when judged purely as a stand-alone adventure, there’s a lot here to enjoy.

It was fun to see so many different characters incorporated into this adventure.  In addition to the entire Justice League, we also get to see all of the members of the Teen Titans as well as the Justice League “Dark”, the loose band of supernatural heroes including John Constantine. Zatanna, and others.  (This movie was given the Justice League Dark heading in its title, which is a curious choice.  John Constantine is the central character, but if this is indeed the finale of this animated movie series, I was surprised they didn’t use the more general Justice League heading.  There must be some marketing reason for this choice.)  The film even incorporated the Suicide Squad!  I loved the efforts to incorporate all of these characters, and to weave in lots of nods to the previous stories.  I liked hearing the Flash refer to Flashpoint (the time-changing adventure that launched the “New 52” continuity in DC comic books in 2011 and also launched this animated continuity).  I liked that the relationship between Damian (Robin) and Raven (of the Teen Titans) was an important part of this story.  I liked seeing the League of Shadows again (which tied into Damian’s origin) and also Ace the Bat-Hound!  I loved seeing Orchid and the House of Mystery again.  I loved seeing Batwoman, Batgirl, and Batwing in the final battle.  I loved seeing Swamp Thing play an important part at the end.

Whereas I have criticized these movies’ tendency to be juvenile with their vision of “mature” content, the dark and grim tone of Apokolips War was well-suited for the film’s subject matter.  This is a story about the Justice League losing, and losing badly, at Darkseid’s hands.  It’s fitting that this should be dark; even so, I was surprised by how dark this film gets at times.  They didn’t hold back in depicting the devastation across Earth following Darkseid’s attack.  It’s wild seeing the Justice League’s “Watchtower” home base space station crashed in London.  (I liked that Constantine has been hiding out inside the smashed Big Ben.)

There is a LOT of violence in this film!  The flashbacks depicting the bloody massacre of the heroes was quite something to see, and the later images of the bloody corpses of the Teen Titans was also quite shocking.  During the big final action sequence, a character gets shot in the head.  I was not expecting that!  Batgirl, Superboy, and Shazam all meet horrible deaths; Jon Stewart is reduced to ash — the film really digs in and goes there!  This is dark stuff.  It all mostly works.  I still think they were occasionally a little juvenile in their apparent need to keep showing more and more bloody violence.  Some of this might have been more effective had it been more suggested rather than being shown front-and-center in all its bloody gory.  But they decided to tell a very dark story, and I don’t complain about the visuals matching that.

No surprise, the aspects of the story that most interested me were the character stuff.  For example, there’s a great and surprising scene, late in the film, in which Raven admits to Damian that she’s contemplated suicide.  This is grim stuff for an animated superhero film, but I liked seeing an adult complexity and richness to the characters.  I wanted more of this.

As usual for these animated films, the voice cast was strong.  Matt Ryan has played John Constantine, amazingly, through multiple different live-action and animated series, and he’s terrific.  Jerry O’Connell and Rebecca Romijn are great as Superman and Lois Lane.  I also quite liked Christopher Gorham as the Flash and Camilla Luddington as Zatanna.

* I enjoyed seeing the relationship that had developed between John Constantine and Zatanna.

* I have often been critical of the over-use of time jumps in genre stories these days.  It blew my mind back when Battlestar Galactica did it, but it’s subsequently been overused.  Still, the two-year time-jump in this film effectively surprised me, and it worked well in allowing the events of this story to have weight and consequence.

* I liked the look of the Kryptonite-infected Superman.  That was very creepy and effective.

* I also liked seeing Batman sitting in the Moebius Chair, and I liked the cool image of Luthor having to report to the huge red hologram of the evil Batman.

* The revelation of Luthor as Lex’s mole was very predictable.  It would have been better not to have seen him aligned with the Justice League at the beginning, so we wouldn’t have suspected that maybe he was one of the good guys in this story.

* The film had an enormous action climax that I thought was very well-done.  It was huge in scale, featuring scores of characters in multiple locations.  I liked the complexity and tension.  And, wowsers, they kept outdoing themselves with the bloody violence as one hero after another met a grisly end.

* The ending was somewhat weird.  It’s as if they were admitting that this entire “New 52” animated universe, that began with The Flashpoint Paradox, was a mistake.  Many fans would agree, but it’s still weird to see the film basically come out and say that!

If this is indeed the end of this film series, this is a very satisfying conclusion.  I am perfectly happy to see this particular experiment in an animated continuity come to and end.  I’d be excited to see another try at this idea.  I certainly think the decades-long continuity of Bruce Timm’s many DC animated series (stretching from Batman: The Animated Series through Superman, Batman Beyond, Justice League, and Justice League: Unlimited) was spectacular.  I’d also be OK with their sticking to stand-alone adaptations of famous stories from the comics for a while.  Either way, I am curious to see what comes next for these direct-to-blu-ray/DVD animated series.