Skip to the content
HomeWritten PostJosh Reviews The Irishman 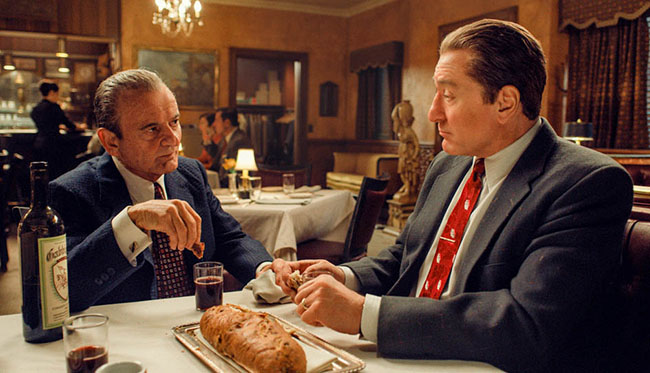 Martin Scorsese’s Netflix film The Irishman is a thrilling delight, demonstrating that Mr. Scorsese continues to work at the absolute top of his game.  You may think that Mr. Scorsese had said everything that needed to be said about crime and gangsters in his earlier films such as Goodfellas and Casino, but The Irishman gripped me from the first frame to the last.  The film is three and a half hours in length, which one might think is indulgent.  Perhaps it is!  But I enjoyed every minute of those three and a half hours and would gladly have watched a few hours more.

The Irishman is based on the book I Heard You Paint Houses, by Charles Brandt, which tells the story of Frank “The Irishman” Sheeran, who was a hitman for the Bufalino crime family.  (Although Mr. Scorsese’s film adaptation has only been referred to as The Irishman in its promotional materials, I was intrigued to see the actual film also included the subtitle I Heard You Paint Houses at the beginning.)  The facts of Mr. Sheeran’s claims in Mr. Brandt’s book have been disputed.  The film presents Frank’s version of the story.  Is this the truth?  I don’t know.  But it’s a hell of a story!

One of the best aspects of The Irishman is the way it finally brings Robert De Niro and Al Pacino together.  The two were both in The Godfather Part II, but they never shared a scene.  Michael Mann’s Heat teased a De Niro and Pacino team-up, though the two men only actually had one scene together.  (It’s probably the best scene in the movie.)  I never saw 2008’s Righteous Kill, and from what I’ve read and heard, that’s probably for the best.  Here in The Irishman, we get a true De Niro-Pacino team-up.  The two men are together for a huge chunk of the middle of the movie, and their pairing is every bit as exciting as I’d hoped.  Both men are terrific.  Mr. De Niro’s Frank Sheeran is an eager-to-please yes-man who, at the same time, is capable to enormous casual brutality.  Mr. Pacino’s Jimmy Hoffa is a charismatic fast-talker who is tough and nails and unwilling to compromise.  The film takes its time in painting the origins of the fast friendship between the two men, as well as the eventual breaking of that friendship.

The key third player in the film is Joe Pesci.  Mr. Pesci hasn’t been in a new film in years, but, wow, he was every bit as great as DeNiro and Pacino… maybe even better!  Mr. Pesci plays Russell Bufalino, the powerful head of a mafia crime family who takes a shine for De Niro’s Frank.  Mr. Pesci is fantastic.  He doesn’t utilize any of the histrionics for which he was well known in many of his earlier roles.  His Russell is never anything short of quiet and well-mannered.  Mr. Pesci plays the role with a twinkle in his eye that gives Russell a likability and a good humor.  And yet, we can always see the danger that lies behind those eyes.  It’s a magnificent role, and Mr. Pesci makes quite a meal of it.

The supporting cast is extraordinary.  Ray Romano is fantastic as the lawyer Bill Bufalino; the always-dependable Bobby Cannavale is fun and menacing as Felix Ditullio; Harvey Keitel doesn’t have too much to do as Angelo Bruno, but he sells his few scenes with gusto; Anna Paquin has a small but critical role as Frank’s daughter Peggy, and she is able to convey a world of emotion with very little dialogue.  Jesse Plemons (Breaking Bad) is fun to see as Jimmy Hoffa’s foster son Chuckie.  I also want to note that Bo Dietl is an absolute riot in a few scenes as a Chicago racketeer.  Many other familiar faces flesh out the world of the film.

I loved the film’s interwoven structure of flashbacks within flashbacks, as we follow Frank and the other characters across many decades of their lives.  I was very impressed with the CGI and makeup effects used to age and de-age Mr. De Niro, Mr. Pesci, and others.  For the most part, that work was seamless!  There were a few moments in which the young versions of Mr. DeNiro and Mr. Pesci moved with a bit more of the slowness I would expect of men their actual age as opposed to the younger guys they were supposed to me in those scenes, but that’s a relatively minor complaint.  Even in those few moments where the visual effects trickery doesn’t quiet work, I admired the film’s ambition in telling this broad story.

I love Steve Zaillian’s work as a screenwriter.  He wrote Schindler’s List, Mission: Impossible, Hannibal, Gangs of New York, American Gangster, Moneyball, and more.  Mr. Zaillian writes compelling characters, but more than that, he has a great eye for telling stories with a vast scope.  Although The Irishman spans many decades and contains scores of characters, Mr. Zaillian was able to keep the movie focused, and I was never confused about who was who or what was going on.  And I love how he and Mr. Scorsese were able to patiently build the details of this world, showing us in great detail how the Buffalinos, and Hoffa, and Frank all operated.  I loved that world-building.  It contributes to the film’s long run-time.  Some have said the film is too long, but I loved the way we were allowed to revel in those details.  It makes everything feel real, which also makes the horror of what we’re watching more powerful.

I’ve read a bit of complaining on-line that the film’s last half-hour drags, but I loved that last half-hour!  Those final sequences were critical to the film, in my opinion.  We need to see the fall-out of Frank’s violent life.  We need to see how he is suffering, living an empty, lonely life at the end, even though he escaped the bloody deaths of most of the other characters in the film.  (Endings that the film, in a cheekily light-hearted bit of business, spells out for us in text blocks when various supporting characters first appear on screen.)  I didn’t find the ending boring at all — I thought it was the most moving part of the film.  (I’m also the guy who will defend to the death the greatness of the last twenty-five minutes of Peter Jackson’s The Return of the King, which others mock for having too many extended endings, but which I find to be the most emotionally affecting section of the entire trilogy.)

I loved The Irishman.  Bravo to Netflix for backing Mr. Scorsese’s expensive project.  I just watched it a few days ago, and this is already a film I can’t wait to see again.