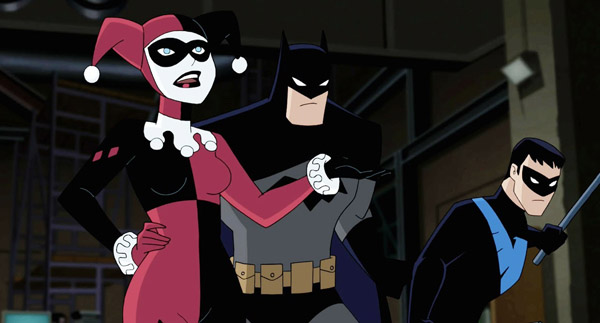 The character of Harley Quinn is extremely popular these days, with a much-loved solo series published by DC comics and a leading role in the recent (terrible) Suicide Squad film.  And so it’s not a huge surprise that the folks behind the series of DC direct-to-DVD/blu-ray movies would want to put Harley at the forefront of the latest new animated adventure.  What made this of more interest to me was the involvement of Bruce Timm, one of the key creative voices behind Batman: The Animated Series and the co-creator of Harley, along with Paul Didi, for Batman: TAS back in the day.

In Batman and Harley Quinn, Poison Ivy and another plant-based villain, the Fluoronic Man, have teamed up with a mad scheme to transform all of humanity into plant-based creatures.  Batman and Nightwing turn to Ivy’s former friend and confidante Harley Quinn to help find and stop her.

But unfortunately that’s about the only good thing I have to say about this new animated film.

The tone is all over the place.  There are times when the film feels like it’s trying to be a noir mystery, like Batman: The Animated Series was at its best.  But at other times it veers into wacky comedy that is a) usually not funny and b) wildly incongruous with the attempts at drama that surround those moments.  Some of the drama actually works.  There’s a moment in which Harley grieves at the unnecessary death of a scientist, and it is genuinely moving.  But it’s undermined by the wacky shenanigans that came before.

Unfortunately, the film is filled with the type of juvenile jokes and sexual innuendo masquerading as “adult” content that has plagued so many of these recent DC animated films (and the live-action ones as well!).  Watching Harley slink around in a nightie in the classic Batman: The Animated Series episode “Mad Love” was sexy and adult.  Watching Harley strip down to her undies and wiggle her barely-clad butt in Nightwing’s face in this film was, well, kind of gross.  (Just look at this screencap.  Or, better yet, don’t.)  That Nightwing and Harley seem to have sex at the start of the film feels wrong for a lot of reasons, and it throws off-balance the bantering between the Batman-Harley Nightwing threesome for the rest of the film.  The Harley character has often been wildly over-sexualized in her comic-book appearances, and in the recent Suicide Squad.  This wasn’t the case under Timm and Dini’s guidance in Batman: The Animated Series, and so I was disappointed that, while we did get to see Harley back in her original costume (rather than the revealing hotpants look given to her in Suicide Squad), this film so often fell into that trap, whether it was the revealing shot of her butt when we first see her at work as a waitress, or later shaking her breasts while singing and dancing in the henchman-bar.

At the same time as the film is trying so hard to be “adult” with all the sexual content, it is also trying desperately to be wacky and goofy.  This makes the film a tonal mess, which I could maybe forgive if the jokes were actually funny, but they’re mostly not.  I was thrown by all the instances of Batman and Nightwing behaving completely out of character because of an attempt at a joke.  The scene in the Batmobile in which Nightwing makes hand-signals (including a jerking-off gesture!!!!) to Batman making fun of a variety of C-list members of the Justice League would have been a very funny Robot Chicken sketch.  But here it’s so wildly out of character that I found it distracting, rather than funny.  We’re supposed to believe that the fate of the world is at stake, and yet Batman and Nightwing are scoffing at assistance from other members of the Justice League?  It doesn’t make any story sense, which prevented me from finding that at all funny.  That’s the most egregious example of what kept happening throughout the film, like Nightwing goofily dancing at the henchman bar instead of paying attention to what was going on.  The sequence in which Harley farts in the Batmobile can’t possible be funny to anyone over ten years old.

There is some comedy in the film that works, and some interesting ideas.  The afore-mentioned bar for super-villain henchmen is a neat idea, but that whole sequence was painful because it went on forever, and was so sluggishly paced that what few jokes there were didn’t work.  My eyebrows were raised at the appearance of a super-heroine “fetish” restaurant called Superbabes, in which we see scantily-clad waitresses walking around dressed up as a variety of female super-heroes and super-villains.  It’s an adult concept that I don’t automatically object to in a more “realistic” version of Gotham City.  But it doesn’t work in this film that for much of the time is trying to be goofy and silly rather than serious.  And it doesn’t play well considering the rest of the film’s sexual politics.  It winds up being just another excuse to feature overly-sexualized women in the film.

(On the other hand, I did laugh at the gag of Harley and Ivy trading boob-punches when fighting at the end.  Yes, that is one more juvenile sexual joke, but it’s one that felt more grounded in the characters and so it worked for me.  When these two women are fighting and trading kicks and punches and jabs, it’s understandable that someone might get punched in the breast, and I can buy that Harley’s reaction when that happened would be to angrily try to reciprocate.  So, because it felt in-character and not out of character, even though it was a juvenile joke, it worked for me.  I realize I am perhaps splitting hairs here, but for me this is an important difference, and a useful example of how I am not against either adult nor juvenile content in these sorts of superhero films, as long as it is done well.)

I mentioned this earlier, but I can’t overstate the delight in hearing Kevin Conroy and Loren Lester back voicing Batman and Nightwing.  They are both perfection in the role.  But I was pained to not hear Arleen Sorkin’s voice as Harley.  Why did they recast her role?  (I’ve read on-line some suggestions that Ms. Sorkin has retired, which is a shame.)  Melissa Rauch does her best, but Ms. Sorkin’s iconic work as Harley was sorely missed.

I was also a little bummed that, despite the return to the classic Bruce Timm designs (actually, Bruce Timm’s redesigns for the final run of The New Batman Adventures, which had my favorite look of all of the Bruce Timm animated shows), the animation here often felt like it was rushed or done on the cheap.  The animated masterpiece Batman: Mask of the Phantasm (spun out of the successful first run of Batman: The Animated Series episodes) was far better animated, and that was made twenty-five years ago!!

There were some things I liked about this film, such as:

* I liked the “Batusi” dance joke, and Batman’s perfect reaction.

* “Captain Kirking me for info” is a pretty great line, I must admit!

* I enjoyed hearing the classic Batman theme, briefly, when we see the Batwing take flight late in the film.

But overall, this was another swing and a miss for DC Animation.  Sadly, these DC animated films disappoint me far more than they satisfy these days.