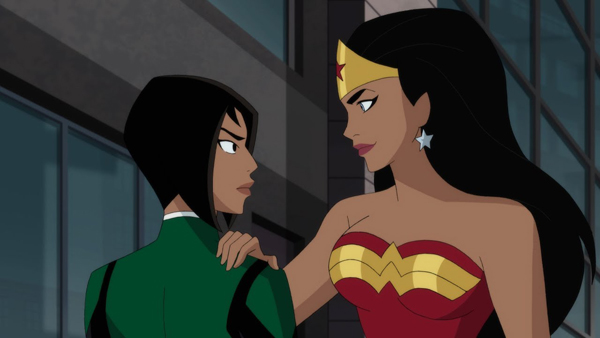 The latest direct to blu-ray DC animated film, Justice League vs. the Fatal Five, is a relatively small-scale adventure arriving on the scene without too much to get your average fan excited.  It’s not an adaptation of a famous comic book story, and on the surface there doesn’t appear to be much that is extra exciting or epic about this super hero team versus super villain team battle.  And yet, I really enjoyed it!  Justice League vs. the Fatal Five is one of the strongest DC animated films to come out in years!

The film was overseen by Bruce Timm, who for years masterminded the terrific DC animated series and films.  I love having his voice back involved with a new DC animated film, and it’s a joy to see his iconic character designs back in use.  Even better than that, this film features the return of a number of the classic voice actors from Bruce Timm’s previous DC animated series: Kevin Conroy as Batman, Susan Eisenberg as Wonder Woman, and George Newbern as Superman!  And, even better than THAT, this film is in continuity with Mr. Timm’s previous series!  (It doesn’t directly connect to anything that came before, but it is clearly set in that universe, taking place several years after the finale of Justice League Unlimited.  This is very cool, because while these actors have occasionally been used in the various DC animated films from the past decade, those have all been stand-alone tales set in their own continuity.)

It is a joy to see these characters, illustrated in this style, and voiced by these amazing actors again.  And the soundtrack gets in on the fun too, occasionally quoting the memorable themes from the previous Bruce Timm animated shows.  We hear the theme from Superman: The Animated Series when Supes first appears and saves the kid, and we hear the Justice League theme when the heroes assemble in Portland, and again later at the JL museum in the future timeline.  This made me very happy!

The film focuses on a small group of heroes: in addition to the big three (Superman, Batman, and Wonder Woman), the film gives us Mr. Terrific, Star Boy (from The Legion of Super Heroes), Jessica Cruz (a relatively new Green Lantern, created by Geoff Johns & Ethan van Sciver in 2014), and Miss Martian.

The main characters are Jessica (Green Lantern) and Thomas (Star Boy).  It’s fun to see these new-to-the-animated-universe characters, and the film digs deeply into their individual stories.  Both are neuroatypical characters, and it’s a delight to not only see these types of characters on-screen, but even better to see them portrayed in such a positive manner.  Thomas is trapped in his past (our present), without the futuristic medicine that he was used to relying upon.  Jessica, meanwhile, battles crippling fear and doubt, having been emotionally scarred by a horrific encounter with a madman in the woods who murdered her friends.  It’s ironic to see a Green Lantern (whose power is based on willpower, and resistance to fear) suffering such difficulties.  Jessica’s heroism is in how she is able to overcome her fears to live a normal life (and, also, an above-normal one as a superhero!).  I enjoyed watching the development of the relationship between these Jessica and Thomas, as Jessica seemed to be the only member of the Justice League with a sense of how to connect to Thomas.

The villains, like Star Boy, come from The Legion of Super Heroes (DC’s futuristic super-team set about a millennia in the future).   I have no previous connection to The Fatal Five, and while I can’t say that they are particularly memorable villains, they’re enjoyable enough and prove to be worthy foes for our heroes.  Their individual character-designs were cool, and the voice-work was strong.  I’m not overly familiar with the actors who played these roles, but I enjoyed how each villain had a distinct voice and persona.  (The Fatal Five have appeared before in the Bruce Timm DC Animated universe, in the Justice League Unlimited episode “Far From Home.”  As best as I can tell — I haven’t watched that JLU episode in a while — there were no continuity problems that I can detect between that episode and this film.  I appreciate that level of attention to detail by the filmmakers.)

* I’ve complained about how several of the DC animated films from the past few years were annoyingly juvenile in their attempts to be more adult, with cursing and even a bit of nudity that I thought was out of place.  And so it was a bit of fresh air to actually see a bit of (tasteful) male nudity in this one (when Starman finds himself, ahem, out of uniform at the beginning).  That was funny, and a nice reversal of the cliche young-heterosexual-male-focused approach for a superhero tale to take.

* Jessica Cruz’s origin story was surprisingly scary.  This is the type of adult storytelling I like to see.  I don’t need sex and violence (not that those things can’t be used well — they just haven’t been in these recent DC animated films); my preference is for adult content in terms of the complexity of the characters and the situations they encounter.  Speaking of violence, I was surprised by the high body-count of the film’s third act.  Quite a few guards get slaughtered by the Fatal Five at the end, when they fight to retrieve their time machine!

* I enjoyed seeing this far more civilized than usual depiction of Arkham Asylum.  (If that is indeed where Thomas was being held.  Since we saw Batman and Two-Face there, I assumed it was Arkham, though I’m not sure if the film ever stated that definitively.)  Speaking of Two-Face, I like that he and Thomas had become buddies.  There’s a whole movie in THAT untold story!!

* It was fun to see the big mid-movie fight take place in Portland, rather than the usual generic DC cities like Gotham or Metropolis.

* The idea that “situation green” is actually a warning among the Green Lanterns is a very clever idea.

* There were a few storytelling beats that didn’t work for me.  I think the film makes a mistake in revealing that Thomas has been trapped in our time in an asylum for 10 months.  That feels like way too long a time.  (What did the villains trapped in the time-sphere do for all that time?  Didn’t they ever need to eat?  Or go to the bathroom?)  Later, when Jessica allows herself to be taken prisoner by the Fatal Five and taken to Oa, I wondered why she didn’t try harder to fight them once they were away from Earth (and, presumably, no longer able to detonate all of the bombs they’d planted).  I’m also not sure why Mr. Terrific was so sure that the villains’ time machine was safe from them, when it seems to have only been guarded by a bunch of non-super-powered human guards (all of whom later get killed by the Five).  Oops!  Also, while I loved seeing all of the Legion characters at the end, I’m puzzled as to why they couldn’t have time-traveled back just a little bit further, in order to have been more help…?  (That’s the problem with time-travel stories — once characters have that ability, it’s hard to find a reason why they couldn’t always use it to prevent any losses.)

* The film built to a surprisingly emotional climax.  I was moved hearing Jessica’s triumphant declaration of the Green Lantern oath at the end, and the hero’s self-sacrifice to save the day (I won’t spoil who) was a very effective scene.

I quite enjoyed Justice League vs. the Fatal Five!  I’d love to see lots more future animated series in this mold (and in this continuity)!