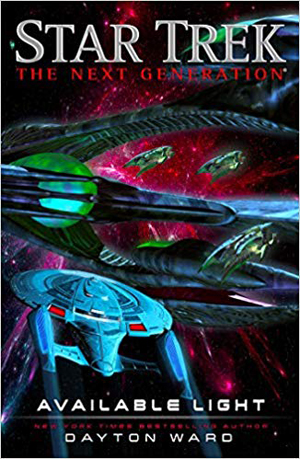 Simon & Schuster/ Pocket Books have been publishing Star Trek novels on a regular basis for as long as I can remember.  (I believe their first one was The Entropy Effect by Vonda N. McIntyre from back in 1981, and they’ve been publishing Trek books consistently ever since.)  But for the last year-plus, that regular schedule was interrupted by behind-the-scenes issues.  (Click here for more details.)  Thankfully, not only has the publishing of new Star Trek books resumed, but they are continuing, uninterrupted, the inter-novel continuity that I have so loved in these Trek books for the last 10-15 years, continuing the stories of these characters beyond the end of the 24th-century-set Trek shows.

The latest novel, Available Light, by Dayton Ward, picks up the threads left by the end of the last several Trek novels.  In David Mack’s Section 31: Control, from 2017, that secret organization was finally defeated, and all of their misdeeds from the past two centuries were made public.  At the end of Mr. Ward’s previous novel, Hearts and Minds, also from 2017, we learned that this release of information included Captain Picard’s involvement in the heretofore secret removal of corrupt Federation President Min Zife (from the climax of the “A Time To…” series of novels from 2004, that were set in the year leading up to the events of Star Trek: Nemesis).

Available Light tells two parallel stories.  One is an exploration of the repercussions, across the Federation, of the exposure of Section 31 and all its actions.  Federation Attorney General Philippa Louvois (from the TNG episode “The Measure of a Man”) and Starfleet Admiral Akaar (born in the Original Series episode “Friday’s Child”, Akaar has been developed into a major character in the last decade of Trek novels) are working together to track down all known and as-yet-unknown Section 31 agents and those starfleet officers who were involved with Section 31.  This includes Admiral William Ross (established as working with 31 in the DS9 episode “Inter Arma Ainem Silent Leges”) as well as Nechayev, Jellico, and Nakamura (all admirals seen on TNG who the novel series has previously established as being connected to 31).

The second half of the book is a wonderful tale of an encounter with new alien races and a mystery in space in the classic Star Trek style.  The Enterprise-E, continuing their new mission of deep-space exploration, encounters an enormous alien spacecraft, damaged and operating under low power.  The spacecraft seems designed to house an enormous population, but no life forms are aboard.  Meanwhile, a group of salvagers have laid claim to the vessel.  But the Enterprise crew soon discovers that the original inhabitants of the vessel, the Osijemal, had not abandoned it, and are in dire need of help.

Both stories in the book are great.  I love reading stories of new, original alien races and characters and of space exploration.  Star Trek is built on those types of stories.  But when the Star Trek novels tell those types of stories, they risk feeling like inconsequential stand-alone adventures.  (For the first few decades of Pocket Books’ Star Trek novels, this was the pattern the books followed: totally stand-alone adventures.)  So I love getting this type of story woven together with a story that has major consequenecs for Captain Picard and the other characters.  It’s the best of both worlds.  (See what I did there?)

This book has a great story for Picard, as he has to wrestle with the fallout of the public exposure of his actions from years ago.  It’s interesting to see the usually-perfect Picard get pushed into an uncomfortable spot.  The novel also has a great story for Enterprise first-contact specialist T’Ryssa Chen, who was introduced in Christopher L. Bennett’s novel Greater Than the Sum.

But as interesting as that story was, my favorite parts of the books were the chapters set back on Earth, checking in with various chracters who had been involved with Section 31.  I was delighted that Admiral Ross was involved in the story.  Ross was a great character on DS9, probably my favorite Starfleet admiral ever, and I was sorry that the post-finale novels wrote him out of the story so quickly.  (I was disappointed again that, despite this books’s beginning with a chapter about Ross, he was again quickly written out of the story.)

If the book has any weakness, it’s that I wanted lots more of all of the 31-fallout stuff happening across the Federation.  There’s a great chapter in which the tough-as-nails Admiral Nechayev decides to fight rather than allow herself to get taken into custody; but I wanted to see more of what happened to her after that chapter!  And I wanted to see more about what Jellico was doing or thinking.  (Despite his beng mentioned several times in the book, he didn’t get a chapter devoted to him.)  I hope and expect that we’ll continue to follow what is happening to these characters in future books.

I was afraid that part of the reason for the year-long halt in new Trek books was that perhaps the folks at Paramount/CBS were unhappy with the novels’ continuity, particularly with a New Picard show in the works that will, I suspect, contradict some/much of what has been established in these books.  I don’t know what did or didn’t happen behind the scenes.  But for now, at least, I am delighted that this fantastic continuing Star Trek story has resumed.  This ever-growing saga is a delight and is worth the time of all Star Trek fans.

I very much enjoyed Available Light, and I hope we won’t have to wait too long for another new novel to pick up the story left hanging by the book’s cliffhanger ending.