Skip to the content
HomeWritten PostJosh Reviews The Midnight Sky 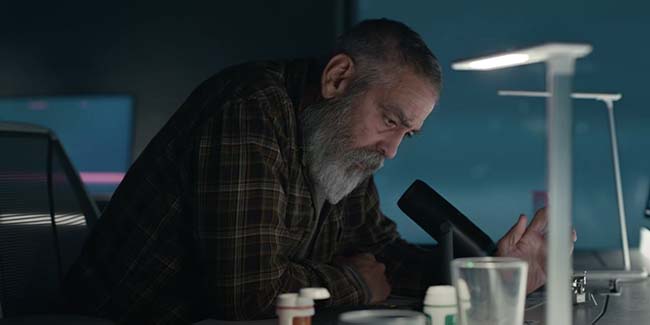 The Midnight Sky stars George Clooney (who also directed the film) as a grizzled scientist left alone at an arctic research station after an environmental catastrophe has devastated the globe.  After a while, he discovers that he is not as alone as he’d thought: a young girl has secretly stayed behind at the station along with him.  Together, the two must face a perilous journey in an attempt to warn a crew of astronauts, returning to Earth, of the danger that awaits them.

The Midnight Sky was written by Mark L. Smith (who wrote The Revenant and is one of many different people who were at one time attached to write the as-yet-unmade fourth Star Trek film for J.J. Abrams’ Bad Robot studios), adapting the novel Good Morning, Midnight by Lily Brooks-Dalton.  (I have not read that novel, so I am judging The Midnight Sky based on the film, alone.)  The brief description I wrote above is one that appeals to me, and I am always excited for a new original sci-fi film.  I loved the first two films George Clooney directed (Confessions of a Dangerous Mind and Good Night, and Good Luck), and while in my opinion none of his subsequent films have been nearly as good, I know he has skills as a director and I was excited to see what he could do with a sci-fi story.  And yet, unfortunately, I must report that I found The Midnight Sky to be a huge disappointment.

The film started off well!  I really enjoyed the mysterious set-up; I love that the film doesn’t hold our hand to spell out what exactly is going on.  We’re forced to catch up with events as we see the evacuation of the research station, and see that George Clooney’s character (who we later find out is named Augustine) has stayed behind for reasons that at first are unclear.  I really dug this almost wordless early-going, as we watch the story unfold as basically a silent film.  We follow Augustine’s life alone at the station and, then, the events that unfold after he discovers the young girl (whose name we learn is Iris), who appears mute.  George Clooney is a far better actor than his movie-star celebrity might lead one to believe; he’s incredibly compelling to watch in these early scenes.  And I quite enjoyed the silent work of Caoilinn Springall, the young actress who plays Iris.  These sections are also beautifully directed by Mr. Clooney, who finds some compelling and eerie visuals in these scenes of two people alone amidst the cold technology of the base and the arctic expanse that surrounds them.

But then the film starts cutting away from Augustine and Iris, to see what’s happening with the group of astronauts on their way back to Earth.  Mr. Clooney assembled a terrific cast for this crew: David Oyelowo (Selma, A United Kingdom, Rise of the Planet of the Apes), Felicity Jones (The Theory of Everything, Rogue One), Kyle Chandler (Argo, Zero Dark Thirty, The Spectacular Now, Manchester by the Sea, First Man), Demián Bichir (The Hateful Eight, Alien: Covenant), and Tiffany Boone (Hunters).  That’s a great cast, and I quite loved the look and design of the space-ship (its interiors and exteriors, the tech as well as the costumes).  And so, what I was hoping for was something like what we got in Ridley Scott’s adaptation of The Martian, in which we followed a compelling parallel story happening among the astronauts on a space-ship while our main character faced peril alone on the ground.  Sadly, that was not the case.  I found all of the scenes with the astronauts to be fairly lifeless, and the characters to be flat and one-dimensional.  In the early-going, I found those scenes to be an unfortunate distraction from the far better drama happening with Augustine and Iris back on earth.

In the second half of the film, unfortunately, things got worse.  Augustine and Iris’ adventures on Earth started to make less and less sense.  (How did the ice around their vehicle suddenly turn to water, in the middle of what should have been a bitter-cold night??)  And things go from boring to nonsensically crazy up in space.  There’s a scene of intense gore that — while incredibly memorable!!! — felt wildly out of place in the somber, elegiac tone of the movie I’d been watching.  And then my jaw dropped to the floor as the scientist-astronaut characters started making one ludicrous decision after another.  (I can’t believe that two of the men would abandon the other two surviving astronauts — one of whom was pregnant!! — to complete the lengthy space-flight mission ALL ON THEIR OWN.)

AND NOW SPOILERS FOR THE END OF THE MOVIE.

Still here?  Well, I though things were a mess, and then we got to the end of the movie and I was stunned by how everything seemed to fall even more to pieces.  First off, we get a time-warping, A Beautiful Mind type explanation as to Iris’ true identity, which to me completely erased any dramatic meaning from the Augustine-Iris story we’d been watching.  To this point, this was the only piece of the movie that worked for me.  Then to discover that Iris was never really there just made me crazy and destroyed the one aspect of the movie that I’d been enjoying.  If none of those events happened — why had I been watching this for two hours??  Meanwhile, we get the supposedly “happy” ending in which the surviving astronaut couple reverse course to go live and raise their baby alone on a deserted alien planet they’d discovered.  The movie seems to suggest this is a happy ending for those characters, and perhaps for the human race as a whole who can get a new start on a fresh world.  But even assuming these two astronauts are able to survive this long journey all on their own without injury or death; and then assuming that the man is somehow able to deliver the woman’s baby, by themselves out in space, despite neither of their presumably having any training in childbirth… then what?  These three will live alone on this planet?  How will they maintain power on this alien world?  What will they eat and drink?  OK, somehow they magically solve all this problems… then what happens when the parents eventually die of old age?  The child lives a terrible life all alone… and then eventually dies too?  Even if the couple has LOTS of kids… that’s still the end of the human race a few decades down the road unless they decide to dive into incest, right?  I just don’t get this ending at all.  I don’t mind a downer ending if it’s well done.  But the movie doesn’t treat this ending as a downer ending… it seems to me to treat it as a happy ending, which just completely mystifies me.  Sigh.

I really wish I liked this movie more.  I really wanted to like it!!  But I’m afraid The Midnight Sky didn’t work for me at all.