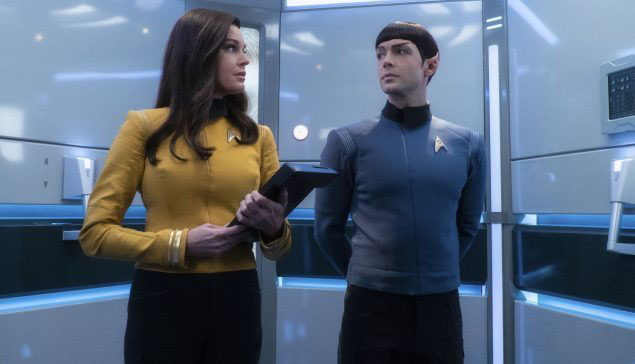 Last year in the months leading up to the launch of the second season of Star Trek: Discovery, CBS All Access posted a series of four Star Trek short films, which they nicknamed “Short Treks.”  In the months leading up to the start of the new Picard series, it looks like they’re doing the same, with a new round of six new short films.  The first one, “Q & A”, was recently released.  It depicts Spock’s first day on board Christopher Pike’s Enterprise (prior to the events of the original Star Trek pilot, “The Cage,” as well as the events of Discovery’s second season), in which he and Number One get trapped in a turbolift together.

I love the idea of these “Short Treks” as a way to give us vignettes set across the Star Trek universe, in different times and different locations.  The Star Trek universe is vast and deep, and there are so many wonderful areas and settings and characters to be mined for new stories.  One of the most fan-favorite aspects of Discovery’s second season was the way they incorporated Christopher Pike (now played by Anson Mount) and Spock (now played by Ethan Peck) as important characters, so the idea of returning to those characters and setting makes sense for this first new “Short Trek.”  Discovery season two also recast the role of Pike’s first officer, Number One (played by Majel Barrett in “The Cage” and by Rebecca Romijn in her brief appearances on Discovery).  I was bummed that Number One had so little to do on Discovery, so I was pleased that she and Spock would be the focus of this new short film.

But I wasn’t as taken with “Q & A” as I was with the four previous “Short Treks,” and I found it vastly inferior to Michael Chabon’s previous effort, the beautiful “Calypso” (which represents possibly the best 15-ish minutes of new official Star Trek in a decade).

The short is cute, with some nice banter between Spock and Number One as they while away the hours stuck in the turbolift.  But I didn’t find the banter to be nearly as funny or interesting as I’d expected, nor that revelatory for either of their characters.  We never got to know Number One that well in “The Cage,” but the Number One in this short strikes me as a very different character than the woman we saw in “The Cage.”  The Number One of “Q & A” is surprisingly snarky, and I just don’t buy that this stiff, buttoned down woman would ever start singing in front of a man who she’d just met that day.  The short is supposed to show us that Spock and Number One are kindred spirits, but I don’t think the short ever quite earns that moment of Number One’s belting out “I Am the Very Model of a Modern Major-General.”  (Also, is the idea that Spock and Number One are actually similar supposed to be a revelation?  That seemed pretty obvious to me from viewings of “The Cage.”)  It’s ridiculous that Number One would pretend on the bridge, at the end, not to know Spock’s name.  (Doesn’t the whole ship know that she and Spock were just trapped together in a turbo lift for HOURS?)  Most egregiously, I found Number One’s advice to Spock never to “let his freaky show” to be, frankly, totally wrong for a dedicated Starfleet officer who should understand the value of IDIC (Infinite Diversity in Infinite Combinations).

I also have to admit to being hugely annoyed by the ridiculous special effects shots of the outside of the Enterprise turbolift, as it appears to zoom through a vast empty space.  How could anyone possibly believe that the original Enterprise had so much empty space inside of it??  The ship is big, but it also is a city that houses over 400 people.  It’s lunacy to imagine that the turbolifts travel through such an enormous, cavernous space.  I know this is just a few-seconds-long shot, and a minor part of the episode, but it bugs the hell out of me.  Whereas Star Wars was space fantasy, part of Star Trek’s charm and effectiveness has been that it has always attempted to present a plausible, believable look at the future.  And yes, of course there have been plenty of moments over the years when Trek fell short of that mark.  But this insane visual effects shot completely throws me out of the show, and makes me incredulous that none of the many men and women involved in creating this short film stopped to question it.

What’s good about the short?  I love the callbacks to the way Leonard Nimoy originally played Spock in “The Cage” and the early Original Series episodes.  When Number One tells Spock not to shout, that’s a joke about how Mr. Nimoy often had Spock shouting his dialogue in those early episodes.  (Ethan Peck’s imitation of “Shouty Spock” is excellent!)  Spock also famously smiled in “The Cage,” (when he saw the singing flowers), so I like that this short shows Spock smiling at both the beginning and the end.  This younger Spock isn’t quite as in command of his emotions as the older, more experienced Spock would be.  This makes sense and is a nice bit of continuity for the long-time fans.

I also really do like Rebecca Romijn as Number One.  She really looks the part, and I like the way she brings Number One to life, honoring Majel Barrett’s performance while putting her own spin on the character.  It’s great to get to see this intelligent, tough woman as the first officer of the Enterprise.  (It’s also interesting that this short refers to Number One as Una, which was the unofficial name that has been given to her unnamed character from “The Cage.”)

This was a nice taste of new Trek, even though it didn’t dazzle me the way I was hoping for.  I’m curious to see what’s next.