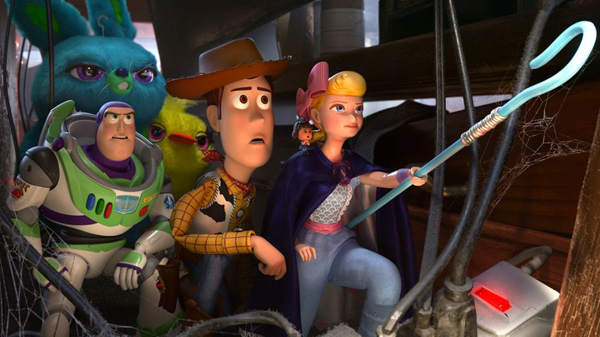 I needn’t have worried.

Once again, the geniuses at Pixar have produced a gorgeous work of art.  Toy Story 4 is beautiful to look at (the animation is extraordinary) and also rich and resonant beyond what I could have imagined.  I loved it.

Set some time after the end of Toy Story 3, Woody and the gang now belong to a young girl named Bonnie.  But whereas Sheriff Woody was, for a long time, Andy’s favorite toy, Bonnie has started leaving him in the closet in favor of other toys she likes more.  To make himself useful, Woody sneaks into Bonnie’s backpack on her first day of kindergarten, where, during an art project time, he sees Bonnie create a new toy she names “Forky” out of a spork, a pipe-cleaner, and other junk.  When Forky comes to life as a brand-new toy, he considers himself trash, rather than a toy, and continually tries to escape Bonnie to throw himself back in the trash.  Woody and the gang, seeing how much Bonnie loves her new creation, consider it their mission to prevent Forky from escaping.  But on a family road trip, Forky gets away from the family’s RV, and Woody chases after him.  Separated from his friends, Woody comes across Bo Peep, who had been given away by Andy’s sister years before.  Bo has been living as a “lost toy” for years, a fate that, at first, horrifies Woody.  This has been his fear for years, a fear that Woody is now forced to confront head-on in a way he never has before.

I love how deeply these Toy Story sequels have explored the very nature of the original premise.  That Forky, made up of pieces of trash, can come to life after Bonnie creates him, leads to all sorts of fascinating questions (as Kristen Schaal’s Trixie says at one point: “I have all the questions”), and the film allows Forky (and the other toys) to explore Forky’s existential dilemma (he considers himself trash, while Woody and co. consider him a toy) in a way that is surprisingly sophisticated for a kids’ film.  (Of course, Pixar’s films have never been solely “kids’ films.”  That’s their magic.)  Tony Hale is magnificent as the innocent and doubt-filled Forky.

One of the best creative choices in the Toy Story sequels is that they have not shied away from depicting the passage of time, and what that would mean to our toy main characters.  There’s a world in which time could have been frozen in these films, with each sequel still taking place in and around the bedroom of young Andy.  But, thankfully, the sequels have gone in an entirely different direction, and we’ve seen Andy grow out of his time playing with toys like Woody and Buzz.  I have written here before that most stories have a sad ending eventually — it’s only happy depending on where you stop.  The Lord of the Rings: The Return of the King, has a happy ending.  But if you keep reading on through the Appendices (which I love), and you read what happens to all of the characters in the years that follow, that happy ending turns bittersweet.  The same goes here.  When Andy gave the toys to Bonnie at the end of Toy Story 3, that was a happy ending and a new beginning for Woody and the gang.  But, of course, Bonnie will grow up, just as Andy did.  And so here at the start of Toy Story 4, we already see that things aren’t so perfect for Woody, who has lost his “favorite toy” status.

I’m delighted that they brought back Bo Peep, voiced by Annie Potts.  Bo was absent from Toy Story 3.  I didn’t miss her at the time, because Toy Story 3 was stuffed with so many great characters.  But boy is it a delight to have her back here, and I love what a huge part of the story they made Bo.  Her relationship with Woody is so sweet; it’s the heart of the film.  Bo has evolved into a wonderfully complex and interesting character.  I love how competent Bo is, and how brave.  Woody’s greatest fear has always been getting lost, but Bo has embraced her life as a “lost toy.”  She’s not pie-in-the-sky naive, but she’s also not broken and bitter.  Bo is tough and fierce while still being caring and compassionate.  (I love the moment when she takes off her goofy dress to reveal her cool pants beneath!)  This is a great character, and the talented Annie Potts is amazing as Bo’s voice.

The focus on Woody, Bo, and Forky means that most of the other characters are pushed into the background.  Buzz (Tim Allen) gets a small B story, in which he learns to listen to his “inner voice” (which means the dialogue that he hears when he pushes the buttons on his chest).  Those scenes are funny, but they feel like a bit of a step backwards from the very competent Buzz we saw in Toy Story 2 and 3.  Joan Cusack’s Jessie is one of Bonnie’s new favorite toys, but Jessie is far more in the background here than she was in the last two films.  And the original gang (Rex, Hamm, Slinky Dog, Mr. & Mrs. Potato Head) are only in a handful of scenes.  I miss those characters because I love them, but I am not criticizing the film for not seeing more of them.  There’s a lot going on in this film, and a lot of characters to service, and I think they made the right choice in allowing the focus to be firmly on Woody, Bo, and Forky.  Their stories needed this amount of screen-time in order for them to be so emotionally affecting for the audience.

As with the previous Toy Story films, we do get a lot of new characters/toys.  Keegan-Michael Key and Jordan Peele are endlessly hilarious as plush toys Ducky and Bunny.  Keanu Reeves steals the show as Duke Caboom, a toy Canadian stunt motorcycle-driver.  Christina Hendricks kills it as Gabby Gabby, the creepy, lonely doll of whom Woody runs afoul in an antique shop.  I love all of these new characters so much!  I also loved the blink-and-you’ll-miss-them cameos by Mel Brooks, Carol Burnett, Betty White, and Carl Reiner as the four older toys in Bonnie’s closet.  What a clever idea!

Although Don Rickles sadly passed away before Toy Story 4 was made, I’m delighted that they were still able to include him as Mr. Potato Head, making use of previously-unused recordings.  (Click here to read more.)  I’m so happy that they were able to achieve this.

I’ve seen some so-so reviews for Toy Story 4, but I don’t know what movie those reviewers were watching.  I loved this film, and I found it to be very satisfying.  I thought the story went into new and unexpected directions.  I thought it was very funny and also incredibly moving.  (If you didn’t shed a tear at some of the goodbyes in the film’s final moments, then you are made of far sterner stuff than I.)  It’s incredible that, almost 25 years after the first Toy Story, this series still has so much gas left in its tank.  The ending of this film feels very final, but then again, I thought the same way at the end of Toy Story 3.  If Pixar wants to give us a Toy Story 5 a few years down the road, I’ll be there.