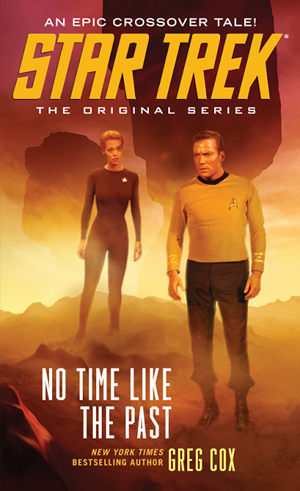 I am having fun catching up on a number of Star Trek novels from recent years that I have missed.  Most of these books that I had skipped reading are stand-alone tales from the Original Series era, and the first batch I have been reading have all been written by Greg Cox.  I have quite enjoyed every one of Mr. Cox’s Kirk-era novels, and No Time Like the Past is no exception.

During Kirk’s original five-year mission on board the Enterprise, he attempts to mediate a diplomatic conference aimed at curbing Orion piracy.  An Orion attack sends the conference into chaos, but Kirk’s life is saved by a young woman who calls herself Annika Seven.  A century later, in the Delta Quadrant, the starship Voyager detects an obsolete Starfleet distress signal.  Their investigation leads them to a hidden installation set beneath an enormous sculpture of the head of Captain James T. Kirk.

This book has a great set-up, as we encounter the dual mysteries of Seven of Nine’s presence in Kirk’s era, as well as the weirdness with the Starfleet distress signal far beyond where any Federation starship had gone before and the memorable image of the enormous Kirk-head on a planet in the Delta Quadrant.  It’s a great kick-off to the story, and what follows is a fun adventure/mystery as Seven and Kirk attempt to unravel the truth of what is going on.

The idea of Captain Kirk meeting Seven of Nine is a fantastic idea, and a great basis for a novel.  (I am not a big fan of Voyager — I consider it the weakest of the Star Trek series — but I cannot deny that this is a great hook for a story.)  For the most part, the novel follows through on that premise… though I must admit that I was a little surprised that we barely see any hint of flirtation between the two.  That Captain Kirk, who seemed to bed a different beautiful alien woman in nearly every episode of the Original Series, would not engage in some heavy flirting with the beautiful Seven of Nine was a surprise to me!  On the one hand, I like that Mr. Cox took both characters seriously, and depicted Captain Kirk as someone who acted professionally around Seven.  On the other hand, while I wouldn’t want to see Kirk acting like a boor around Seven, I did miss the fun of a little romantic interplay between the two characters.  I felt we missed out on that aspect of the story’s premise.

I enjoyed the way the story dug deeply into several different adventures from the Original Series, bringing the Enterprise back to several well-known locations: Gamma Triangula VI (from the Original Series episode “The Apple”), Cheron (from “Let That Be Your Last Battlefield”), and Sarpeidon (from “All Our Yesterdays”).  It was fun to see Mr. Cox provide fascinating explanations for some of the inconstancies and plot holes from those episodes.  For instance, in “The Apple,” why would the utopia created by Vaal for his subjects also involve deadly poisonous plants and exploding rocks??  (Mr. Cox allows Spock to suggest that the deadly plants were deadly only to non-Vaalians, and as such were a defense mechanism for them; and that the exploding rocks were the result of a flaw in Vaal’s programming that developed over the millennia that Vaal was in operation.)  Why didn’t the Sarpeidons (from “All Our Yesterdays”) leave their planet once they knew it was doomed?  If they had the technology to travel through time, surely they had the technology to travel through space?  (Mr. Cox suggests that Sarpeidon was the only planet orbiting its sun, and so no other planets were within attainable reach.  Rather than leaping directly to interstellar travel, their society looked inward.)  I was also intrigued by Mr. Cox’s depiction of the events that led to the destruction of all life on the planet Cheron (from “Let That Be Your Last Battlefield”).  Those flashback scenes were intense and horrifying.  (The racial issues of “Let That Be Your Last Battlefield” are hardly subtle, but they remain potent even fifty years later.)

I was also super-happy to see that the story not only referenced the Original Series episode “All Our Yesterdays,” but also A.C. Crispin’s two wonderful follow-up novels: Yesterday’s Son and Time for Yesterday (collectively known to Trek fans as “Yesterday’s Saga”), which explored more of Zarabeth and Sarpeidon, as well as Spock’s son with Zarabeth, Zar.  (I loved Kirk’s in-joke of a comment that “yesterday’s sagas should be left as they were.”)

If I have any objection to this novel, it’s that I didn’t love the “reset button” ending.  At least Kirk and Seven retained their memories of what had transpired.  Still, I don’t love that sort of “reboot” ending to time-travel stories.  It always feels somewhat unsatisfying to me.

Seven repeatedly refers to the Temporal Prime Directive when in Kirk’s time, and everyone seems to know exactly what she’s talking about.  But I don’t believe that was mentioned until TNG, a century later (in the episode “A Matter of Time”).  I wasn’t sure this would exist yet, in Kirk’s era.

I enjoyed the inclusion of Orions in this story.  They are good villains about whom there is still a lot to learn and discover.  It was a nice touch that the Orion ship was named the Navaar, after the Orion woman who appeared in the Enterprise episode “Bound,” and who has also appeared in Christopher L. Bennett’s “Rise of the Federation” series of novels.

Over-all, this was another great stand-alone Trek novel.  I am enjoying catching up with these books that I had missed!  Next up: Foul Deeds Will Rise, a sequel to the Original Series episode “The Conscience of the King.”  I’m looking forward to that one, as that episode has always seemed to me to be ripe for a follow-up.