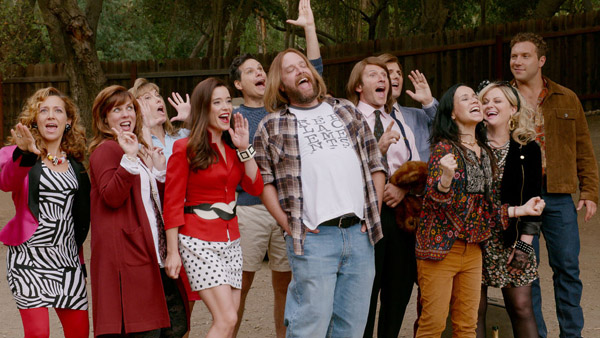 I like David Wain’s 2001 film Wet Hot American Summer, but I absolutely adored the 2015 Netflix miniseries First Day of Camp.  The success of that endeavor clearly inspired creators David Wain and Michael Showalter to come back for another go.  The new miniseries, Ten Years Later, plays out the premise hinted at by the epilogue of the 2001 film, the idea that these camp friends would reunite ten years later to see how they’d all changed. While I don’t think this second mini-series has quite the laugh-per-minute ratio that First Day of Camp did, I can say that I quite enjoyed Wet Hot American Summer: Ten Years Later.  It’s a pleasure spending more time with this crazy band of characters and these incredible comedic performers.

Although it was made a decade-and-a-half after the original film, the previous mini-series (Wet Hot American Summer: First Day of Camp) was set BEFORE the film, on the first day of the 1981 summer camp season (while the film had depicted the last day).  I was endlessly amused by the sight of these forty-something actors playing even younger versions of the characters they’d all played back in 2001.  Expanding to an eight-episode mini-series allowed the series to let all the characters — played by this incredible array of very funny and talented actors — to shine, allowing all sorts of crazy comedic digressions that I found endlessly entertaining.  I also liked how David Wain and Michael Showalter used the expanded format to amp-up the lunacy of the story.  The original film is a crazy exaggeration of what actually goes on at summer camps (even what actually went on in the more out-of-control environment of many 1980’s summer camps, when the film is set), but the mini-series went way beyond that, bringing in government conspiracies, falling satellites, hand-to-hand combat, and all sorts of other nuttiness.  It all worked perfectly, a very-rare example of a sequel made years later that was as-good-as, if not better, than the original!

And so, having loved First Day of Camp, I was of course excited for another return to Camp Firewood.  David Wain and Michael Showalter have crafted another very entertaining show.  This eight-episode mini-series format works great for this sort of loose ensemble piece.  There is a LOT to enjoy here in Ten Years Later, with an extraordinarily talented ensemble clearly having a lot of fun.

There were, though, a few wobbly aspects of this second mini-series.  While I was impressed by how they got everyone from the original film back for First Day of Camp, the structure of Ten Years Later indicates that they might have had a little more trouble making the schedules of all these now-famous actors work.  First Day of Camp made a joke about how clearly not all of these famous people were available for the whole shoot; Bradley Cooper’s character putting on a ski-mask to become the obviously-played-by-a-double “D.J. Ski-Mask” is a prime example.  There is a LOT of that to be found here in Ten Years Later.  Joe Lo Truglio’s character covers himself with a blanket and takes a nap that lasts several episodes.  Elizabeth Banks’ character is, for much of the show, entirely separated from the other characters in her own story-line.  And, in the most notable example, they entirely recast Bradley Cooper’s part.  Adam Scott now plays the role, with the on-screen explanation being that the character had minor surgery to repair a deviated septum, and that while he’s worried no one will recognize him, everyone does.  That’s a very funny joke.  ALL of the ways they worked around the cast’s schedules are funny.  But the cumulative result is that this mini-series feels more scattered than the first one did, with characters separated from one another for multiple episodes in a way that wound up feeling a little unsatisfying.  (Breaking up the pairing of Ken Marino and Joe Lo Truglio for multiple episodes is a loss, however funny the “cover” winds up being.)

First Day of Camp brought in a LOT of great new characters.  Ten Years Later does the same, though not quite as successfully.  There’s a funny running joke regarding new characters played by Mark Feuerstein and Sarah Burns.  Although they were not in the original film or the previous mini-series, the show pretends that they were, even inserting them into “flashback” scenes from the original film.  That’s a very funny idea.  (It’s an obviously comedic version of what Lost did unsuccessfully with Nikki and Paulo, new characters introduced in season two that the show pretended had been there all along since season one.)  But while I love the concept, the show focuses a lot on these two new characters, right from episode one, and I found myself wishing we could spend less time with these two new characters who I didn’t care that much about, and more with all the other characters I wanted to see.  It felt to me like a too-obvious attempt to cover for the lack of availability of some of the rest of the cast, rather than a creative choice.

But while I have some quibbles, there is still SO MUCH TO ENJOY about Ten Years Later!!

And so many of the great new characters introduced in First Day of Camp are back as well: Lake Bell, David Wain, Paul Scheer, Josh Charles, Kristen Wiig, Rich Sommer, Chris Pine, Jason Schwartzman, and more.

There were a lot of great new additions for this new mini-series.  Let’s start with Adam Scott.  It was GREAT getting a Parks and Rec reunion between him and Amy Poehler!!  (Not to mention a Party Down reunion between him and Ken Marino!)  I do, though, wish that Mr. Scott had more to do in the series after the first few episodes.  Alyssa Milano was PERFECT as a maybe-psycho nanny.  She was a very fun addition to the ensemble!  Jai Courtney was also perfect as the handsome movie-star crush of Amy Poehler’s character Susie. Who knew Jai Courtney could be so funny??  He did a great job.  Also, despite my slight criticism of the way the show emphasized Mark Feuerstein and Sarah Burns’ new characters in the early going, both of them did great work and were, in the end, fun additions to the group.  (Also, apparently that was the great Joshua Malina as Deep Throat!!  I didn’t recognize him!)

* Once again Christopher Meloni was the show’s secret comedic weapon.  I loved every instant he was on-screen.  His one-man fight with Mitch (the can of mixed vegetables) was hilarious!

* Speaking of Mitch, H. Jon Benjamin has always been great as the voice of Mitch/the can of mixed vegetables, but he really hit it out of the park here.  I love how much fun crazy stuff they wrote for Mitch in this new mini-series.

* I was not expecting to see Chris Pine or Jason Schwartzman return, but I’m thrilled they were back!

* I am not a huge fan of the ending, which read to me like the writers being too lazy to attempt to bring all of the show’s story-lines to a satisfying conclusion.  Some of the jokes in that sequence were funny — particularly when the characters started pointing out all of the show’s inconsistencies — but I’d have preferred had David Wain and Michael Showalter and their team done the harder work of actually weaving all of the disparate story-lines together in a way that made sense and was satisfactory.

* More than that, my disappointment with the ending is the way the show seemed to abandon all of the romantic story-lines that I’d thought they were trying to get us to care about.  This season developed a whole new story-line about J.J.’s secret love for Claire, and I bought into that.  But then Claire goes back to Mark in the end, the scumbag who has been cheating on her with literally hundreds of women?  Also: we’ve spent a movie and two eight-episode mini-series rooting for the relationship of Coop and Katie to finally work out… and then suddenly we’re supposed to be happy that Coop gets together with his book editor??  I am all for the show being unpredictable, and playing with our expectations, but these cop-out developments at the end were a let-down for me.

* Getting back to the positive, David Hyde Pierce’s one-scene cameo was perfection!!  I am glad they worked him in!

Wet Hot American Summer: Ten Years Later didn’t do it for me quite like the first mini-series (First Day of Camp) did, but I still enjoyed the heck out of these eight new episodes.  Getting to spend four more hours with this phenomenal ensemble of hilarious men and women was a pleasure.  I’d love to see more.