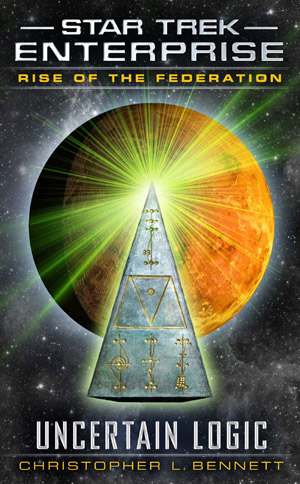 Several years ago, author Christopher L. Bennett began a new series of Star Trek novels, subtitled Star Trek: Enterprise: Rise of the Federation.  Set a number of years after the events of the prequel show Star Trek: Enterprise, and immediately after the founding of the United Federation of Planets, this series set out to chronicle the early years of the Federation, showing us the step-by-step journey in which this new interstellar alliance became the peaceful, exploratory organization we would get to know in the classic Kirk/Spock/McCoy Star Trek series, set a decade later.

This is the prequel series that Enterprise should have been, asking the tough, interesting questions about how the benevolent Federation might have come to be, and what challenges this young alliance might have faced.  I loved Mr. Bennett’s first two Rise of the Federation novels, A Choice of Futures and Tower of Babel.  But then I got busy and fell behind.  The recent release of the fifth novel in the series prompted me to go back and start getting caught up.  After rereading the first two books, I dove right into the third novel, Uncertain Logic.

This novel explores the ramifications of the discovery of Surak’s original writings, called the Kir’Shara, and the reformation of Vulcan society chronicled in the fourth season Enterprise three-parter “The Forge,” “Awakening,” and “Kir’Shara.”  Those three episodes were terrific, and they did much to explain how the often-emotional Vulcans seen throughout the Enterprise series could someday become the more emotionless Vulcans we’d seen on previous Trek shows (set 100 and 200 years later).  (It’s possible the Enterprise showrunners always intended there to be an “arc” to their depictions of Vulcans, but I think the bizarre, emotional way that Vulcans were so-long portrayed on the show was one of Enterprise’s many weaknesses; a mark of poor writing and poor acting/directing choices.  I love that this three-parter late in the show’s run was able to finally address this apparent inconsistency.)  But, of course, it’s impossible for any society, even one as based in logic as the Vulcans, to go through a massive change without there being problems and resistance from some quarters.  Uncertain Logic (the book’s title cleverly borrows a line spoken by Spock’s father Sarek in Star Trek III: The Search for Spock) explores this, showing us the debates that still rage across Vulcan a decade after the Kir’Shara’s discovery as to the direction in which their society should go and, specifically, whether their new bent towards pacifism is truly logical.  When the Kir’Shara is apparently exposed as a fraud, and a villain thought long-dead returns, Vulcan society threatens to unravel, leaving Captain T’Pol and the crew of the U.S.S. Endeavour to struggle to keep the peace and discover the truth about the true writings of Surak.

The novel’s second main story-line is a sequel to the second-season Enterprise episode “Dead Stop,” in which the Enterprise encounters a fully automated space station that uses the brains of sentient beings as its core computer-processors.  Captain Malcolm Reed, First Officer Travis Mayweather, and the crew of the U.S.S. Pioneer discover that there are many more of those automated space stations out there.  Horrified at the thought that this technology, called “The Ware,” has been used to subjugate planets and species, Malcolm and his crew seek to find the source of this dangerous threat, while doing whatever they can to help planets overrun by the Ware to throw off its shackles.

Finally, in a third story-line, Captain Bryce Shumar and the crew of the U.S.S. Essex have an unfortunate first contact with the Deltans, the race to whom Lt. Ilia from Star Trek: The Motion Picture belongs.

I loved this book.  It was a pleasure to dive back into this “Rise of the Federation” story being woven by Mr. Bennett.  Uncertain Logic stands on its own, but it flows beautifully from the first two books in the series, continuing a variety of story-lines (both character-centric and larger stories of interstellar politics and the situation of the fragile young United Federation of Planets) while also leaving things open to be continued in the next book.  I love that Mr. Bennett has thoughtfully chosen episodes from Enterprise that left room for follow-up.  The Vulcan story-line is a doozy, and one that makes a lot of sense to explore.  As great as that Enterprise three-parter was, surely that couldn’t have been the end of that story, and Mr. Bennett digs deeply into considering what might have happened next on Vulcan.  I was surprised that the events of “Dead Stop” became fodder for such a meaty story-line in this novel (and, based on where this book ends, surely the next novel as well), but upon some consideration it makes perfect sense, as that automated space-station filled with advanced technology certainly couldn’t have been one of a kind.

As always, Mr. Bennett’s novel demonstrates that he has put a tremendous amount of thought into the story, with an incredible attention to detail from across the Star Trek canon.  Time and again in reading this book, I was delighted that Mr. Bennett wove into his story ideas and events that connect to characters and situations from across the Trek movies, TV shows, novels, and more.  Captain Shumar and his crew were mentioned in the TNG episode “Power Play” as having been lost in 2167, so I love how Mr. Bennett has fleshed them out in these novels set in the early-to-mid 2160’s.  Ilia’s comment in TMP about “sexually immature species” has prompted much speculation and writing in non-canonical Trek stories to explore the Deltans and what they are all about, so I love how Mr. Bennett has explored, in this novel, how easily the first contact between Starfleet and the Deltans might have gone wrong.  I have enjoyed how Mr. Bennett has involved Tobin Dax (the second host of the Dax Symbiont) in these novels, and also with the careful way in which Mr. Bennett has crafted Tobin’s story-line to incorporate the various references from across the run of DS9 to the many children fathered/mothered by the Dax symbiont’s hosts.  That clearly impacted where Tobin’s story goes in this book.

As with the previous two novels, Uncertain Logic continues to explore how a unified Federation government, as well as a unified military/exploratory force (Starfleet), could have come together from the Federation’s founding planets.  I love all the little asides and digressions throughout the novel that explore these issues, showing how carefully Mr. Bennett has considered these aspects of his world-building.  We see how Federation starships have mixed crews (T’Pol’s first officer is an Andorian, and a key member of Captain Reed’s crew is a Tellarite), while at the same time the different alien races have focused on different aspects of Starfleet’s mission, with human ships often taking the lead in exploratory missions while Andorian ships take the lead in the defense of the new Federation’s borders.  It makes sense that the integration of the Federation and Starfleet wouldn’t have been easy or instantaneous, and I love the detail with which Mr. Bennett charts the step-by-step process by which the Federation we’d come to know in Kirk’s era, and later Picard’s, might have come to be.

* In my review of Tower of Babel, I commented that I hoped Sarek would be involved in the next book.  I had my timing off somewhat, but I was pleased that Mr. Bennett involved Sarek’s parents T’Rama and Skon in the story.

* As I have written in my previous reviews, I was happy that Michael A. Martin and Andy Mangels’ previous Enterprise novels undid the terrible Enterprise finale and revealed that Trip Tucker wasn’t really dead.  However, I haven’t enjoyed the story-line given to Trip, of being trapped in service to Section 31.  It’s been hard to read about this great character separated from his friends and family for so many years.  I understand the story-problem, that Trip can’t magically return to life and service in Starfleet, because if he had, then Riker and Troi would have been aware of that in the Enterprise finale.  I’ve nevertheless been hoping that Mr. Bennett would be able to find a way out of this story-trap, and Uncertain Logic gives us our first hint that perhaps this might be possible, as we see Trip, under an assumed identity, take a temporary assignment on board Malcolm’s ship the Pioneer.  It’s great seeing Trip back on a starship, and back working with Reed and Mayweather.  I am eager to see where this story goes in the next book.  It’s a drag seeing this character so unhappy; I hope Trip will someday be able to get something approaching a happy ending.

* I wish that the sequences set on the alien planet Vanot, with Travis undercover in an attempt to help defeat the Ware, had been expanded upon.  I like the spotlight on Travis, and I liked getting to know the Vanotli characters, but I didn’t feel we spent enough time with those characters to invest in that aspect of the story-line as much as I think we were supposed to.

* I loved seeing “Abramson” — clearly the immortal from the Original Series episode “Requiem for Methuselah”!  That was great.

* I enjoyed the small romantic story between the Pioneer’s historian Sam Kirk and armory officer Valeria Williams that ran through Mr. Bennett’s first two “Rise of the Federation” novels, and I was a little bummed that story wasn’t much featured in this book.  I hope we return to those two characters and their relationship in the next book.

* I loved catching a few references to Spock’s World by Diane Duane and Sarek by A.C. Crispin, two earlier Trek novels notable for the way they explored Vulcan society and history.  I love Mr. Bennett’s attention to detail!  (I need to go back and re-read those books!!)

* Am I crazy, or did Mr. Bennett include a suggestion as to how Voyager could keep replacing its many shuttlecraft that kept getting blown up or lost over the course of that series?  Nice Trek in-joke!

* I was delighted to see V’Las again; his final fate was left unclear by the ending of “Kir’Shara,” so it was lovely to see that major dangling plot thread finally addressed.

I loved Uncertain Logic, and I am already reading book 4 of Mr. Bennett’s “Rise of the Federation” series: Live By the Code.  I’ll be back soon with my thoughts on that novel.