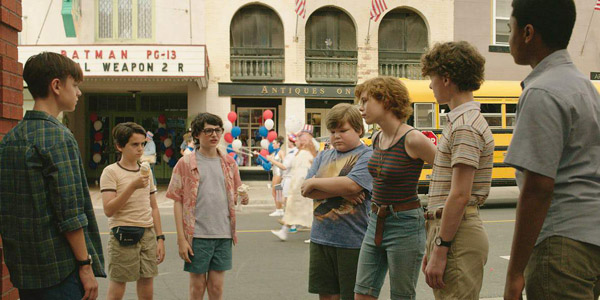 Stephen King’s lengthy novel It is a masterpiece, a rich, expansive saga that is horrifying and deeply moving in equal parts.  It is one of the finest novels I have ever read.  I was dubious that a film adaptation could satisfactorily distill this complex novel into a two-hour movie, but somehow Andy Muschietti’s film manages this near-insurmountable task with an impressive degree of skill and grace and class.

In the summer of 1987, a group of seven twelve-year-olds in the small town of Derry, Maine, discover a terrible evil within their town.  These seven kids each struggle with difficult home lives and vicious local bullies.  But those terrors pale before the monster that seems to be a part of their town, a creature that can take the form of their greatest fears and that often manifests itself in the form of a horrifying clown.

The fantasy and horror elements of the novel It are compelling, but what makes the novel such a riveting page-turner is the way Stephen King brings each and every one of the book’s large ensemble of characters to such rich, fully-realized life, most particularly the six boys and one girl in the “Loser’s Club” who find themselves the only ones capable to fighting this terrifying evil.

The film adaptation works because of how well it is able to do the same thing.  You need to love these kids, and I was impressed by how well the film accomplished that goal.  All seven young actors are phenomenal.  Absolutely phenomenal.

Jaeden Lieberher plays Bill” Denbrough, whose younger brother’s murder at the hands of It is the story’s inciting incident.  Mr. Lieberher was terrific last year as the super-powered boy in Midnight Special, but this is a far more involved role.  He’s perfect as the honest, sensitive but haunted Bill.  Jeremy Ray Taylor plays the heavy, lonely Ben Hanscom.  The idea of the sweet, fat outsider kid is somewhat cliche at this point, but Mr. Taylor brings such warmth and genuine open-heartedness to the role that he is perfection as Ben.  You cannot help but love this kid.  Sophia Lillis is amazing as Beverly Marsh, the one girl in the Losers’ Club.  It’s hard not to fall in love with Bev in the book, as Bill and Ben both do, and Ms. Lillis’ performance inspires the same feelings of affection, as I found myself rooting for Bev more than even any of the boys.  Bev in the book and the film is different from the boys not because of her gender, but because she is the one of the group who is first aware that she is beginning to leave her childhood behind.  This leaves her feeling even more scared and trapped and alone than any of the boys, which is why her discovery of this group of friends is so profound.  Ms. Lillis brings all of these deeper aspects of Bev to amazing life.

Finn Wolfhard plays the fast-talking Richie Tozier.  It’s a hoot to see Mr. Wolfhard, who played Mike Wheeler in Stranger Things (which was a loving homage to the stories of Stephen King) now appearing in this Stephen King adaptation!  Whereas Mike in Stranger Things is quiet and sweet, Richie is more of a motormouth, but Mr. Wolfhard is terrific in this different type of role.  His delivery of Richie’s dialogue really sounds like he’s just a kid messing around with his friends and trying to sound like a big-shot.  It’s great.  Jack Dylan Grazer plays the asthmatic Eddie Kaspbrak.  I love Mr. Grazer’s interpretation of Eddie, which was a little different from what I was expecting but it works perfectly.  (Have you noticed I am using that word, “perfect,” a lot in describing the cast??)  Rather than playing Eddie as sickly, Mr. Grazer plays him as almost as fast a talker as Richie, and I love the way the two characters bounced off of one another.  Wyatt Oleff plays Stanley Uris; I was intrigued by how the film played up Stan’s Jewishness more than the book did.  Stanley is one of the least fleshed out of the kids in the book, and that is sort of the case in the film as well, though Mr. Oleff did great work in giving Stanley a personality different from the other boys.  Finally there is Chosen Jacobs as Mike Hanlon.  Just as Stan was the only Jewish kid in the town, Mike was the only African-American.  Mike gets short shrift of all the boys in the film.  This is sort of the case in the book as well, where Mike is far more significant to the events of the adult half than the kids half — here in the film, without that adult half, Mike is left with not much role to play in the part.  But just like Wyatt Oleff as Stan, Mr. Jacobs does terrific work and makes Mike into a full character even with a lesser role in the over-all story.

It is a story about growing up, about that moment in which one leaves childhood behind and takes that first, tentative step into adulthood and the wider world beyond.  As in the best fantasy or sci-fi stories, the fantastical elements are an allegory.  The film understands this, and while we get to see Stephen King’s nightmarish scenarios brought to life in a glorious, big-budget way, the film never loses focus on these kids.  The story works because you love these kids, and because they feel real, their struggles and their hopes and their fears.

But also, wow, what a delight it is to see Stephen King’s world brought to life in such a big-budget way!  The film looks gorgeous.  The fictional town of Derry is brought to perfect life, with the main landmarks from the books (the barrens, the Standpipe, etc.) realized nearly exactly as I had imagined them.  The period setting is well done, accurate without being too in-your-face garish.  And the horrific moments of monster terror are beautifully realized.  There are several it-will-be-hard-to-unsee moments of horror in the film.  My personal favorite comes late in the movie, in which you see Pennywise’s face unfold into a flower-bloom of teeth, with the “deadlights” (an important concept from the book that the film references for fans without dwelling on) gleaming within.  Wowsers.

I haven’t said much about Pennywise yet, but let me assure you that Bill Skarsgård’s work is just right.  He plays Pennywise with a mischievous glint that keeps the character interesting (as opposed to being one-note) and shows how he is able to seduce kids into his swag, while also being nightmarishly creepy.  Mr. Skarsgård is able to shift Pennywise from jovial into outright terrifying on a dime.  This is a great performance.

The filmmakers made an important creative choice to only adapt half of the novel, and they were wise to do so.  The book tells two interwoven stories: of how the Loser’s Club discovered and fought Pennywise in 1957-58, and how they returned to the town 27 years later as adults to once again confront that evil in 1984.  The film focuses only on the kids’ half of the story, updating the setting to 1989 so that the planned sequel film can tell the second half of the story set in present day.  Telling both halves of the story in one film would have been impossible, and I am relieved the filmmakers realized that, giving the kids half of the tale enough room to breathe in this first film.  I also think the choice to update the timeframe is wise, with this first half still feeling like a flashback without feeling too ancient.  (It will be interesting to see how the sequel updates the rest of the story to the present-day setting, with cellphones and computers and other modern technology.)

Even only telling half the story, there is still a TON of story to fit into a single film, and for the most part I was happy with the way the filmmakers condensed and trimmed the tale to get it down to one-movie-length.  The one unfortunate side-effect of this effort to condense the story is that the film is sometimes left with a bit of a feeling that too much happens too fast.  The novel takes place over many months, whereas most of the film — until Eddie breaks his arm — feels like it all takes place in a single day or two.  This occasionally results in the story feeling overly rushed as, for example, we see Ben terrified by Pennywise in the library and then, seconds later, terrorized again by Henry Bowers and his gang of bullies.  But it all works.

My only real complaint with the liberties taken by the adaptation process was how, by having Bev kidnapped by Pennywise at the end, they turned this wonderful, powerful female character into a damsel in distress.  And then she has to get kissed in order to be woken up?  Blech.  I didn’t like that change at all.

But other than that, this film is a truly impressive adaptation of a wonderful but very complex and hard-to adapt novel.  I was continually delighted by the film’s choices.

* I’m glad we got to see Silver in the film, though I was bummed that the bike didn’t play any role in the story as it did in the novel.

* Jackson Robert Scott was fantastic as Bill’s doomed younger brother Georgie.  Holy cow was that kid perfect!!!  This is a small but critical role, as it sets the stage for everything that follows, and Mr. Scott, in his perfect-looking little yellow raincoat, was fantastic.

* I love the way this film was told from the kids’ point of view, with adults barely present or, if they were seen, either entirely unhelpful or sources of as much terror as Pennywise.

I was worried about this film project, as I followed it’s sometimes-difficult path towards production.  I was thrilled when Cary Fukunaga (who directed every episode of the amazing first season of True Detective) was attached to direct, and saddened when he left the project after clashing with the studio.  But it turns out that Andy Muschietti was just the right person to helm this film.  It’s funny that It arrives a year after Stranger Things, which was so strongly influenced by the work of Stephen King.  Both Stranger Things and It are period-piece stories about a group of intrepid, loser, bicycle-riding kids in a small town who uncover and fight a dangerous monster.  Both are coming-of-age stories wrapped in nostalgia.  I loved Stranger Things, but it is a delight to see that series’ original inspiration brought to life so faithfully and so compellingly on the big screen.  I was delighted by this adaptation of It, and I cannot wait to see the second half of the story brought to life in the sequel.  I hope they stick the landing!!